Summary: The purpose of this review is more a demonstration of the potential of the Thunderbird than a recommendation to buy this particular configuration. We found that the TBird holds its own against the
PIII in Win98, but did extraordinarily well running under Windows 2000. The amount of RAM also makes a considerable difference in high-end applications; another 128Mb can increase certain benchmarks as much as
going up 200Mhz in processor speed.

The processor: TBird, as mentioned. Northwind GFD 2.0 used. Generates a lot of heat. Water tube from CPU was a bit more than slightly warm to the touch. Despite this, ran well enough at 1007Mhz. Occasional problems
with 3DMark indicates it was being pushed close to the maximum. Additional voltage to 1.95V did not help in going further.

The motherboard: Asus K7M AMD 750 chipset motherboard. Capable, but quirky. BIOS revision 1009 essential for use with T-Birds, otherwise, processor runs at about 15% the normal rate. FSB overclocking capacities very limited; 110Mhz would not go, and other users report that inability typical.
As a older board, does not give you the option of running RAM at 133Mhz. AGP is a bit of a mess for serious gaming. Finally, just does odd things every once in while; didn’t like a certain keyboard, doesn’t always like working with a modem.

The memory: 128 and 256Mb Micron PC133 CAS2. The type of memory is overkill for this system, but, as you’ll see, the amount for certain tasks isn’t.

The hard drives: 20 Gb IBM 75GXP. Came close to stealing the show from the TBirds with stellar performance while sounding more like a mellow mosquito than a hard drive. However, the IDE controllers left much to be desired, so I instead used a Promise Fasttrak 66 RAID card and spanned the one drive (essentially treating it as a PCI IDE controller).

The video cards: Two were used, a Leadtek GeForce2 GTS and Matron G400. As you’ll see, probably not a fair platform to judge gaming performance of either the TBird or the GeForce2. The plain vanilla G400 handled the other benchmarks just as well as the Leadtek.

The Operating Systems: Windows98 SE and Windows 2000. Windows 2000 is a resource hog. So is a Ferrari. But give either what it wants under the right conditions, and they will fly.

First, the Sandra benchmarks at 1007Mhz: 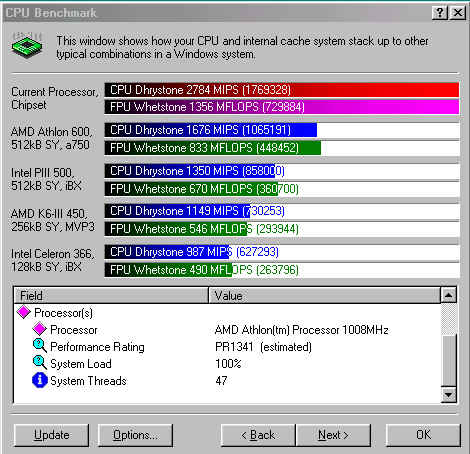 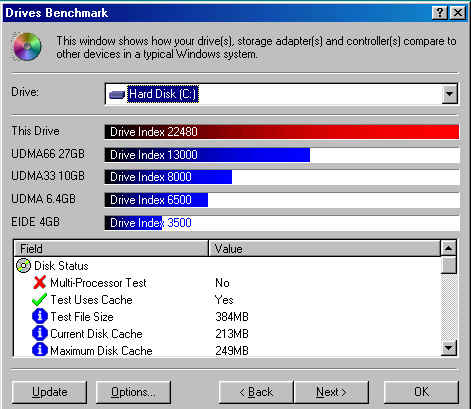 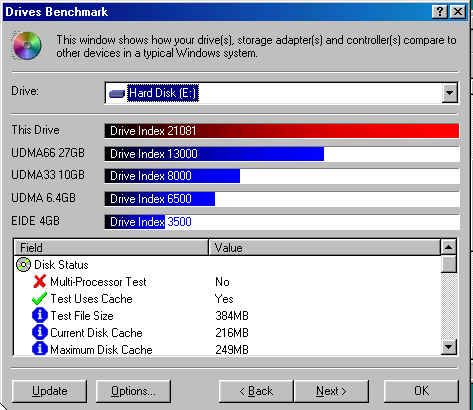 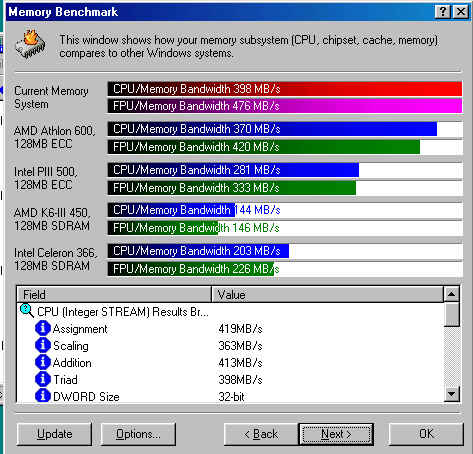 Keep in mind that the memory test was run at only 106Mhz. From what we’ve seen from Duron scores, and as likely, you’ll be able to run at 124Mhz or better with a motherboard like the KT7, these scores should easily exceed BX standards.

Why two hard drive scores? Just to make you aware of a little trick of the trade. Sandra (and other hard drive benchmarking) scores are heavily affected by how you partition your drive. Most benchmarks test (or use by default) the inside sectors of your hard drive, the quickest part of the drive. At set intervals further out of the drive, speeds drop off.

For instance, the IBM 75GXP drops off from about 36-37Mb/sec on the inside tracks to about 24Mb/sec on the outermost tracks.

Tip: Put the programs/data that really benefit from fast disk access as close to the center as possible. Partition a relatively small C: drive and put your OS and critical programs and data there.

When I test, I usually make two small partitions (2-3Gb each) to hold Win98 and Win2000, then have a third partition hold the rest of the drive. The first Sandra test tested the first 2Gb of the hard drive. The second test operated over the last 15Gb.

On to the Win98 benchmarks:

Video: The K7M was not the optimal platform for video testing. There are AGP issues with AMD chipset. When I ran Quake, I got 125fps no matter what I did, changing resolutions, overclocking the video card, nothing seemed to matter. I was getting about 6400 3DMarks in Windows98, but a lot less in Win2000. Wasn’t even sure I was running in AGP2X mode.

If you already have a K7M, you’ve fought through the AGP issues. If you don’t, you’re unlikely to buy a Slot A TBird or this mobo anyway. We’ll save the serious video review for the newer Socket A equipment.

However, Slot A CPUs and mobos handle more work-oriented benchmarks quite well, so let’s see how it did.

The T-Bird was tested at 800 and 1Ghz (actually 795 and 1007Mhz) using 128Mb and 256Mb RAM; resolution 1024X768 at 16bit (actually, different resolutions and color depth does affect the ZdNet benchmarks a few percentage points.

You can see the IBM 75GXP does much better than their one-year old grandfather, the 22GXP, roughly about
50% in Win98. In fact, a single drive does better than two 22GXPs in a RAID configuration. (We will have a RAID review next week.)

With one big exception, Win98 isn’t affected much by extra memory, in fact, the Winbench scores with 256Mb of RAM (with the big exception of Sound Forge)tended to be slightly less than with 128Mb (though within random variation). Business Winstone saw slight improvement.

However, Content Creation got a significant boost from the extra RAM, about 10%. This is nothing to sneeze at, it’s about the same amount of improvement you get going from 800Mhz to 1Ghz.

On the whole, the TBird holds its own against the PIII in Win98. As you’ll see next, though, Windows 2000 is a different story.

The IBM 75GXPs do even better against granddaddy in Win2000 than they did in Win98. No respect for its elder.:)

Again, with the exception of Sound Forge, which apparently like extra RAM, no big

Business Winstone doesn’t show any significant TBird advantage, but when you go to High-End Winstone, the TBird smashes the PIII, even after allowance for the slower speed of the PIII.

Windows 2000 is not too good with just 128Mb RAM, whether it be PIII or TBird. The OS alone chews up about 70Mb. If you do any kind of graphics work, things slow down a lot.

However, give it 256Mb, and the TBird jumps way ahead. An 800Mhz TBird does over 20% better than a 733 PIII, far greater than the difference in Mhz, and with a 27Mhz FSB handicap.

Some of that is due to the improved hard drive, but the hard drive doesn’t spin too much during these tests.

Now take a look at this:

In both cases, extra RAM boosts TBird performance by more than 10%. Note that the TBird at 800Mhz and 256Mb RAM actually does better than a TBird at a 1Ghz and only 128Mb.

Some of you are probably hollering that this is hardly a fair contest without a 1Ghz PIII in the fray, and in time, we’ll do that comparison.

But in the meantime, look at this (and keep in mind the two were about even in Win98):

So if you do the kind of work that Content Creation covers, and you do it in Windows 2000, you definitely have to give the TBird the most serious consideration if you’re getting a new machine in the near future.

The Willamette Celeron can be overclocked, too. — Ed

An Enema for the Anal-Retentive