For 7 years now, XtremeSystems has held a party every year to coincide with the international Consumer Electronics Show in Las Vegas. This year was my first attending CES, and I took the opportunity while in town to join Fugger and his gang of miscreants at the XS party to enjoy some good company, warm food, cold drinks, and frozen processors. While this wasn’t an Overclockers.com event, I’m happy to cover it as thanks to Fugger for the hospitality and as thanks from the Overclocking community for a great event.

So why should you be interested? Thanks to [email protected], I’ll let this Republic of Gamers video intro wet your Overclocking appetite.

It’s my understanding that Fugger (aka Charles) has known a lot of people in the industry for quite some time and has dependably put on this event annually which helps to obtain some great manufacturer support. Asus provided a ton of motherboards and graphics cards, while Corsair and Intel provided supporting hardware. MSI and Gigabyte brought a couple bands and secured the venue. Prizes were generously handed out provided by AMD, Danger Den, Futuremark, Intel, Kingpincooling, Kingston, Mountain Mods, Nvidia, Swiftech, Thermaltake, and Western Digital along with pitching in for the entertainment!

Also in attendance were some water cooling fan favorites around here – DangerDen, Swiftech, EK, and the founder of Petra’s Tech Shop. Possibly a once in a lifetime group shot here! 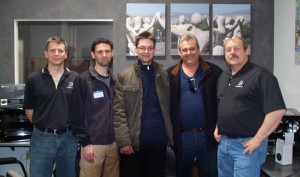 Pardon me for geeking out, but those of you who have been around for a while may remember the guys in that picture from when their businesses were just making a names for themselves. These are some legends in bringing quality water cooling and case modifications to the masses starting from grass roots shops. Jeremy and Gabe mentioned to me how Overclockers.com impacted their businesses in their early years when Joe Citarella reviewed their cooling stuff – a bit of history around here whose significance even I wasn’t familiar with, though I’ve been a daily reader since 2000. A really cool thing to hear in person!

But wait, don’t go away – it wasn’t all geeks like me in attendance! While the mess of cables, thermoses, and parts laying everywhere did plenty to make things look complicated or difficult… Our saving grace Cory arrived in the evening to pour some LN2 and show everyone how to make it look easy!

Now I’ll spare you further presentation. Checkout the following pictures, captions, and videos for an overview of what the event was like. First hand, I can tell you it was a blast – thanks to Conumdrum and Gofaster87 for making sure I got there, and thanks to Fugger for putting this together and welcoming all who walked through the doors! 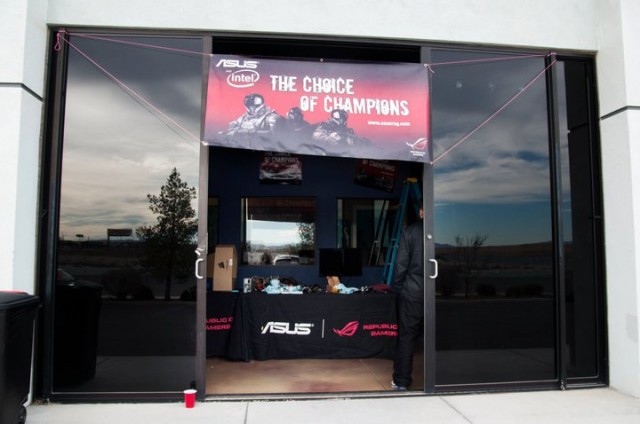 These shots should give you your bearings around Pictographics, Fugger’s shop where he graciously hosted the event.

Inside the front door where Shamino, Gautam, Brian y., and Gomeler were hard at work on Intel platforms

The back room where chew* and nemesis were beating on an AMD platform, V2-V3 was doing some Intel work, and many folks were just hanging out

View from the front room, across the hallway, including the back room

Down the hall, Gigabyte and MSI tables setup, with Trouffman from Overclocking-TV and friends chatting with Francois from Intel

The most extreme setup in attendance was ran in the front room, closest to the 180L LN2 dewars just outside the front door. What does it take to chase down a new 4-GPU world record in 3DMark Vantage – Performance? Aside from the hardware listed below, it takes some serious benchmarking knowledge which Gautam, Shamino, and Brian y. were prepared to deliver. LN2 with some extra GPU voltage helps a lot too, and no one is known to deliver in that department the way Shamino is. The pictures below detail four voltage regulation circuits harvested from GTX 480’s, modified to deliver additional voltage (2.1V) to the GDDR5 on each of four GTX 580’s.

A short clip from Petra of this rig in action:

Hard at work in the corner next to those guys, Gomeler was diligently plodding away on another X58 platform. This guy was a warrior, benching mostly non-stop independently for around 12 hours straight.

Putting in work in the back room, chew* and Nemesis were beating on an AMD 1100T rig powering 3 volt-modded GTX 580s. AMD boards don’t natively support NVIDIA SLI, but thanks to the Lucid Hydra chip on Asus’ Crosshair IV Extreme thats not a problem. Despite the guys having to overcome some challenges delivering enough power to the cards, they managed to push the highest AMD 3DMark Vantage – Performance score thus far quite a bit higher, without pushing the graphics clocks as hard as possible. Their full rig specs were as follows: 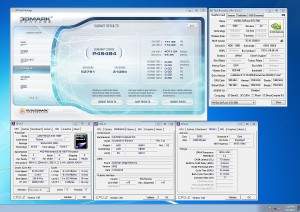 The best 3DMark Vantage - Performance score on AMD, chew already plans to top it soon however

Finally the last benching station also in the back room was that of V2-V3, where he was running Sandy Bridge under water cooling. Sound tame compared to the rest of what you’ve seen? A nice pair of Asus Ares 5970 GPUs added the secret sauce to make things a bit more exotic.  Later on to fit in with the crowd, things were switched out to LN2 on the CPU with 3x Asus 6970s which posted some respectable benching results.

Jeremy from Danger Den took a moment to detail their new reservoir product, designed to enclose the popular Laing D5/MCP655 pumps. It really looks like a slick product, and includes color options and lighting to match your case aesthetics. Check out the video by Dazmode for Jeremy’s full description and availability.

The following video is from Dazmode and features various facets of the event, including a conversation at each benching station, Planet from Corsair blowing LN2 smoke, and it closes with live music from Apocalipstick.

Wrap Up, Additional Info and Media

To wrap things up, I’d like to thank everyone who agreed to share their media with Overclockers.com and help to get this event the exposure it deserves centralized in one place. As details here were researched or gathered via email and PM, corrections and further info is welcome. If interested in additional pictures and details, please reference the following links.

While this article reused a lot of material that was already out there scattered across various sites and buried in forums, thanks for reading and I hope you found it worthwhile and interesting! Thanks again to all the sponsors, everyone I had the pleasure of meeting at the party, and Fugger for making it happen.