Not a long while ago, on September 29th, the new, current version of the most popular video cards benchmark software, 3DMark05, was released.

The software has gone through a long way since her first versions, 3DMark99 and 3DMark2000 (which have been pretty simplistic benchmarks; the first used DirectX 6, the latter advanced to DirectX 7), featured a new dimension to performance measuring for our PCs and for the first time not from the CPU’s point of view, that until that period of time was for many the most important component of the computer system (anyway, there wasn’t a lot of space for maneuvering with the graphic cards of 5-6 years ago that were pretty primitive).

Although these programs have provided a new way to scale performance, they couldn’t really isolate the graphic card’s influence from the CPU’s. That dragged the score down dramatically if you had a weaker CPU or pushed it up if you had a performance beast.

2000: 3DMark2000 sees first light: the software used the relatively new T&L technology that has been featured in NVIDIA’s new graphic cards. The software keeps using its MAX-FX engine but advances to DirectX 7.

2003: 3DMark03 is released – the software moves to support DirectX 9.0 and soon the competition in the graphic cards market between two of the main companies becomes a bitter war: NVIDIA releases its “magic” drivers that brought a huge “improvement” to its graphic card’s scores – we’re talking about the drivers that optimized specially for 3DMark03, and not a real performance boosting drivers.

Futuremark (changed its name from MadOnion just a year before) had to release a special patch for the software to prevent score cheating. The entire situation just showed 3DMark’s main role in determining and scaling the graphic card’s performance.

29.09.2004: 3DMark05 is released to the wide audience – support for DirectX 9.0c and for Shader Model 2.0, 2.0a, 2.0b and 3.0 is included within it, an addition that completely changes the results of the last generation graphic cards and also takes the new generation cards (GF6x00 & RXx00) to the front line battle. Also, an Artificial Intelligence influence test infiltrated to the benchmarks. The software uses a graphical engine that Futuremark developed by itself.

In the following article we will test 3DMark05 to find out exactly how the generated score depends on the main hardware components of the computer system.
{mospagebreak}

For our tests, we made use of the Catalyst 8.07beta driver for the Radeon 9600XT, since it’s the latest driver from ATI that has been approved by Futuremark (FM Approved) for use with its products.

The tests used the default settings:

Before we proceed testing 3DMark05, we’ll take a quick look at the CPU’s influence on some of the previous versions of the software.

For testing the CPU’s influence on the score in this test and also in the next couple of tests, we ran the CPU with the default 11.5 multiplier and the following FSB frequencies: 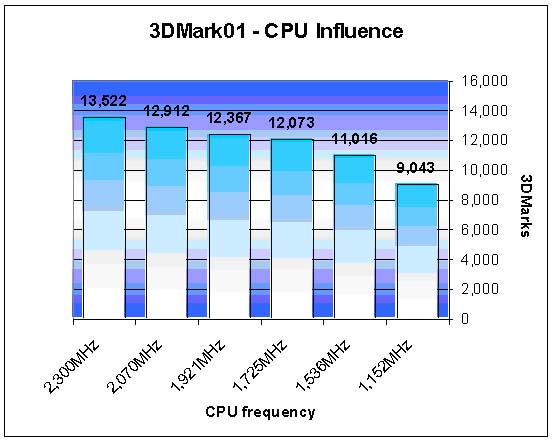 The calculation method for determining the final 3DMark01 score uses the average FPS rate of every game, giving the High Detail Games a more important part. Here’s the equation: 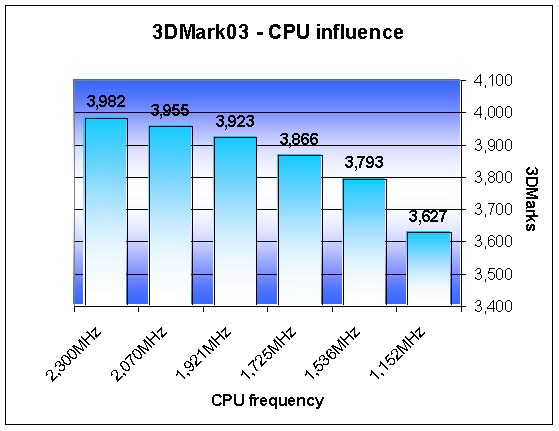 The calculation method for the 3DMark03 score also based on the average number of frames per second (FPS), but it was changed to the following formula:

In 3DMark03, you start to notice that the difference between each column is smaller (compared to the 3DMark01’s graph). It’s important to notice that since the score calculation method is different, we should look at the scores in proportion to 3DMark01 scores in order to compare between the two’s dependence over the CPU. Still, there’s a difference of over 350 points between the run of the CPU in its high frequency to the run of the CPU with the lowest frequency – a difference of almost 10% between the scores.{mospagebreak}

Here is the newest version of the software, 3DMark05, with anticipation for smaller differences (to what extent possible). 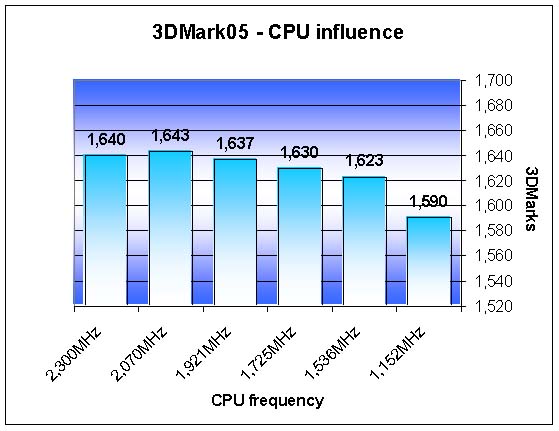 Again, also in 3DMark05, the score calculation method has changed and the average FPS number is still the basis:

3DMark05 was planned in order to give each game test an equal importance in the final score: the average FPS number of each game multiplied by the others and raising to a power of one third and multiplying again by 250.

Futuremark has definitely managed to isolate the impact of the CPU’s power over the final 3DMark score. {mospagebreak}

In order to test the importance of the amount of RAM and its influence of the final 3DMark score, we launched the test using two configurations – one with a single 256 MB Samsung PC3200 module and the second with two of the same modules (512 MB overall). The memory remained with fixed timings of 2.5-3-3-7. Each one of the configurations was tested using the FSB frequencies of the previous tests. 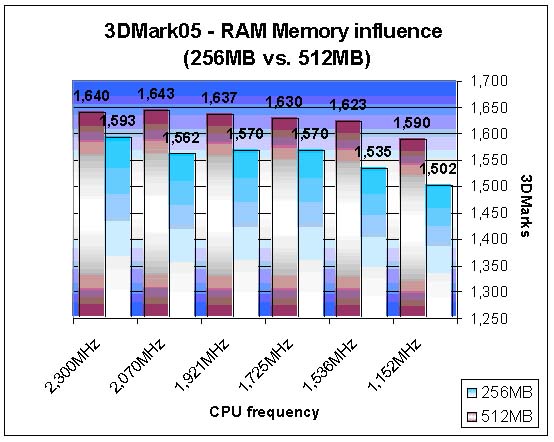 We observed that lack of memory makes a bigger impact over the 3DMark05 score (and if 3DMark05 actually reflects the demands of tomorrow’s games, it also impacts the overall game experience) than the CPU itself. If you ever thought about upgrading the amount of your RAM, you’re invited to do that in the near time.

The next test, which should indicate the influence of the graphic card memory’s frequencies influence, was made as follows: at first we lowered the memory’s frequency rate to the lowest possible while not seeing artifacts, then slowly raised it each time with jumps of about 35 MHz (as accurate as the graphic card allowed). Notice that with also included the score with the default stock memory frequency – 600 MHz. The graphic core was fixed on 500 MHz. 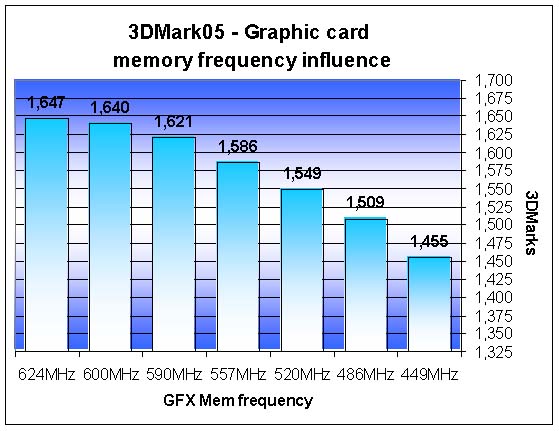 As you can see, with every raise of about 35 MHz, there’s an increment of between 26 to 55 points that becomes more moderate and smaller as the frequency increases. It makes us conclude that the speed of the memory in the graphic cards plays a bigger role in slower cards, but with cards with faster memories, the importance of a few more megahertz here and there becomes insignificant for a better mark with the software – an overall difference of almost 12% between the highest score to the lowest.{mospagebreak} 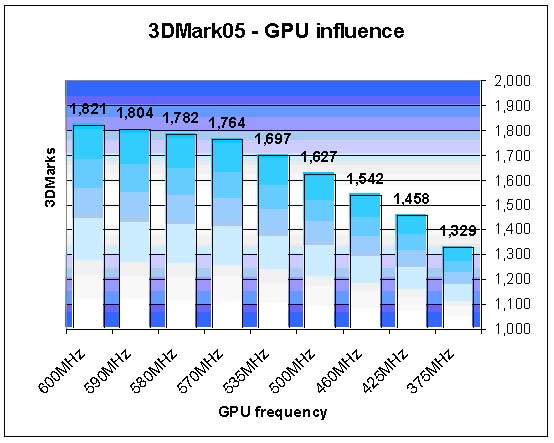 The graph speaks for itself: the GPU’s speed is the most important element of the score (and also to future game experience if the software really reflects it).

You can see that when we raised the GPU’s frequency with jumps between 35 MHz to 50 MHz, we gained score differentials of between 67 to 130 points, again decreasing as the frequencies became faster, as the test with the graphic card’s memory.

When we raised the GPU in jumps of 10 MHz each, of course we saw a more moderate rise with the score, but the differentials was of about 20 points with each jump.

Between the highest score to the lowest one, there’s a difference of 27% (!) that shows us the importance of the graphic card’s core performance above everything else. In addition, in light of those results and with the fact that we see in many 3DMark05 the benchmarks between the ATI Radeon 9×00 graphic cards series to NVIDIA’s FX series, we can understand the importance of efficient core architecture, something we couldn’t notice with previous versions of the software, and even with most games these days.

For example, in many games today the GeForce FX 5900XT will yield better performance than the Radeon 9600XT, but according to many benchmarks from the orb, we can see that the Radeon 9600XT brings at least 30% more points, even than NVIDIA’s strongest previous generation card – the GeForce FX 5950 Ultra. That’s because the 9600XT’s core was planned better, in a more efficient way.

We do not mention these details to slight NVIDIA; on the contrary – the company introduced great graphic cards that yield great performance with games these days. We just want to emphasize the importance of the GPU’s architecture planning for the future games.{mospagebreak}

A Few Words In Conclusion:

Futuremark introduces its benchmarking software as ones that are intended for gamers.

Until today, the final score of the software’s benchmarks wasn’t exactly objective as many of us would like to be in order to compare between two graphic cards on two completely different computer systems, but now with the release of 3DMark05, we have got a new, objective (more or less) way to compare this kind of systems, and keep in mind that in the most radical cases there could be a maximum deviation of about 8% if the CPU’s speed & the memory’s volume in one of the system is radically supreme or inferior.

The software also provides us with a more accurate diagnostic tool for failures and other faults and allows us to determine almost for certain if the fault is of the graphic card. 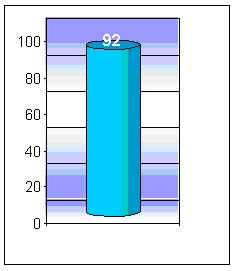 Who Are These People?

The Microsoft Situation – A Personal Viewpoint

The opinions expressed herein are those of the author and as such do not represent the views of Overclockers.com or any other individuals associated with Overclockers.com. We all have choices. This is America; if you see something on TV you

One computer shop which often puts good hard news on its site here in Moscow had run some statistics on o’cing Durons (after I had suggested to do that in a letter :). Here are the results (they have tested