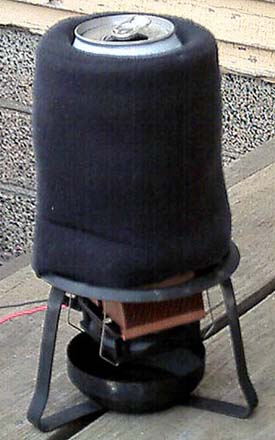 A while ago, being an over-zealous cooling newbie, I purchased a 72 watt peltier unit in hopes to send my overclocked T-bird into the realms of sub-ambient temperatures. It didn’t take much extra research to find out that this small TEC was just too weak to cool that little furnace, but I was glad to find that out before actually installing the unit.

So then I was left with an unused peltier pad and a thought in my brain.

My computer components were plenty cooled, but I retained a reoccurring problem: The endless hours of gaming or serious intellectual study (yeah, more games) often left my unattended cans of Budweiser sitting in a pool of their own sweat, only to be choked down later, or disposed of completely. This was simply unacceptable. While digging through my boxes of tossed-off computer parts the solution hit me: 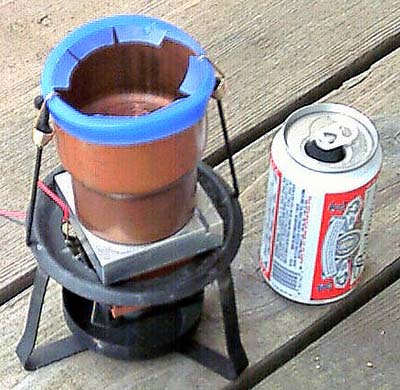 Using a spare SK-6 and the pelt, I needed to add a cup to host the beverage which I found in a copper bell-reducer, a flat block for the bottom — a machined aluminum block and a fan which was all held together by a common bungee-cord. I had a working prototype. 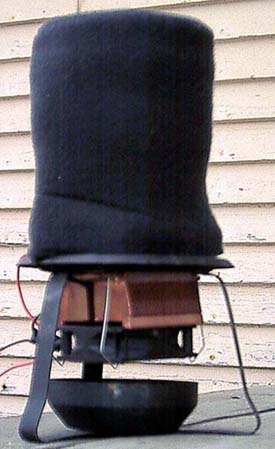 A quick stop at the fabric store yielded some foam/felt-type material for cheap insulation and a local garage sale provided the fondue pot stand that worked perfectly to keep it upright while allowing airspace for the fan. A quick solder of a 4-pin Molex connector to plug into my PSU and I had a 12v cooler that was ready for the trial run.

The aluminum block and the copper ‘cup’ held a temperature of 40-45ºF depending on ambient temperature.

Taking an unopened beer from the refrigerator, I placed it in the powered cooler for 24 hrs and then drank it. While it wasn’t completely straight-from-the-Rockies cold, it was definitely chilled enough to drink and has subsequently ended the rash of half-emptied cans on my computer desk in the morning. A better HS and a bigger TEC would surely result in colder beverages.

In search of ultimate laziness,

SUMMARY: A very nice waterblock that gave me a 100 MHz performance boost. Craig over at Cool-Computers was nice enough to send us his all copper Athlon K7 waterblock. As you can see from the pic below, this baby is