A person who does not readily keep track of computing trends might be perfectly content with a 6-month old computer. However, alas, this is not always the case with the enthusiast. As soon as I saw those fancy 64-Bit Athlons and PCI-Express, it touched a thread of jealousy within me. As the next chance to upgrade parts in my PC will be around December, I decided to start researching overclocking.

Probably one of the most useful tools for overclocking is a Raytek point-and-shoot temperature monitor. You simply point it at whatever you want, hold down the button, and a millisecond later you get the temperature to the nearest .5 degree. You can monitor in real time the increase and decrease in temperature of any part or place in your case. You can find them for about $80 at cyberguys.com. (Other places may have them cheaper.)

With the Raytek for monitoring, I decided the next thing to have would be some extra heatsinks, and a hsf to lower temps (I had discovered that many of my parts were a little toasty at load.) So, I then ordered a Vantec CCB-A1A heatsink package. The Vantec setup was originally for my Northbridge, but with all the prying and heating I could muster, I failed at removing the stock heatsink. So I decided to put one of the smaller heatsinks on the Southbridge, and then decided that the other two were destined for the video card.

It seems that my trusty Radeon’s heatsink was better designed with tabs, instead of epoxy, and it easily came off. After taking cotton swabs with alcohol, I got the original thermal paste off and then applied some new silver based, no-name brand paste for the new HSF.

The HSF went on as easily as the other came off, but I was not yet done. While monitoring temps, I found that the RAM on the video card was a little hot too, and I decided to put the final Vantec heatsink on them. 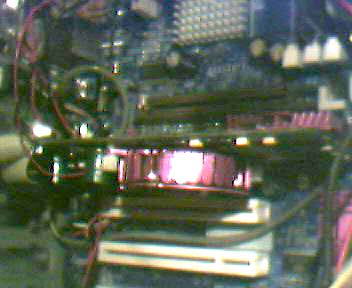 The fan and heatsink on the video card (Yes, I realize it’s a PCI card, hopefully replaced by December)

Since the thermal tape that I would have normally used isn’t the most effective, I used a combination of tape and paste. (If you are wondering, the tape is sticky to hold on heatsinks without tabs, and, as said before, the paste is more effective.)

Since I had no heatsink the correct size for the other side of the card’s RAM modules, I wasn’t able to put one there, but in testing the temperature, it seems that the heatsink on top also takes heat from the other RAM modules underneath. Thus, all is well with cooling the video card RAM.

Now, with having been defeated at replacing the toasty Northbridge, I decided on another approach. Most name-brand computers have been designed so fans and heatsinks pull air over the hottest areas; however, with a custom PC, this is not the case.

To improve this, the first thing I did was to make all the fans blow out, as this makes more components get airflow. Second, I blocked off one of the vents on the back, because no components were between it and the fan. (This is just my intuition speaking here.) 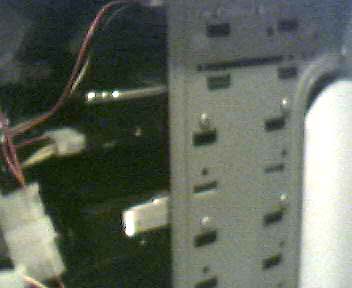 The vent blocker for the front of the case

I also blocked off part of the front vent, where air was being pulled around the hard drives, and not thru. Finally, I added a curving piece between the vent-fan and the Northbridge: 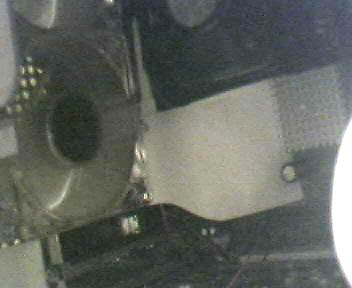 The “air flow redirecting device” for the Northbridge

This last idea was just a vague one, but I noticed it caused more air to be drawn over the heatsink on the Northbridge, and lowered the temp by several degrees.

Lastly, I decided to save money by rounding my floppy cable: 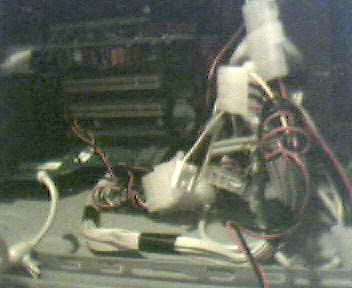 I used a razor blade to carefully cut the cable into 4 wire groups. After that, I bundled them with electrical tape and it worked perfectly. I should note that you should only do this with floppy cables, as IDE cables are much more sensitive to corruption and should be kept intact.

So I have now finished my attempts at cooling my system better in preparation for overclocking. If you are looking for how to cool your case when trying an extreme overclock, I warn you that this probably won’t be enough, but for a small to medium overclock, this should do fine. It should be noted that I have two rear exhaust fans and another side exhaust fan in my case.

Got a 750Mhz Slot A Thunderbird a while back. Using it with an Asus K7M motherboard. Did a strip-tease of the CPU, and found out that the 750 was actually a 900 core T-Bird. This pleased me. So far, that’s