I’ve gotten/seen a few notes about the number of capacitors on the back of C1 stepping PIVs.

The strange thing was that the labeling on that OEM processor was SL6DV,
which corresponds with C1 OEM chip codes, but the placement of the caps on
the downside and the amount of them was the same as in B0 chips.

Someone in our forums recently a similiar observation.

Twelve Instead of Fifteen

If you want to see a picture showing the difference, take a look at the second picture on this page. The second CPU in the picture is an original Northwood, the last one is a C1 stepping Northwood.

Now look at the second picture here. This is the back side of a 3.06. It has twelve capacitors like a PIV, but the back side is arranged more like a B0 Northwood.

What Do You Have?

If you have a C1 stepping PIV, and it’s not too much trouble, I’d like to know what sort of arrangement you have on the back of your C1 stepping CPU.

If it looks like a B0 Northwood, I would love to get a picture, front and back of it (I’d like to see the codes on the CPU, too). Please send it to me. If you can’t do a picture, please send me at least the code information and let me how you’ve done with it.

If it looks like the original C1 stepping Northwood, I’d like to know the second and third lines of code on the front of your CPU (sspec and FPO). Please send it to me and let me how you’ve done with it.

If it looks like the 3.06GHz, I would love to get a picture, front and back of it (I’d like to see the codes on the CPU, too). Please send it to me. If you can’t do a picture, please send me at least the code information and let me how you’ve done with it.

I am especially interested in Dell chips, very late model chips, and any chip that has done extraordinarily well.

I suspect you’re going to find it’s either option two or three. 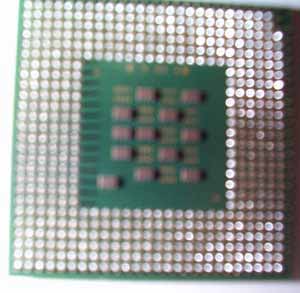 This has a capacitor arrangement identical to a 3.06. It actually is a Dell 1.8A manufactured week 40. Not incidentally, it also overclocks to 3.5GHz.

What this does say is that we need to look into this more, and we need everyone with C1s to help us out a bit to get a better idea about this.

We have a bunch of C1s that are breaking 3GHz easily. We have a bunch that aren’t. What I’m trying to do now is see if there’s any single factor that makes a difference at least a lot of the time, and pursuing a number of leads to see if we can identify those that can from those that can’t.

A few days ago, we asked about a few other possibilities. So far, a few people have been able to break 3GHz due to the suggestions, but there’s no smoking gun so far.

This is another lead. It may or may not pan out. If we knew, there would be no need to ask. There will be others.

It may turn out that there is no one big single identifying factor. There probably are quite a few little ones; the question then becomes, “Is the only big one the fact that some C1s simply can’t cut it at 3GHz?” We’ll have to see.

I’ll tell you one thing, things are getting awfully toasty with a PIV running at close to 3GHz with what has been the standard Intel cooler. Intel itself has considerably beefed up its cooler for the 3.06GHz. I wouldn’t be at all surprised if heat wasn’t a block to higher MHz at least sometimes.

Some are suggesting that there’s something inherently wrong with the 845PE chipset as it gets around or past 166MHz, but while that can’t be ruled out, there’s quite a few more likely suspects ahead of it at the moment.

For the moment, getting a fan on the Intel northbridge couldn’t hurt.

P.S. We also have a forum thread on this subject.

Do it Yourself Hard Disk Repair

Demonstrating a method for hard disk repair by replacing the read/write head from a Maxtor d540x-4k020h1 (20gb 5400 rpm, single platter) hard disk. Not for the faint of heart.

NOTE: This article is for information purposes only – neither the author or Overclockers.com will be responsible for any direct or consequential damages arising from misuse of this material. After doing some research online (thanks to Notebook Forums -notebookforums.com- for

Got this email recently: Is there any reason that you know of that AMD keeps beating a dead horse with this K10? It is obviously a disaster and they just keep trying do something with it. I just can’t fathom