One very good, one to skip. — Hoot

John “Hoot” Hill is one of our Forum’s most valuable members. Hoot volunteered to do some “second looks” at heatsinks for Overclockers.com and I’m pleased to introduce:

I will be contributing articles from time to time about heatsinks and general hardware. Air-cooled heatsinks will be tested on the setup pictured below. It consists of the following: 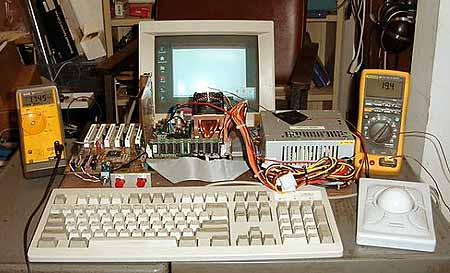 It’s not pretty, but it does set the stage for playing with heatsinks. I elected to set it up out in the open air because I am not interested in having case performance interfere with the performance of the heatsink. I keep my room as close to 20C as possible, year round. I monitor the intake air with a Thermocouple placed approximately 1 inch from the fan’s intake. It is attached to the multimeter on the right.

The core voltage can be varied with a potentiometer mounted alongside the power and reset buttons. The core voltage is monitored by the multimeter on the left, which is connected right at the CPU socket.

The core temperature is monitored via the on-die Thermal Diode using the Maxim MAX6657 IC on a module I built that plugs into the motherboard SMBus header. This provides a very accurate reading of the core temperature, compared to the in-socket thermistor, CompuNurse type strip thermistor, or even a thermocouple embedded in the heatsink base.

To stress the CPU, I have chosen to use Prime 95. It does a fair job of running the CPU at near maximum power consumption for a given speed and core voltage. I have found that the program BurnK7 runs the CPU hotter by a few degrees, but most people prefer to use Prime95.

Both the Cooler Master HHC-001 and the TSHeatronics Zen heatsinks have already been reviewed by Joe. They both use heatpipe technology to enhance the movement of the heat away from the CPU core. How effective they are at doing this, along with their ease of use, differ substantially.

The HHC-001 mounted very easily with its single lug clip system. I did not feel that my core was in danger at any time. The clip is held in the heatsink by way of a fulcrum-like retainer that is staked into the base from within the clip channel. The unit I obtained had a manufacturing flaw in it that appeared to be the result of that staking process.

When they pressed the retainer down into the base, they apparently used too nuch pressure, because the process resulted in a slight bump on the heatsink base on the CPU side, almost on top of where it sits on the core. Though you could not feel the bump, when you reflected light off of it in just the right manner, you could clearly see it. I tried photographing it with different angle and light sources, but could not capture it.

This could have caused problems with the base not sitting flat upon the entire core. Always inspect your heatsink base for finish and flatness. Speaking of finish, I found the HHC-001 to have a particularly rough finish. It looked like the base had been ground using a belt sander, with parallel scratches running from one side to the other. 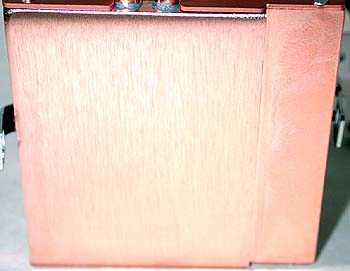 It was so rough, you could strike a white-tipped match on it. Fortunately, lapping effaced both the bump and the scratches. 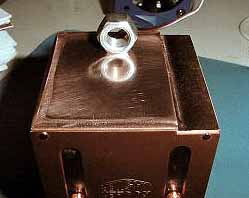 Unfortunately, in order to lap the base, you have to remove the clip from the retainer that is staked into the base. This proved easier said than done. The retainer is like a “minnow trap”, in that it is easy to snap the clip in, but took a lot of prying and fussing to get it out.

Worse yet, when I finished lapping the base, I inadvertently snapped the clip back in upside down. This blunder made it even harder to get out the second time, taking 20 minutes of twisting, prying and cursing to accomplish. Lapping the HHC-001 is well worth the effort all the same. It yielded an improvement of 3C, which, to an overclocker, is worth quite a lot.

The TSHeatronics Zen cooler is made mostly from plastic. Though a pretty mix of blue and black, sure to be a hit with people more concerned with looks than performance (ala Orbs), it did not sit right with me. Of the metal part, 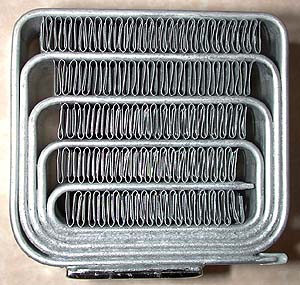 the mirror-like finish on the baseplate was good enough to comb your hair in: 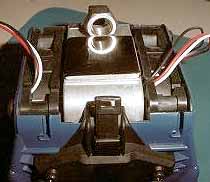 I was non-plussed by the fact that the stirrups that engage the socket lugs were plastic also. I think I prefer a sharp metal clip to the softer plastic this heatsink uses. It felt like it could pop off if you looked at it cross-eyed.

Looking at the spring-loaded metal core and cantilevered clips, one would expect this heatsink to be a joy to install. In practice, it was the Heatsink from Hell. By the time I finally got it installed, I had succeeded in rounding all four corners off of my Athlon XP1800 core.

Once I finally got it mounted and calmed down beyond wanting to use it for batting practice, I proceeded to gather data on it. Once done, I carefully removed it, packed it in a nice box and mailed it to the Al-Qaida Relief Organization (no return address).

Now, on to the numbers:

All heatsinks I write about will be held up to what I consider to be the “Gold Standard”. Not surprisingly, that is, IMHO, The Swiftech MC-462A with the Delta 80mm 68cfm Focused Flow radial fan. ‘Nuff said about that.

As Joe has already noted in his reviews, The HHC-001 is an excellent performer, especially considering it holds to, IMHO, the antiquated 60mm footprint. Conversely, the Zen, though pretty and innovative, falls “below the cut line”.

The temperatures I observed for all three heatsinks may not be what you obtain in practice, unless you run you PC spread out on a sheet of plywood in a room that is 20C and measured using the internal, on-die Thermal Diode.

The trends, however, should be reproducible. Hopefully not the chipped core!