First, let me thank Cheshire for alerting me to this. Great work!

Here’s what he sent me:

“I’m not too sure it’s gonna be such a good buy anymore… if you look at the
picture of the mobo at Tom’s Hardware, and then at the picture of the mobo
in the manual, there’s a set of dip switches missing on the one in the
manual. On the one that Tom has there’s a set of 4 and a set of 6 dip
switches side-by-side. That set of 6 is missing – and my guess is that this
is the set for controlling the multiplier lock. And the manual explicitly
states that “AMD Processors have locked frequency multiples.” So maybe Asus
have pulled the ability to unlock the multiplier to ensure they don’t piss
AMD off.

So, I downloaded the Asus manual, and sure enough, that was true. 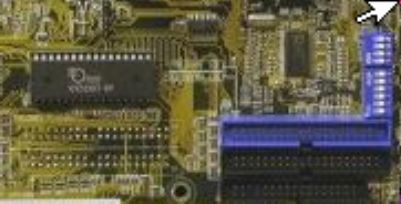 To the far right, just below the arrow, you’ll see two sets of dip switches.

Now look at a close-up of the same section from the Asus manual:

Obviously, one set of dip switches isn’t there anymore.

Look closely at that section. Better yet, let me do it for you: 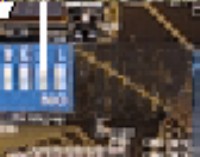 Do you notice that the area formerly occupied by the second set of dip switches looks awfully blurry in comparison to the very similiar brown area above it?

Do you notice you still see the square shape in precisely the same place where the second set of DIP switches used to be?

Could it be that what we see is an attempt to airbrush that DIP switch away?

Now you see it, now you don’t

The Asus people can’t seem to make up their minds about this, either. Their picture in the manual doesn’t show it, but their picture here does.

Look at their diagrams. Now you see it:

And now you don’t:

People can be lazy. The feature could have been removed, and someone just airbrushed out rather than go through the trouble of taking another photo. Someone may not have double-checked all the diagrams to include the latest revisions.

The manual does say the following:

It also says this after a description of the FSB settings (which only go up to 110Mhz):

Now that may just mean they’ll have more FSB settings down the road, but then why not just say FSB settings?

We have two possibilities here:

If it’s the first, then the Asus board instantly becomes much less desirable to overclockers (and somebody’s favorite motherboard company just gave him the shaft.) The real villain, of course, wouldn’t be Asus but rather AMD. If that’s the case, then we’re all in the same position.

Normally, one would not even conceive of the second possibility. But this is Asus, which not only makes this possible, but likely. This is a company that pretended for a long time that it wasn’t manufacturing and selling a whole motherboard (the K7M). After that, what’s a dip-switch?

Nonetheless, until this gets straightened out, buying the A7V in advance might not be a good idea. You may not get what you expected.

We asked people what they thought of Via, and they answered, “Not much.” – Ed

With the release of the Broadwell-E CPUs, like the 6950X we reviewed a few weeks ago, comes the time for motherboard partners to release their updates and pack in more features. In this article we are going to take a look at one of EVGA’s refreshes, the X99 FTW K. The K version brings with it some much needed updates in today’s motherboard landscape with Broadwell-E support out of the box and the addition of an M.2 slot and USB 3.1 Gen 2 Type-A and C like its mainstream brother, the Z170 chipset. There are also some changes on the network adapter side of things with dropping one Intel NIC to be replaced by the Killer E2400 NIC. Stick around for more details and performance comparisons later!