I used an ABIT KT7 running a Duron 800 @ 1000, 1.9 volts, Prime 95. Cooling was with an Alpha PEP66, rotated shroud, with a Delta 38 fan. To get a range of readings, I used a variable power supply to power the fan from 10 to 13 volts, recording temps with both the thermocouples and thermistor. The heatsink was never removed as voltages were varied, nor was the board shut down during the test. CPU temps were recorded with a thermocouple inserted into the base of the PEP66. Ambient temps did not change at 22.3 C. The Omega HH23 digital thermometer was used to record temps. 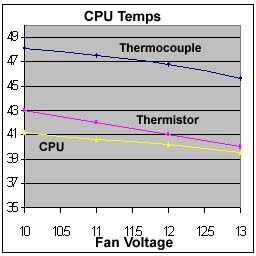 Because thermistors measure CPU Back temps, readings are influenced by the heatsink’s effect on the secondary heat path; these effects differ by heatsink. If you’re comparing different fans on the SAME heatsink, for example, the relative readings are valid. As soon as you switch heatsinks, different interaction with secondary heatpaths renders any comparison questionable at best, and at worst, invalid.

Let me also clearly state that I can’t tell you that a ThermoEngine, for example, will show the same relative pattern; every heatsink will vary in their differences between thermistor, actual and CPU temps – especially for different designs. Use the in-socket thermistor as your fire alarm – don’t expect much more than that.

Further, I can’t tell you definitively that other motherboards do the same thing, although it appears that most do.

SUMMARY: The worst thing about this board is its name; aside from that, Iwill ranks right up there with the ASUS P3V4X and SOYO 6VCA. Iwill was kind enough to send a sample of their VD133 Pro motherboard; this is