SUMMARY: This is Abit’s successor (?) to the VA6 – it is basically the same board but updated with the 133A drivers which features AGP 4x. Like many VIA motherboards, the ABIT’s memory performance suffers in comparison to BX boards. All told not a bad board, but not great either.

Interestingly, when you pop a CuMine in, the voltage settings range from 1.3 to 1.8 – no higher. Other CPUs will range form 1.3 to 2.3. I guess ABIT does not want to be responsible for making it too easy to fry your CuMine.

I was disappointed in its inability to read thermal diode temps. I look on that as one of the most desirable features – this board instead has two thermal headers. As the pic below shows, the system header sticks up rather nicely on the board. It would be very easy to cut it off, add wires and use it monitor your AGP chip. Unfortunately Abit does not include a thermistor cable for the CPU header – easy enough to make up but still nice if it was included. 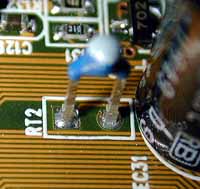 The clearance for a fan is decent – shown below is the Global Win FKP32. It is a chunky looking unit similar in size to the Alpha PFH’s, measuring 2 ½” (60mm) tall. This is about ¼” shorter than the Alpha PFHs, but at least the Abit has enough real estate so you can use all three DIMM slots. The Alpha PEP66 fits fine. This board has three fan headers, two close to the CPU slot and one at the board’s bottom. 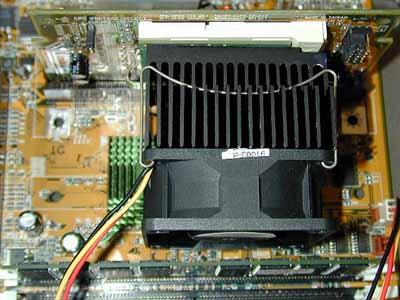 A word about Soft Menu II – terrific! Very easy to use, nice HELP menus – just a joy to use. Other notable features:

Considering that the SiSoft benches were about the same as for my Soyo +IV, I concentrated on the memory results. I tried out the various settings this board has to offer for RAM. The ABIT has a wealth of RAM settings to optimize RAM performance; BIOS settings include CAS, Memory bus equal to CPU bus or +/- 33 MHz, and a range of DRAM Timing settings including 10ns, 8ns, normal, medium, fast and turbo turbo (which can be set for each DIMM slot).

I did not find any difference between Fast and Turbo in my setup. I ran a slew of benchmarks with SiSoft concentrating on the difference between the ABIT and SOYO in terms of the Memory Benchmark (the CPU and MultiMedia marks were essentially the same at comparable settings.

I loaded each machine using 128 MB of Infineon PC 133 chips (Hyundai manufacture) with the CuMine 600E @ 600 MHz, running a series of benches at various settings to see the impact and comparison to the BX chipset SOYO +IV; results are listed in the table below:

The SOYO outperforms the ABIT at its best setting but not by much – interestingly at CAS 3 the ABIT outperforms the SOYO. However, the ABIT has to run the RAM at 133 MHz while the SOYO runs at 100 MHz. Head to head at 100 MHz CAS2, the SOYO does best the ABIT at 100 MHz by a fair margin – 296/274 vs 216/221. My take on this – ABIT is still in the early stages of optimizing VIA drivers, so it is possible that later BIOS versions will narrow the gap (one hopes these issues are not “hardware bound”).

I have been running Prime95 for over five hours so far with the CuMine 600E @ 800 MHz, Turbo RAM settings. I have not had a problem. The chip is almost cool to the touch and just chugs away. The BIOS identifies the 600E as a PIII 800EB. I tried setting the FSB to 140 MHz but this chip does not like it yet – same with the Soyo.

The ABIT VT6X4 is not quite comparable to a solid BX board relative to memory bandwidth but it’s not too shabby either. I reviewed the Gigabyte Gigabyte GA-6VX-4X
(HERE) and found it to be equal to my Soyo+IV in performance although seriously lacking in the features near and dear to us (incredibly stupid design). It is possible to design a VIA 133A board that is the equal of a BX board – perhaps the ABIT will be truly on equal footing with subsequent BIOS revisions. The VT6X4 is definitley a better choice than the VA6, so it you’re in the market for one, go for the VT6 instead.

This board currently lists for about $120; I will sell this board to the first person who will pay $99 plus shipping. How many can I use??

PS: HOW I GOT THE ABIT AND MY FIRST DAY WITH IT:

A reader emailed me about the ABIT VT6X4 – I had not heard about it and with good reason; it’s not supposed to be in distribution for at least another week. Somehow AZZO Computers has them for sale. ABIT does not even have this board up on their website yet.

Intrigued, I called up AZZO for more details and was told there are no more details except for what’s on their website, which are the bare essentials. I decided it’s worth a look and promptly bought one. This has the latest VIA chipsets, giving you AGP 4x and an AGP divider of ½ at 133 MHz and above. For all the CuMine overclockers, these settings are a big help in video problems due to overclocking the AGP bus.

I received the board Friday and promptly began to set it up. I wiped a drive and began to install W98SE using my PIII 500E with 128 MB Infineon RAM. About halfway through the install, I get a Windows Protection Error; I have never had this happen in over 100 installs to date and was surprised. I rebooted, continued and got to the desktop. I installed the shipping drivers (VIA 4.19) and found I had two different VGA drivers in Device Manager. Strange.

Then I get a whole bunch of blue screens. I get the VIA 417 drivers and try that. I get the 420 drives and try that. I change RAM, video cards (Matrox G200, G400 and an old PCI card), move the RAM around and change the power supply. Same thing. I start to mutter “Piece of crap” and reinstall Windows. Same thing. I reinstall a third time – even worse.

I call AZZO and speak to Larry, one of the techs. After a nice chat, we begin to think it could be a bum board – not uncommon. He decides to take one home and try it out; I decide to play with it some more. Last thing I change is the 500E to a C433: Everything works great – no problems! What the Hell? I try my 600E – no problems. This board does not like my 500E!

Now I am not telling you these boards do not work with 500Es – no way. My 500E is one of the first ones around and a small number did have a “boot bug” – could be this is one of them (although it works in the SOYO +IV and Gigabyte GA 6VX4X no problems). Go figure! In all the installs I’ve done before, I never had a problem with the board “rejecting” the CPU.

Got our second MSI K7T Pro2A board. It did exactly what the first K7TPro2A board did, came up with just about any multiplier other than the one you wanted. Went through the BIOS with a fine-toothed comb, updated with the