I can honestly say that I have drilled my last thermocouple hole in an HSF.

Up until tonight, I have always drilled a small (appx. 1mm) hole in my HSFs to allow me to install a thermocouple right over and touching the top of my core. This allowed me to get as close a reading of the core temperature as possible without the benefit of an internal diode.

This could possibly save your CPU in case of a bad HSF mating job, as it allows you to decide to pull the plug quickly if your temperature is way out of line.

When I get a new HSF, I first establish a temperature using the thermocouple. Then I pull it out of the hole and replace it with a modified thermistor from a Radio Shack Indoor/Outdoor Digital Thermometer.

If you have never seen one of these, the thermistor is potted inside a large plastic capsule to make it weather-tight. A painstaking effort with an X-acto knife and moto-tool cutting disk allows you to shuck away the capsule and extract the thermistor.

Even then, the small, epoxy coated thermistor is too large to fit inside the hole, so some additional painstaking work is needed to remove the epoxy coating.

What emerges is a very small SMD thermistor with tiny wires soldered to it. This will fit down inside the hole and rest upon the core top.

This device is very accurate: it comes within .1C of the thermocouple reading and it functions as my permanent core temperature monitoring system. It is a real pain in the butt to implement though.

I knew of other devices such as the Compu-Nurse and several other similar devices that were better suited for the job. Last week, I had to place an order with Crazy PC and saw that they sold an Enermax equivalent to the Compu-Nurse, so I added one to the order. It arrived today and after everyone went to bed, I got it out and examined it.

Quite a cute package, and it updates the temperature more frequently than the Radio Shack kludge.

If you have never seen one of these, you can at the Crazy PC website.

The sensor consists of an SMD type thermistor with very thin conductors running out from it to a larger zip cord. The thermistor and conductors are sandwiched between a layer of what looks like Capton tape to form a thin strip. This is obviously intended to go between the ceramic portion of the CPU and the base of the HSF.

At the base of the strip, the thin conductors are soldered to a zip cord which runs to the digital display. The two solder connections are insulated with pieces of heatshrink tubing and then both are further enclosed in a second piece of heatshrink tubing.

Out came the Micrometer and Caliper. The strip is no more than .018 inches thick, with the thickest part being the SMD thermistor. A quick check of my trusty 600 Duron showed the top of the core to be .033 inches above the ceramic carrier. So, in theory, the sensor strip should slip in between the ceramic and HSF base with .015 inches to spare and butt up against the edge of the core.

I have read several posts from people who almost or totally succeeded in toasting their core trying to implement this sensor.

When I laid the strip on top of the Duron and tried to slide it up against the core, the reason why was obvious. The strip is not long enough to keep the connection to the zip cord off the ceramic portion of the CPU and still reach the edge of the core. The increased diameter where the heatshrink tubing is installed is so thick that if the base of the HSF rests upon it, it will not contact the top of the core. 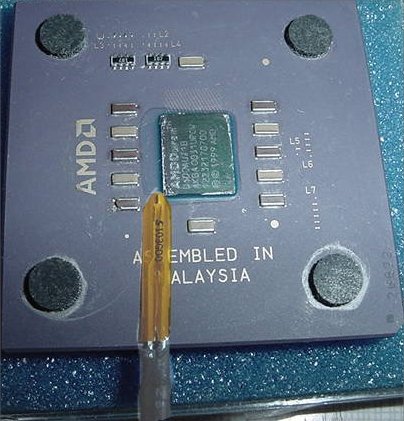 (I had a picture of the sensor assembly before cutting it back, but somehow managed to lose it during editing and after I had erased it from the camera. An irreversible “bush league” mistake.)

If you compare this picture to the one at the Crazy PC Web site, you will also notice that the tip of the strip is modified. Originally, the Capton tape extended past the thermistor about .015 inches and that prevented the thermistor from directly contacting the core it is butted up against. A little trimming with a sharp pair of small diagonal cutters easily exposes the thermistor.

Notice that in cutting back the heatshrink, the two thin conductors are exposed for a small distance. This does not pose any risk of shorting them together, since the assembly is fairly stiff and the ceramic is non-conducting.

If it helps, remove your HSF before you try the insertion, to get a mental picture of what you’re trying to do. Then reinstall it and slip in the strip.

Once you are done, a small, strategically placed dollop of hot glue will immobilize the zip cord and keep the thermistor securely butted up against the core edge. I got the Thermocouple back in the hole above the core and found that the temperature readings were identical. I then ran the CPU temperature up using Prime95 Torture and the two temperatures tracked perfectly. Ditto on coming back down.

If you change HSFs, or have to remove and reinstall your current one, make sure the strip doesn’t shift to the point where it interferes with the mating to the core surface. If you really want to make this a safe and permanent installation, you can Super Glue the strip to the top of the ceramic surface. I do stress the term permanent, as you will probably not be able to remove the sensor strip afterwards without damaging it.

My Radio Shack Digital Thermometer is now performing other duties. I’m not sure how long the button cell will last in the Enermax Digital thermometer, since I just got it. You can always leech power off the +5V from the PSU with a dropping resistor to run the display if you choose.

Do consider making one of these Digital Thermometers a standard part of your setup. The display is encased in a frame that can be snapped into a cutout made in one of the 5-1/4 inch drive bay plastic panels on the case front.

If you have any questions, please post them in the Cooling section of the Overclockers.com forum rather
emailing me, so that others might benefit. I will be glad to answer any questions and offer suggestions.

No question the computing scene is dramatically different from what it was in the not too distant past. The shifts we have all seen – eg, more laptops, small form factor, main-stream overclocking, etc – may have changed your priorities.

Consumer notebook shipments during the second quarter outpace desktops by 3 to 1.

Over the past few years, Intel occasionally has had a speed grade or two that have been represented by two quite different processors. For instance, right now, there is a 2.0GHz PIV processor, which is made using a 0.l8 micron