SUMMARY: Another idea for cooling the power mosfets 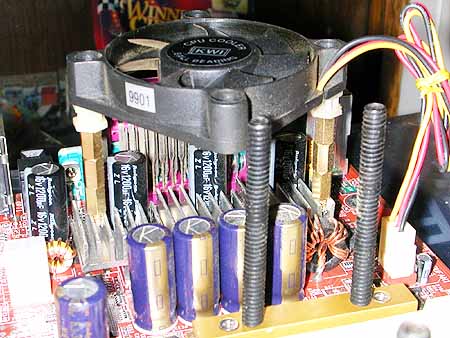 Last October (10/13/03), I wrote an article outlining some thoughts on cooling several of the chips on the Abit NF7-S motherboard. Included in this, on Page 4 of the article, was an idea on
passive cooling
for the power mosfets.

Two years ago today (as I write this), I wrote an article on
actively cooling
the backside of a GeForce 2 videocard, using motherboard standoffs and a 50mm fan.

I’ve finally combined these two ideas into one, and here’s what it looks like.

NOTE: This MAY interfere with some oversized CPU heatsinks (at least on the NF7-S), so keep this in mind as you think about
trying this.

The reason you want the brass standoffs to have the coarse thread inside and out is so they will thread into each other. You’ll need six of them, three per side of the fan, to raise it high enough
to clear the capacitors right next to the mosfets.

The threads on the standoffs are a little wider than the slots in the heatsink I used, which means you’ll have to do one of the following;

Obviously, if you have the heasink already attached to the motherboard, the last one is out. I used both of the first two installation methods on mine, and both work. Tapping threads between the
fins is the most secure, however.

Start out by laying the 50mm fan on top of the heatsink, to determine exactly where the standoffs need to be placed. Mark the sink, and set the fan aside. Next, using one of the methods outlined
above, install one of the brass standoffs into each marked location.

Next, thread two brass standoffs into each, followed by a plastic standoff into each. 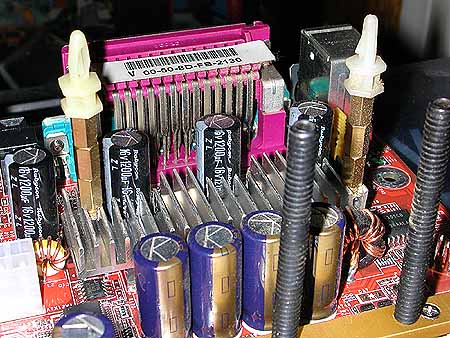 The fan installed as shown here overhangs that bank of four (blue) capacitors between the mosfets and CPU socket (refer to the picture at the top of this page). If the CPU heatsink/fan you use also overhangs
them (notably some Thermalright products, but others as well), this might not be something you can use.

A couple other views, of the amount of overhang; 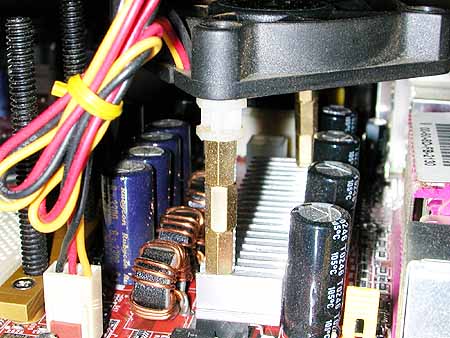 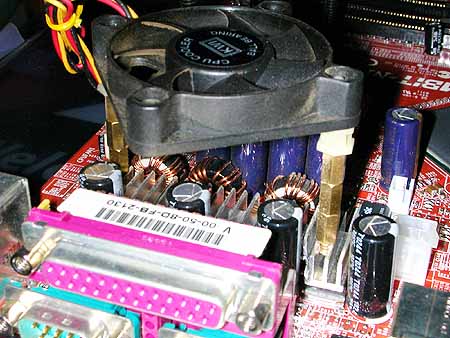 Those who read the articles posted here regularly (or someone who uses one of these) will recognize the apparatus mounted next to the CPU socket as one of the anchors from the
Aqua Joe waterblock
I had the opportunity to look at last year.

I’ve since found a solution to the problem I mentioned in that article, which was to simply remove the small plastic tab on the side of the CPU socket that
the lever locks into place on. Once the CPU is in place, and the waterblock is installed, the CPU certainly won’t fall out of the socket. This allows the lever to move freely, enabling CPU swaps without
removing the anchor. You just have to keep a close eye on the CPU while installing or removing the block.

When air cooling, usually there’s some air movement in this area of the motherboard, but when watercooling, this can become somewhat of a “dead spot”.

A nice bonus to this is mounting a fan on this not only will help cool the heatsink mounted on the mosfets, but the capacitors and other items in the area. There’s also less of a chance that there
will be interference between the 50mm fan and a waterblock, as a waterblock would normally sit lower than the fan does.

As you can see in the picture at the top of this page, there’s also a fan header literally right next to the mosfets, so any 50mm fan with a 3 pin lead, regardless of how long the wires are will work.
I had to actually shorten mine up with a twist-tie to keep things neat.