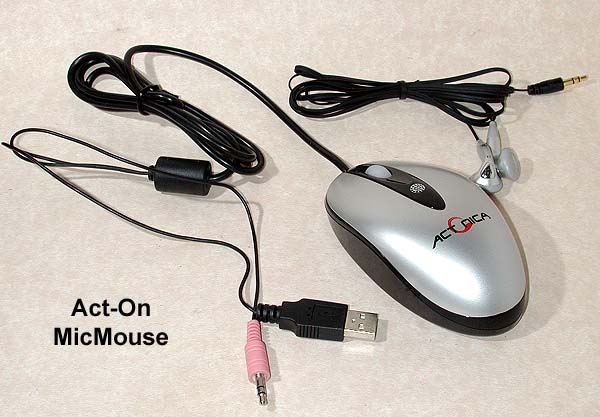 Included in the blister pack is a pair of earphones.

The good guys at Act-On were nice enough to send me a sample of their Optical MicMouse to try out. I know sometimes we might talk to our PCs, but this is the first time where talking to your mouse could actually be considered normal – this mouse has a microphone embedded into it for VoIP or other sound recording use.

The mouse itself is quite attractive: 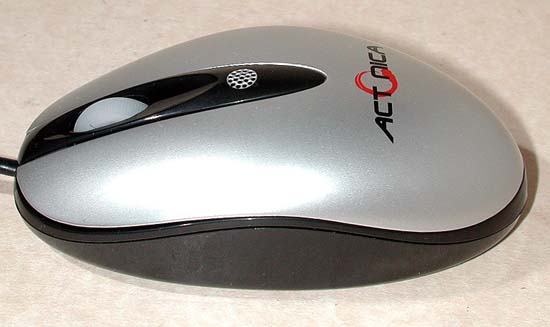 The scroll wheel is lit (red) when powered.

Note that the left and right buttons are not separate from the top shell – they are as light to the touch as any other mouse I have used. The microphone 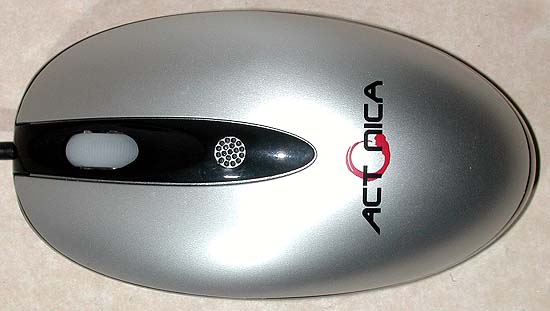 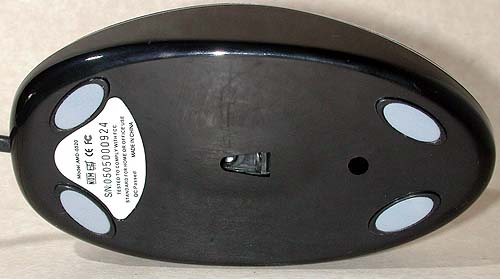 features four pads plus the optical sensor array in the center. Overall, a very nice package.

As a mouse, the MicMouse functioned very well – light to the touch and responsive. There is no utility packaged with the mouse, so mouse settings are those built into Windows. I tried a number of white surfaces to see how it would track, and one that did stymie the MicMouse was a white mat behind a clear glass on a framed picture – this did not stymie my cordless Logitech, although I can’t say it tracked all that well on it. On plain white paper, the MicMouse had no problems.

In use, I think you’d have to go out of your way to find a surface that would not track well.

I found the microphone quite sensitive – I could get good voice sound recording with the mouse about two feet away; I recorded background noise as well, in this case music playing softly about ten feet away.

However, when recording, if you use the mouse when using it as a microphone, you will pick up noise just from moving the mouse around. In addition, if you click the buttons, you will hear a loud “click” sound in the recording. I thought the microphone would be muffled when I used the scroll wheel, but I found that even covering the microphone with my finger did not substantially lessen its effectiveness.

As an integrated product, the MicMouse performed quite well in both the mouse and microphone mode. However, do not expect the two functions to perform seamlessly together – you will pick up “mouse sounds” if you use the microphone and mouse at the same time – the button click will be quite distinct and moving the mouse will sound like a slight background distortion.

Overall, if you’re looking to save some space on the desktop, the MicMouse can serve two distinct functions well, and perform two functions simultaneously with the limitations noted – not bad for an MSRP of $22.

Thanks again to Act-On for sending this our way.

No way we can duck this story. 🙂 Once upon a time, some people from the Shanghai Supercomputer Center wanted to upgrade their computer so that it would be faster than some Indian supercomputer running a few thousand Intel chips.

Freedom Of Speech: Not A Law, A Lifestyle

Today is Independence Day in the United States. The events that Independence Day commemorates are among the most known and least understood of modern times. Let’s take as an example one of the notions that came about as the result

When AMD finally gets around to making 45nm CPUs, there will be two kinds, those with L3 cache, and those without. The cacheless ones go under the code name “Propus.” We now hear, unofficially, that L3 cache doesn’t matter too