Today we’re reviewing one of ADATA’s new 1 TB blazing fast portable drives. We’ve seen 1 TB portable storage solutions and high-capacity USB flash drives before, but when it comes to raw transfer speeds they often leave us wanting more. The ADATA SE760 solves this problem by delivering NVMe performance with a USB Type-C interface. With a sequential read speed of 1,000 MB/s and compatibility on Windows, Mac OS, Android, Xbox One, and PS4 consoles, this new breed of portable storage strikes a balance between portability and raw transfer speed.

With the use of the PCIe 3.0 x2 host interface, ADATA is able to implement NVMe technology to achieve impressive transfer speeds for portable devices. The durability and merits of solid state drives are well known at this point, but for a portable drive, it just makes sense. With no moving parts, the risk of damage is low and product longevity is notably enhanced.

Giving us an NVMe drive with USB compatibility is great, but they didn’t forget about the all-important casing and exterior design. The ADATA SE760 comes in a very stylish brushed aluminum case with two injection-molded plastic end-caps to seal it up. While this is not a ruggedized product like the ADATA SE800, it does appear to be quite sturdy and durable.

To get the most out of this drive, you’ll want to connect it to a USB 3.0 or better port. Not all USB 3 ports are equal, however, but where this drive is concerned, USB 3.0, USB 3.1 Gen 2, and USB 3.2 Gen 2 all feature the same exact performance capabilities.

While the SE760 is compatible with older USB 2.0 protocols, it requires two USB ports for sufficient power delivery. In this situation, a USB Y-cable will be needed.

With three different capacities and two different color options, there’s sure to be something that fits your needs.

The ADATA SE760 arrives safely in a full-color box. On the front, we have a high-resolution picture of the drive with the capacity specified in the bottom right corner. The back of the box is rather busy with specific drive information listed in multiple languages. This approach is a little off-putting and difficult to read. Perhaps it would have been more effective to reduce the number of languages and streamlined the product information. Regardless, this is a trivial detail and doesn’t detract from the drive in any way.

After unboxing the drive, we got a realistic look at the scale and overall size of the product. Capacities of 1 TB can come in incredibly small packages, as small as a typical flash drive in some cases. However, by sacrificing compact form factors, ADATA was able to deliver the impressive speed we talked about above. 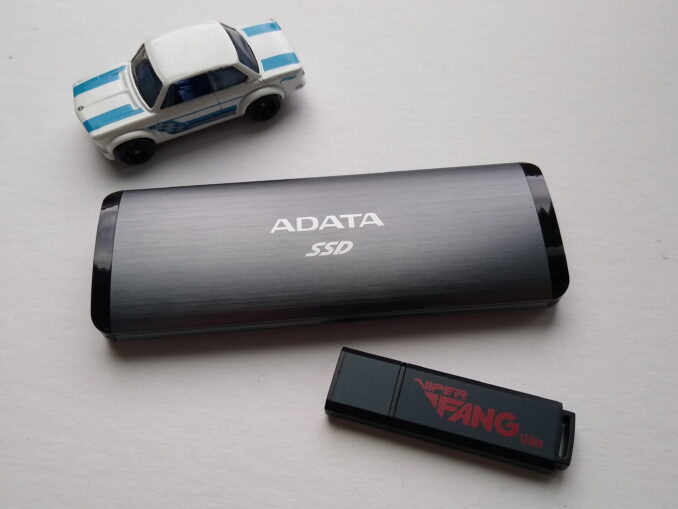 Our drive is the titanium gray color, and overall it has an understated, elegant look. The brushed and anodized aluminum shell has a matte finish. It has a solid feel in your hand without being heavy. At just 95 grams it’s quite light but it still feels substantial and sturdy.

On one end of the drive, we have a blank plastic end cap. On the other end is the USB Type-C connector and a blue LED indicator light. When the drive is plugged in, the blue LED is illuminated.

The ADATA SE760 works out of the box like any other removable media. Your computer will recognize and initialize the drive as removable mass storage so you can easily interface with it. However, if you are looking to take your experience to the next level, ADATA’s HDDtoGO software suite adds extra features that could be quite useful.

Simply put, you can carry your entire OS in your pocket. This nifty tool allows you to install the entire OS on the SE760, and then boot to it once you plug into a computer’s USB port. One could conceivably set up dummy computer terminals at home and work, with no hard drive, then use this removable drive as the primary boot drive for both.

This technology has been around for a while, but it has not been practical due to removable storage transfer speeds…until now. One major downside is that the software is not compatible with Windows 10.

We know it’s fast on paper, but how does it actually perform in real-world tests? To answer that we’re going to put the drive through the gamut of benchmarking programs to evaluate the drive’s performance. The drive will be formatted to NTFS with default settings under Windows 10.

Any of the USB ports on the ASRock X570 Taichi will produce the same benchmark results. However, we will use the USB 3.2 Gen 2 port, which is located directly underneath the USB-C port. 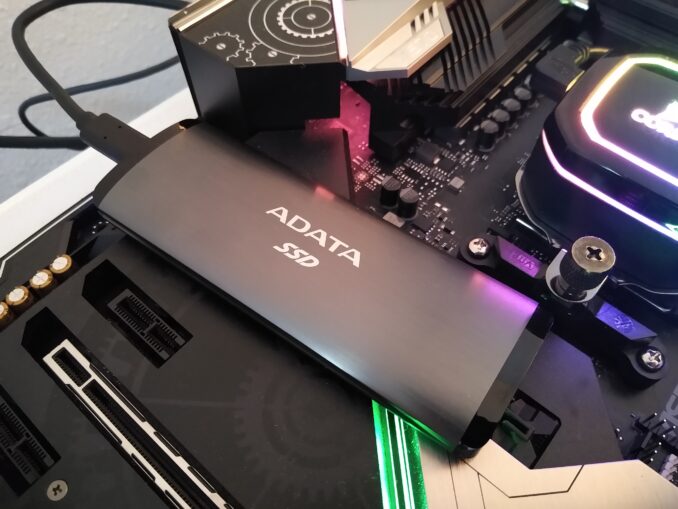 In all of our tests, there was no thermal throttling observed, even running the benchmarks back-to-back to simulate a worst-case scenario. All benchmark results and stress testing was done in an open-air test bench with no fans or direct airflow.

With a K-Type thermal probe taped directly on the portable drive, we measured a maximum temperature of 6°C above ambient temperature throughout the entire testing process.

As you might recall, the SE760 is rated for a sequential read speed of 1,000 MB/s. We are happy to report that the real-world test results show that our drive easily matched and surpassed the manufacturer’s rated speed. The drive proved to be quite fast compared to our other test drives in the lineup.

When it came down to the random read performance, our drive performed admirably. While the random write tests are right where we expected them to be, the sequential write performance surpassed our expectations and indeed beat all the other drives in our comparison.

Based on the Crystal Disk Mark benchmark tests, this drive is quite fast and a top performer. While we didn’t achieve the rated sequential read speed in AS SSD, our result is easily within expectations.

At this point, we know that the drive is blazing fast and a top competitor compared to the others we tested. Similar to what we saw in the CDM tests, write performance on this drive is particularly high. This is due, at least in part, to the large 1 TB capacity. Please note: that both read and write times are affected by capacity, therefore, drives of larger capacities have a marginal speed advantage over smaller capacities.

Being a portable drive, real-world file transfer time on the ADATA SE760 is the most critical aspect to its performance.

Here we can see that a 60 GB file took approximately 11 minutes to transfer from C to D. Please note that the C drive is approximately 3 times faster than the ADATA SE760 and does not hinder transfer performance.

Lastly, we will take a quick look at the drive’s performance in Anvil’s Storage Utility. The tool can monitor and test read and write speeds on hard drives, and also produces an output performance score for comparison. It’s a great utility that also provides further information such as partition and volume information.

We’ve come to respect ADATA for delivering quality products, so it didn’t come as much of a surprise that the SE760 exceeded our expectations for a portable SSD. With impressive benchmark numbers and a sexy-sleek brushed aluminum exterior, the SE760 checks all the boxes for a top-tier portable hard drive. It’s bigger and heavier than some individuals might expect, but as we mentioned before the tradeoff is compatibility and speed.

Through the ingenious use of the PCIe to USB bridge, ADATA has delivered a portable drive which is about two times faster than a modern SATA SSD. Our tests showed that this drive scores an impressive 1024 MB/s to 950 MB/s sequential read speed depending on the benchmark. This means that upgrading your computer’s hard drive can be as easy as plugging it into an available (and supported) USB port. Since the mass proliferation of USB drives, enthusiasts have filled forums with pipe dreams of actually installing an OS on a USB drive for a truly portably desktop experience. Utilizing the developments in USB technology, ADATA gives you the hardware and software to actually accomplish this feat.

While we don’t have retail pricing information at the moment, we found comparable drives on Amazon and Newegg selling in the $150-$200 price range. The rugged ADATA SE800 is slightly different, but touts similar performance numbers and sells for $149.99 on Amazon. We’d expect the SE760 to be similarly priced and competitive in the portable drive market. With exceptional speed and a very attractive exterior, we have no problem recommending it for purchase and giving it our seal of approval.

Today we bring you a new SSD on the market from Galax, you know, formerly Galaxy, the maker of the infamous high end NVIDIA H.O.F. cards we all love so much?! Galax has teamed up with JMicron to bring you an SSD made for gaming primarily. While this data isn’t particularly special in how it needs to be handled, what we don’t need on a drive like this is blazing write speeds as once things get installed, its usually there. And even the slowest of the SSDs are still way faster than a HDD by leaps and bounds. Let’s see what the Galax Gamer 120GB SSD has to offer us, shall we?

I've always been a fan of AData drives - they may not be the crème de la crème, the true "top tier" in terms of flat performance when looking at just benchmarks, but they're still great performing in the real world. And with that "summit tier" you're definitely paying for it.

AData seems to be in the Goldilocks zone. Quicker than the bottom of the barrel drives (and in my experience more reliable, never had an AData mSD card, USB drive or SSD drive fail while other drives have) but you're not hunting down mob loan sharks to get a decent amount of storage, either.

Very astute observation, and I think "Goldilocks zone" term definitely applies. ADATA has a few new NVMe drives that are quite fast and highly competitive when looking at price/GB. :)