ADATA is joining the ranks with their first RGB LED memory line, the XPG Spectrix D40. ADATA has sent us a 2×8 GB kit of 3000 MHz DDR4 from this line for testing. My first impression was this kit looks very similar to their XPG Dazzle which we reviewed a while back since it sports the same red and black heatsinks but as you’ll see it does have some major differences.

The ADATA XPG Spectrix D40 DDR4 series is manufactured in China and the memory carries a lifetime warranty. Looking at the speed and timings of this set of RAM, I initially expected to find Hynix ICs under the heatsinks but according to software and testing, that’s not the case as we’ll see further into the review.

The specifications and features below come directly from the ADATA website.

Below you can read more detailed specifications of the ADATA XPG Spectrix D40 memory kit in the AIDA64 and Thaiphoon Burner screenshots. Thaiphoon Burner software is great for analyzing details about RAM such as XMP, JEDEC profiles as well as manufacturing information. Additionally, memory profiles can be created or edited in this software. We can see this kit is built with Samsung ICs, but it’s not clear which revision according to Thaiphoon Burner which is indicated by the “?” in the part number (# K4A8G085W?-BCTD). This ram is single-sided with eight 1 GB ICs per module. Aside from Samsung’s “B” die there aren’t many options left in this class. There’s the newest Samsung “D”, with speeds of 3600 MHz and Samsung “C” with speeds up to 3200 MHZ. The latter hasn’t really been seen much in aftermarket RAM kits but it seems to fit this kit’s description. The only way to be sure is to remove a heat spreader and look.

As you can see in the photo below, this is indeed Samsung “B” die with a part number of K4A8G085WB-BCRC. This a variant I haven’t seen or worked with in the past. The timings and speed aren’t the same as the fast “B” die, for lack of a better term, as well as the last four digits of the part code are slightly different as the “fast” RAM IC is labeled # K4A8G085WB-BCPB these are found in high-speed DDR4 RAM kits.

The Spectrix D40 line is the first customizable RGB LED memory kit from ADATA which has been fully tested for compatibility with the popular ASUS AURA Sync software. AURA Sync enables end-users to customize their systems in a multitude of colors and effects. The D40 line is available in speeds up to DDR4 4000 with a base frequency of DDR4 2666 and a wide range of system compatibility from Intel X299 to AMD’s AM4 platform. Like all ADATA memory modules, the SPECTRIX D40 comes with a lifetime warranty backed by excellent service for maximum peace of mind.  Here are some of the features that ADATA highlights on their website.

The packaging of the XPG Spectrix D40 is simple and effective. It is a cardboard shell that sports a flip-up top. Lifting the lid, we can see one of the Spectrix D40 RAM sticks through a window and a few features listed on the inside of the top flap. There is no hole to hang the memory on a rack in a brick and mortar store, though. The front has a few high-level specifications about the kit along with Intel XMP 2.0 and AURA SYNC compatibility logos. After cutting the tamper-proof seal on one end of the cardboard packaging we’re able to slide out the blister pack which keeps the RAM sticks securely in their place during transportation.

As seen below, the modules are sporting red and black heat spreaders with a two-tone plastic upper section. This clear area allows the LED RGB to shine through but adding some black accents to it as well as the XPG logo along the top in red. The Spectrix D40 also has a ten layer black PCB that you can see along the lower edge of the sticks.

Below is a picture showing the label on the RAM. It shows the part number, speed, voltage, and primary timings.

ADATA has RGB control software for the Spectrix D40 available for download from their support site. It’s very straightforward with numerous effects that you can employ. Another cool feature of the Spectrix RGB is the ability to control five sections on each stick individually. If you look at the picture you’ll see it has labels for DRAM1_1 through DRAM1_5 these are the sections of one stick which you can set a different color for and DRAM2 controls the sections of the second module. Below that section is a red button which syncs all the sections of the module together again.

The Spectrix D40 is also compatible with the ASUS AURA Sync software which allows you to sync all the parts of your system together with the RAM including the motherboard and the graphics card. In the slideshow below there are multiple shots of different colors and combinations while the system is “synced” using the ASUS software.

Below is a screenshot from AIDA64 stability test after three hours of full load:

Since the memory is now proven stable through AIDA let’s look at the performance testing and comparisons.

The first synthetic benchmark is AIDA64, specifically the Memory Benchmark. Here we see the two kits with the tighter timings have a slight advantage through the AIDA64 Memory tests but only by a few percentage points at the outside. 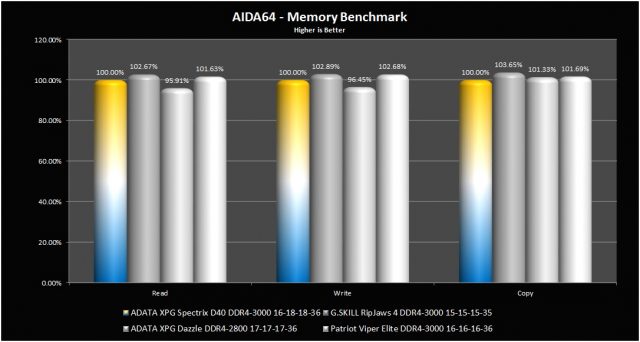 Up next in the synthetic benchmark suite is MaxxMem2. The Spectrix had a lead in the Read section of the test and held it’s own through the copy test as well but the Write test it just seemed to fall over. This isn’t something I observed in AIDA64 but specifically here in MaxxMem2. I ran the benchmark multiple times and even when this ram was overclocked it scored quite low in the MaxxMem2 Write test. This benchmark is getting old and has very little support these days so it could be caused by some incompatibility with Windows 10, the Z270 chipset or this kit’s timings just don’t jive with MaxxMem2. 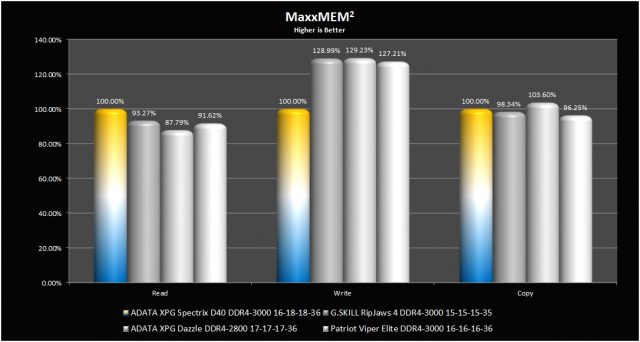 For the final synthetic benchmark, we’ll look at HyperPi 32M. All the RAM kits scored quite evenly across the board here. HyperPi is very sensitive to timings, which suggests to me that the ADATA XPG Dazzle must have some tight sub-timings to come out on top considering it has the lowest speed of all the samples. 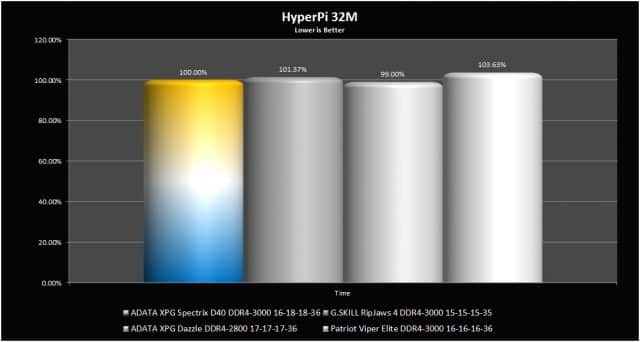 I’ll finish up the benchmarks with Cinebench R15 which is a CPU rendering benchmark. Again the results are nearly identical across the board here with a maximum variance of just over one percent. 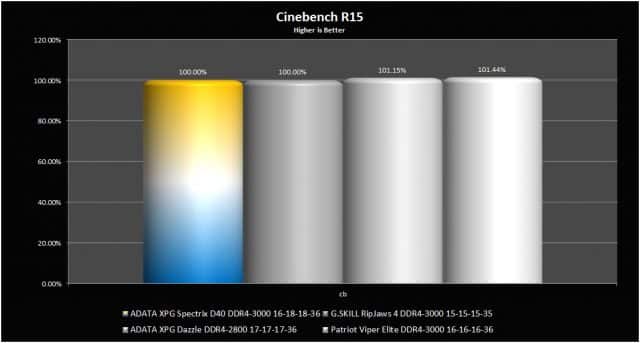 I have worked with Samsung based RAM many times in the past but this variant is a whole new animal to me. I did find it’s not overly tolerant to being overvolted if anything it just made it more unstable. Running like timings such as CL 16-16-16 proved to be difficult as well with the RAM preferring timings as shown in the chart below. Running the kit at higher speeds such as DDR4-3600 was possible and those timings were stable for over an hour with the AIDA64 stability test but the relaxed timings did impact the performance somewhat. Looking at the DDR4-3466 profile, the timings were nice and tight and the performance was there for benchmarks but full stability eluded me. After a few attempts and the AIDA64 stability test falling over at the 60-minute mark, I moved on. I do believe it could be stabilized at DDR4-3466 but a few more timings will need relaxing here as added voltage wasn’t helping. The DDR4-3333 setting I believe would be attainable by most users, it’s essentially the DDR4-3000 XMP timings with a few secondaries tightened up and a mild voltage bump to 1.38V. This one I tested for three hours using the AIDA64 stability test and it passed without a hiccup.

Below are some graphs comparing the overclocked results to the stock XMP results for the ADATA Spectrix D40 DDR4-3000 kit. I’m not going to include the DDR4-3600 results even though it improved bandwidth in the AIDA64 benchmark overall performance was lacking. Speaking of bandwidth, you can see from the graph below how the added speed translates into more throughput. 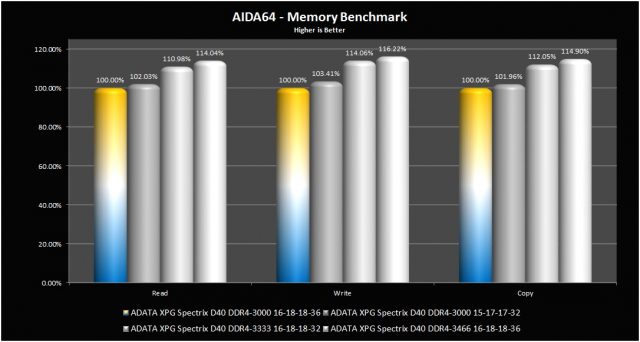 The results here for MaxxMem2 don’t appear nearly as impressive as the AIDA64 scores did. Overall, there was a general improvement aside from the copy results which went virtually unchanged. Again, as I mentioned earlier, I had below-expected Write performance in MaxxMem2 across all the overclocking results just as we saw in the XMP comparisons above. 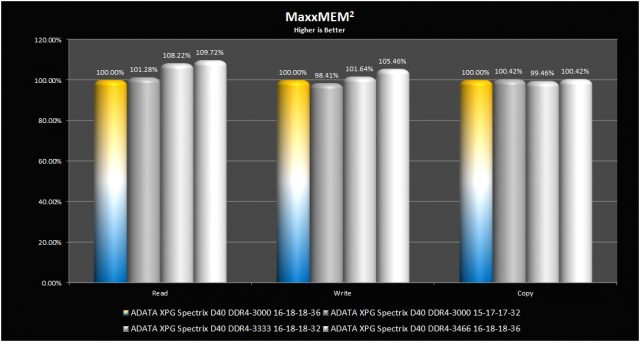 In HyperPi the Spectrix D40 showed steady improvement as the speed increased dropping the completion time from 9m 54s at stock to 9m 18s at DDR4-3466 well over 30 seconds without an increase in CPU speed. This shows just how sensitive some benchmarks are to RAM settings. 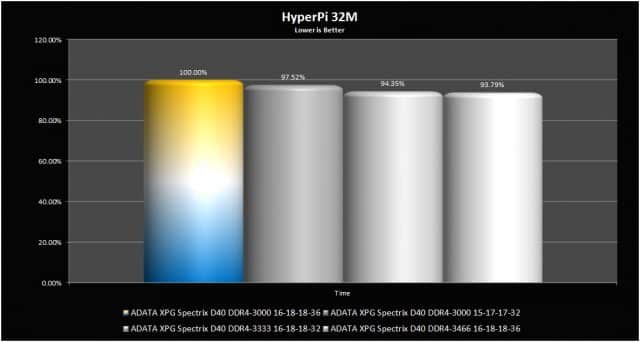 Now Cinebench R15, on the other hand, doesn’t respond to RAM changes like HyperPi does. There was only a twelve point spread between all the RAM settings in a benchmark like Cinebench R15 that was scoring over one thousand points, that’s just over one percent. This backs what has been said many times. In most real-world scenarios the RAM has very little impact on overall performance. 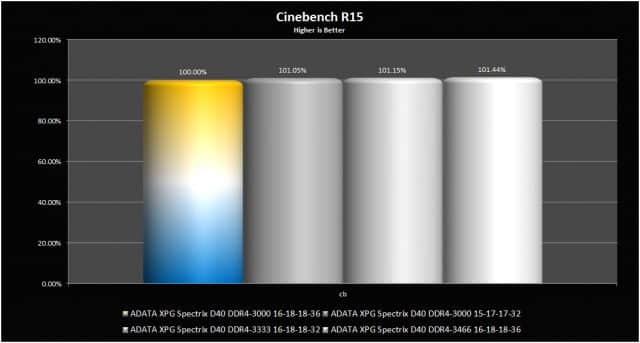 I’m adding a few screenshots of more “real-world” type benchmarks in a table below which you can enlarge if you’re interested in seeing the results. Overall though there were very minimal gains if any.

Overall the ADATA Spectrix D40 DDR4-3000 held up well compared to other DRAM kits in its class despite the fact it has some of the loosest timings. Overclocking went well pushing it up from DDR4-3000 to DDR4-3333 with better than stock timings and only slightly over stock voltage which is impressive and it showed some decent gains in ram intensive tasks as well as bandwidth. Unlike other Samsung ICs, it quickly ran out of gas as the frequency was raised but it doesn’t carry the same 25% premium that those DRAM kits would.

Using ADATA’s RGB software in conjunction with the AURA software gives you nearly endless possibilities for lighting and effects and is surely enough to satisfy any RGB LED fan. Even when the lights are on, the red and black heatsinks give the Spectrix a very distinctive look.

As for pricing, the Spectrix is sitting right where it should be. At $199.99, it’s offering value, performance and good looks. Add to that a lifetime warranty makes this a very attractive option for any system builder who wants that extra bit of flash. Overclockers Approved!

AMD to Release Their Own Memory

AMD today announced that they will be releasing a line of AMD-branded memory. From partners Patriot Memory and VisionTek will come AMD memory ranging from DDR3-1333 to (eventually) DDR3-2133.