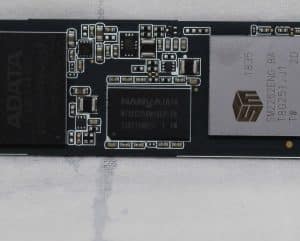 Gigabyte has just announced the release of its new AORUS Gen4 7000s Prem M.2 2TB SSD with sequential read speeds of up to 7 GB/s and write speed up to 6.85GB/s. This is made possible due to its large dual heat pipe cooler and a Phison eight-channel 4th Gen E18 controller. Naturally, to reach these speeds you will need one of AMD’s X570/B550 or Intel’s  Z590 / B560 / Z490 / H470 motherboards (with a Rocket Lake-based CPU). Pricing is not available at this time. Here is Gigabytes’ official press release.

We’re in the home stretch of our CES 2016 coverage, check out what our friends at ADATA had to show us.

Up next in our review carousel is another very fast M.2 PCIe NVMe based SSD. With only Toshiba/OCZ and Samsung generally competing in this enthusiast space, it will be nice to see some more competition. To that end, our friends at Patriot have kindly sent over their 480GB Hellfire M.2 SSD. The Hellfire promises to be pretty quick using its Phison PS5007-E7 controller shared by others in the market. Let’s dig in a bit and see what makes the Hellfire tick, and see how it performs in our testing.

Another boost in the ever changing SSD landscape. Nice review Joe.

interestingly though prices have skyrocketed since i bought it at the end of 2018...

Fantastic drive, most probably better than the HP EX950!

im actually waiting to receive the 512gb version as i type this. picked it up for [email protected] amazon yesterday so the price should be the same. i actually missed it for $84 a couple of days before i bought mine. the 1tb is currently $192. i bought the sx8200 512 to replace my 960 evo 500 so i can keep it in the rig it was built in. the performance is incredible and the price is just as crazy. i couldnt pass it up being that samsung m.2s in the same class are ridiculously expensive in comparison! im hoping to catch the 1tb on sale at some point so i can go with a single m.2 without needing a hdd for storage.

It would be nice to have 2 of the 1tb's on every pc. Four is probably better though:D