During my time in the Overclockers.com forum, I have been asked many times about the air cooled Peltier setup I use with my Athlon XP 1800+.

As this is at the least an interesting option for some people who wish better cooling than just straight air, I finally stopped being lazy and decided to write this up so it would available at a central location.

TECs (aka thermoelectric coolers, Peltier effect modules or Peltiers) are used by hardcore cooling enthusiasts to drop their CPUs below ambient temperature. This leads to extreme overclocks, otherwise only possible with a phase-change refrigeration system like a vapochill.

It takes quite a bit of electricity to do this trick. TECs draw usually at least 8 amps but sometimes up to 20 amps of power from a 12 volt source. All that electricity ends up turning into heat, too, which is why the hot end gets so hot.

You must always have a Peltier unit that is rated at least as high as the amount of heat the CPU is putting out. Let’s say your CPU is generating 60 watts of heat. You must have at least a 60 watt Peltier just to get rid of the heat the CPU makes and keep it at to ambient temperatures.

You want a colder CPU than that, you need even more power for the Peltier.

Let’s say you use a 100-watt Peltier. Your cooling system has to get rid of 60 + 100 = 160 watts of heat. It is much easier to get rid of that much heat using water than air, and people who are willing and able to deal with Peltiers aren’t usually going to find water cooling the Peltier a further stretch.

I’m an exception, I don’t use water cooling for my Peltier. At the time I did this, I didn’t have the time or space to implement a hydrosolution.

I remembered that back in the Pentium overclocking days, Peltier modules were used with large air cooled heat sinks. Mind you, Pentiums didn’t generate that much heat, and you needed a much smaller Peltier to get the job done, but I thought the idea could still work and wanted to try it out and see if I could get the benefit of Peltier cooling without getting wet.

First, I needed to figure out how hot my CPU would get. I decided to try this with an Athlon XP 1800+ rather than my TBird 1400 simply because the first put out around 60 watts of heat, while the TBird put out 80+. I felt that gave me a fighting chance.

I decided to use an 80 watt Peltier This was large and powerful enough to handle CPU heat, but not overpower the capabilities of the heatsink. You just can’t let a peltier hot side stay hot, because if you do, the hotter the cold side will get, too.

To get the most out of my 80-watts, I also got a copper cold plate about 3/16″ thick to act as a buffer zone and heat spreader on the cold side.

Even with a relatively small Peltier, I still needed to get rid of over 140 watts of heat, so my next step was to find a heatsink that could do that. It also needed to be able to sit on top of the CPU with the Peltier and the underneath it. All this led me to decide on a very heavy-duty heatsink that would use the four bolt holes around the socket A to secure itself to the board. I needed to look no further than the Swiftech MCX462 with a 68CFM Delta fan atop it to find what I needed.

The 80-watt Peltier module I used draws about 9 amps at 12 volts. This allowed me to power it from the 12 volt line of my ATX PSU, since I had an Enermax EG651P-VE with a 12 volt line capacity rated at 24 amps.

So here’s the parts:

I had a MC462 on hand for the project so I went ahead with it while my MCX462 was being shipped. I also had a lower speed FFB0812HHE 45CFM Delta fan on order too. I wanted a quieter fan than the -SHE Delta.

The often-fatal detraction from using Peltier cooling or any other below-ambient cooling is condensation.

When the temperature of cold side drops below the dew point of the air around it, water droplets form in very bad places and you quickly end up with ex-equipment.

You prevent this by insulating the cold side and making it airtight. Essentially, you create a mini-freeze box for your CPU core.

I insulated the socket on the motherboard using the guide at OCtools.com. 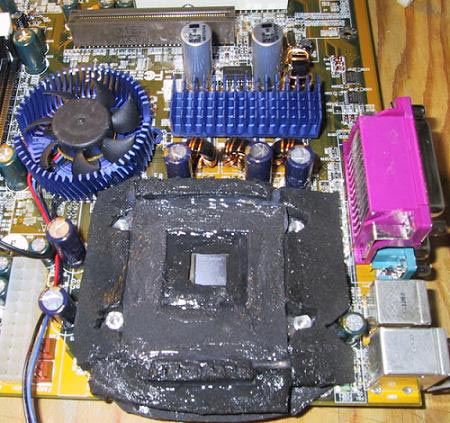 Before putting on the heat sink, I got some 2 ¼” long bolts to replace the 2″ bolts that came with it. I did this to accommodate the thickness of the cold plate and Peltier module.

I also drilled a small hole in the corner of the cold plate and the heat sink base and secured a digital doc thermistor in each hole with Arctic Silver thermal epoxy. That way I could monitor hot and cold side temps from my digidoc. I then secured the heat sink: 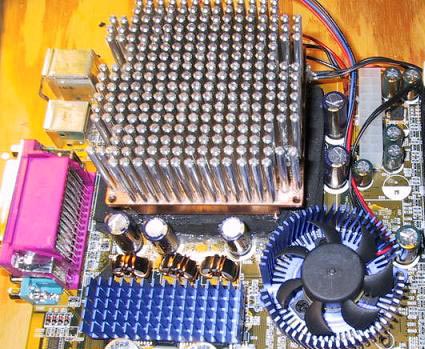 I then put the fan on. Now I had a stack of parts (that was pretty darn heavy) that looked like this in cross-section:

At idle and 1.75v core, the motherboard sensor and the digidoc cold plate sensor reported temperatures of around 10C. The air coming off the heat sink was slightly warm and the hot side digidoc sensor was about 10C above ambient.

As luck would have it, I got the MCX462 a day after I put this together. I went from the SHE Delta to the HHE version and the MCX462. The temps stayed roughly the same but with less noise.

The HHE looks just like the SHE and EHE, but is very quiet. It gives me the benefits of a focused flow fan without the noise of the SHE or EHE. While my temps fluctuate a lot, all in all I get ambient CPU temps at 1.80v core, full load at 1800MHz with not much noise and no water. Water is better, but this isn’t bad.

As the title implies, you have to think first, do later when it comes to air-cooled TECs. There’s not a lot of room for error in getting a Peltier element powerful enough to cool the CPU without generating more heat than any reasonably compact aircooled heatsink can handle. The CPU heat load can’t be too large for the TEC and the TEC can’t be too large for the heatsink.

The cost of the MCX462 and TEC is almost as much as some decent non-TEC water cooling, which would probably hit temperatures just as low in most cases and also allow more headroom for volt mods and faster overclocks.
I’m satisfied with my results, but I would say that for the effort and costs involved, the gains made do little to offset them.

In retrospect, I would opt for water cooling and a larger Peltier element were I to choose to Peltier cool at all.

For those of you who have been around a very long time, I am sad to report that we recently lost one of the originating spirits of our forums, Maddman, aka Patrick. He passed away from a pulmonary embolism at

The following describes how I got my KryoTech Renegade to cool below room temperature. The procedure is not difficult but will probably void your warranty. Remove the 12 Volt flimsy fan, cut off both sides of ventilator opening for better

The Inquirer reports on a new virus you should take very seriously. The reason why is that you don’t have to do anything dumb to get infected, like get happy fingers when you get email attachments. Rather, it comes looking