SUMMARY: Very good performance, although somewhat weighty for mounting on a single lug. 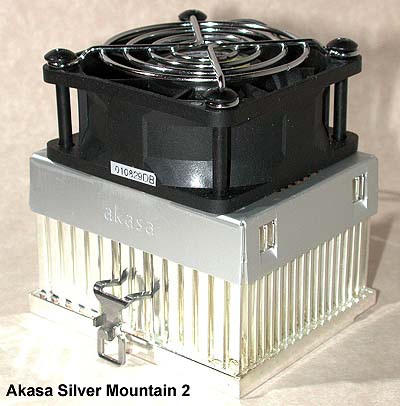 Crazy PC was nice enough to send over an AKASA Silver Mountain 2 to test out. This is a pin-fin, all copper heatsink that is silver plated. I doubt that it adds anything to cooling, but it does make for a pretty picture and marketing tag-line.

This heatsink is no light-weight; weighing in at 580 gms (about 1¼ pounds), this is a serious chunk of copper. Note that the Akasa’s clip engages one socket lug – this IS NOT a heatsink to leave on if you are transporting your PC to a LAN party. I would feel a lot better if the clip engaged all three lugs.

If you look closely at the base,

you can see small “cut marks” – it looks like the pins (252 in all) are punched into the base and these marks are as a result of this process. Performance will depend on how well the pins are mated to the base. 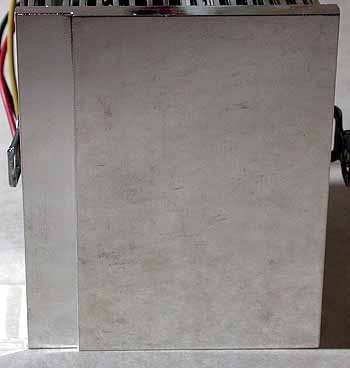 is very smooth and flat – a nice job.

The fan is mounted on a skirt which raises the blades above the pins – helps to reduce noise somewhat. The fan is YS Tech NFD126025BB-2F, rated 38 cfm @ 6800 rpm. I measured noise with a Radio Shack sound meter 8″ from the fan’s intake at 69 dBA, about the same noise as a Delta 38. This fan is rated at 7.2 watts and comes with a four pin adapter; there is an rpm wire which plugs into a fan header so you can monitor rpms.

The clip requires a screwdriver to mount. I found it easy to mount – the slot for the screwdriver is secure enough so the potential for a slip appears minimal. Although I’m getting used to these, I still don’t like them because doing this inside a cramped case is not fun.

The Akasa was first tested on the CPU Die Simulator which gives results that are unaffected by motherboard influences. I then tested it on an Iwill KK266+ and Shuttle AK31, modified to read AMD’s on-die diode, as an example of what users might see on their systems.

The Akasa Silver Mountain 2 does a very nice job, and why not? Lots of pins, lots of copper and lots of air flow (and noise) – works every time!

Thanks again to Crazy PC for sending this our way.