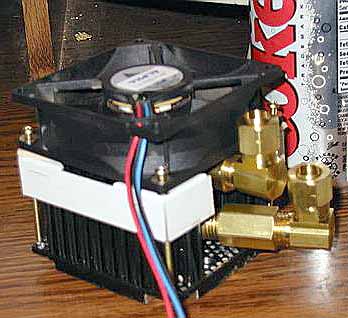 A few months ago, I started investigating water-cooling systems after seeing a very nice one in Maximum PC. This is a story of joy, woe, and a water-cooled PC-60. I started reading everything I could online, Overclockers.com being one of main resources, and started to get some ideas.

Almost all of the kits available online are mass-produced, molded plastic, unoriginal ideas, that while cooling effectively, look like an octopus inside your computer. I’m a case modder, not an OEM weenie, and an accomplished auto mechanic and metalworker besides that. I needed something different, something challenging. So I set out planning my own custom system with ideas that had never been attempted before.

I measured out space constrictions in my PC-60 and found the main HDD rack that sits behind the intake fans to be the perfect place for a radiator. There was enough room and already had fans that run constantly, reducing the overall noise produced by avoiding another fan. I ended up using the Cooling Cube radiator by Danger Den, which fits perfectly in the space. That left me with three parts left, the waterblock, tubing and pump/resivor.

The pump I decided on is an Arctic Freezer Pump/Resivor. It perfectly utilizes the two bays taken up by the serial LCD installed in the case, and besides that is very cool because it is all aluminum.

The centerpiece of the system is the waterblock. One of my main concerns about a water-cooling system is pump failure. I also didn’t exactly appreciate the idea of putting my $40 PAL8045 on the shelf. I converged the two problems, and came up with a solution, making my ‘8045 into a waterblock. 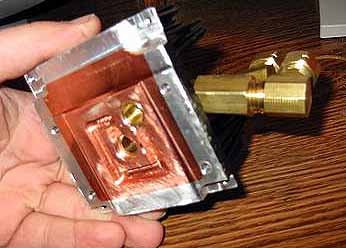 Here is the one part of the system that is truly unique: Instead of cluttering my neat case with ugly silicone tubing, I decided to use copper tubing. Not only does it look great, but also stays very neat, because it can be bent to go around parts and stays put.

I started making the waterblock with the idea that I wanted a center cold-water dump and a maze design. I used the thermal grease that stuck on the HSF as a template for the processor core and drilled two holes right through the top of the HSF – an inlet and outlet. 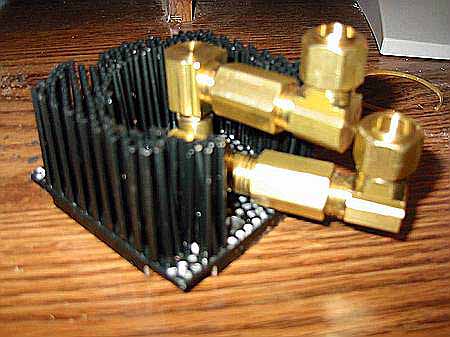 I then proceeded to draw scribe a maze onto the block and use a milling machine to machine the block. Using my dial calipers and the depth of the copper, measuring though the inlet and outlet holes as a guide, I lowered the end mill to half cutting depth and machined along the scribed lines freehand, using lots of cutting fluid.

With that finished, I measured the depth left before I hit the aluminum again, and lowered the end mill to a few thousandths of an inch above that. I machined along the path I cut earlier, and with the water passage finished, the easiest (I would find this out later) part of the job was complete.

After a hideously expensive trip to Home Depot, I arrived home with a bagful of brass fittings that would hopefully allow me to build inlet and outlet lines from the waterblock while making a right angle bend to avoid the backup fan that would sit on top of the waterblock.

This turned out to be a complete nightmare from the start.

The pieces wouldn’t fit and the only way it worked was if I removed all the fins remaining on the block. After a very late night, trying everything I could, I finally came up with something that worked.

I went out to the garage and soldered all the fittings together with an acetylene torch. Then I flipped the block over and placed the 1/8 inch copper plate that would cover the water passage. After cutting the plate to size, I fired up the torch again to solder the plate on.

After about five minutes, I realized that the heat dissipation power of the 8045 is not a force to be reckoned with, and turned up the torch to full blast. Ten minutes passed and the solder began to flow. The plate went on perfectly and solder filled all thermal gaps between the plate and waterblock.

An adapter was constructed that allowed me to test the block with my air compressor at about 100 psi of air. I hooked it up and dunked the whole thing into a big bucket of water. In about two hours, a pinhole air leak appeared where the brass fitting meets the waterblock.

About a week of nights spent soldering the same joint over and over, it left me with a hole that water can’t get through, but air can at 100 psi. After that much work, I was satisfied with this result and proceeded to put the system together.
{mospagebreak} 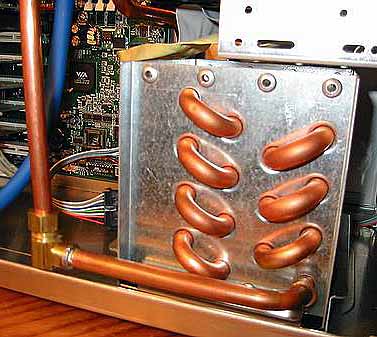 I started with installing the radiator. I needed to attach right angle bends to the copper tubing coming out of the radiator, but the tubing was slightly oversized and didn’t fit the compression fitting, so I took the compression ring out and simply soldered the fitting directly to the tubing.

Luckily, the radiator mounted on the same bracket that held the removed HDD cage in. A few pop-rivets later, I had the radiator installed. Next was the pump. 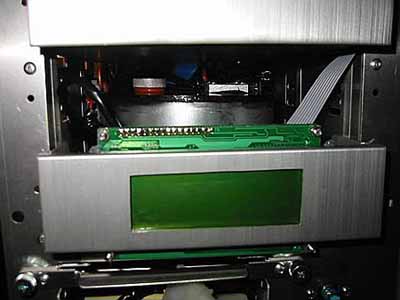 The pump proved to be more of a pain. It is located inside the 5 and something inch bays behind my serial LCD, in which I cannot get a drill inside to make rivet holes. The pump also had to be modified for this application.

I made up some custom fittings and screwed them in instead of the barbs that came with the pump, which had some hard black goo sticking them in, making the job only possible with a deep, six-point socket and ratchet wrench. Any other tool and the fitting would strip away, making it vary hard to remove.

Back to the problem of mounting the thing: I couldn’t use rivets, because there was no room to make a hole. I decided to solder the pump in with some special aluminum solder I picked up at an auto repair show. It worked like a charm and now the pump is permanently soldered into my case.

I got out my roll of tubing and tubing bender and started to bend up pieces that fit inside the case. This took a lot more work than it looks, for the simple fact that it is very hard to visualize how the bender will bend the tubing before you actually bend it. I wasted about ten feet of tubing with pieces that had a bend going the wrong way. 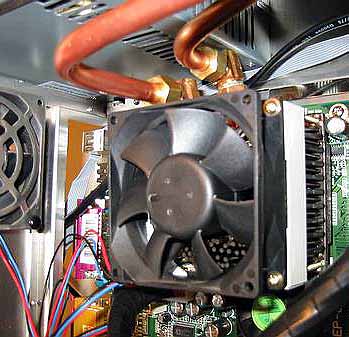 I tightened all the compression fittings with a little bit of silicone to seal everything up, and set out to test the system. Of course, without any computer parts installed, I tested the system for a couple days. Now here’s one of the worst parts of the system:

Because the pump sits directly below the CD-ROM, I have to fill the system with a drinking straw and funnel bent to curve under the drive into the hole. I found one small leak, which was fixed with some extra silicone around a compression fitting, and everything was ready. 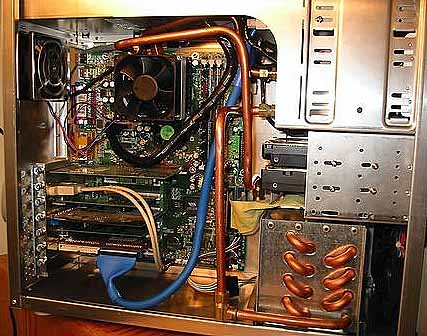 Here’s one other bad part of the system I found while assembling it: Because I use hard lines for my water, the motherboard must be inserted into the case in order to screw the waterblock on. Also, I’m using the screws and springs that came with the ‘8045, and with the extra 1/8th inch plate sandwiched in, there is substantially more force put on the core.

It hasn’t caused a problem, so I left it the way it is. The one last big problem, caused again by the hard water lines, is that the effect of leveling the waterblock with the screws is greatly lessened because the lines hold it at the angle they are bent to. This hasn’t been a big problem because the lines have been bent to exactly level to the core.

Some other minor things done inside the case: All power cables have been wrapped with black electrical tape, and the hard disks have been mounted in the exposed bays backward (the connectors face forward) both covered up by the drive and the bay covers, so that the connector mess associated with the HDDs is nonexistent.

Thanks for reading my ramblings.

These days, when I get on the computer in the morning and look around, I feel like I’m almost guaranteed a steaming, heaping plate of bullpoop for breakfast by certain Green people. Does anybody else feel that way, too? In

I’ve had my HP ZE5517EA laptop for almost 1.5 years now. Lately it sometimes BSOD’s or simply locks up. It’s been returned to HP when it was still under warranty but they sent it back, stating “fault not reproduced, updated

The Inquirer has an article about the revised power requirements for boards that are supposed to support Prescott. For those of you without current 865/875 mobos who are wondering, “What’s the big deal about this?” perhaps a few graphs will