UPDATE 1/15/00: Ryan Yadsko sent me this review which features his experience with both the PAL 6035 and Coppermine 500E:

Having just picked up a Coppermine 500E and an IWILL Slotket II on Friday, I was eager to apply some serious cooling to see how far I could take this thing. For months we had heard to high points of the Coppermine: integrated L2, a .18 micron fabrication process, “flip-chip” where the silicon die is actually flipped right side up (as opposed to Intel’s previous efforts, where a metal slug was necessary to conduct heat through the chip), and more. Intel is still using aluminum for its interconnects, though, but with AMD’s new monster fab in Dresden, Germany coming online, we’ll see copper soon enough.

I don’t know how many people have one of these Coppermines yet, but I can tell you it’s amazing to hold in your hand. Remember the way the PPGA Celerons make the original Pentium chips feel like bricks? The FC-PGA Coppermine makes the PPGA Celeron feel like a cinderblock. It’s amazing how small and lightweight these things are. I don’t know how AMD is going to ever package their Athlon’s monster core and components into such a small package – I’ve held naked Athlons with the casing plates removed, and believe me, they’re pretty substantial.

I stuck my Coppermine (retail box, SL3R2, Malaysia, FPO/Batch #Q948A001, pack date 11/27/99) into the Slotket with the Intel retail heatsink (don’t worry, it’s actually a much better unit than those they pack with the PPGA Celerons) and began the journey. After a few minutes I had it up to 700 (5.0*140) on a Soyo 6BA+ III. 700MHz from a chip specced to only 500, done with the retail heatsink. I let distributed.net cracking stress the CPU to 100% utilization overnight and in the morning it was still running. The temp in the processor core (via Winbond internal thermal diode) varied. Usually at 100% utilization it hovered around 95 degrees Fahrenheit.

I tried to go past 700 but I couldn’t stay too stable; 710 was about 75% stable and I couldn’t get a clean boot at 720 (even with voltage tweaking up to 1.80 volts). At 720MHz, the faithful Soyo board is running at a front side bus of 144MHz, a full 44% over spec. Additionally my RAM has to handle it as well, and you can forget about any 3D stuff, courtesy of the astronomical 96MHz AGP bus.

Time to backtrack, I thought. I set everything back to 700MHz and ran like that this past weekend. Miraculously, I couldn’t crash the system no matter what I threw at it, including DVDs and 3D games! At 140MHZ FSB my AGP ATI Rage Fury didn’t so much as break a sweat. This past weekend, operating at full AGP 2X with ATI’s latest drivers, the ATI card performed flawlessly. DVD movies (and, I’ll admit it, DVD pR0n, to use illiterate hacker terminology) at full screen? Fine. OpenGL? Fine. Direct3D? Fine. I couldn’t believe it; here I am running my card at an AGP speed that I couldn’t get a VooDoo 3 or a TNT2 Ultra to run at, plus I’m at 1024*768 in 32-bit color, and the card handled everything I gave it. Amazing.

Anyway, Sunday night rolls around and I’m bored, so I crack off the case and vow to take the chip higher. There must be a way; I’ll take it higher or fry the chip a la

By Monday afternoon I was deranged; a lack of 1) sleep and 2) overclocking success had turned my mind inside out. Time to return the chip to the “weak” 700MHZ (see how quickly overclocking has spoiled me?) and go sleep it off. Monday night I awoke (yes, see what disastrous effects a long Winter Break can have on a college student) and started browsing my bookmarks, looking for something outside of Water Cooling or anything with “Kryo” in the title that might help me get some more out of this chip. I had heard of the “new” Alpha cooler and considering the good results I got with the copper-inlaid P3125 (P III 450 SL35D @ 650MHz, currently in my webcam box) I couldn’t wait to learn more.

First off I saw the Overclockers.com Review and I was let down. I would think the thinner (and more in #) fins and the copper inlay might help stubborn Coppermines go a bit faster, considering the small surface area of the chip that is actually touching the heatsink. 28 million transistors packed into a 106mm² die means a cooling “bottleneck” and there had better be some serious heat transfer going on!

I then ran across the review of the new Alpha at the excellent heatsink guide. The review was somewhat more positive, putting the Alpha in the same league as the GlobalWin “No Chance in Hell on a BP6” FDP-32. In the end it was basically a tie, but let’s face it: the FDP-32 is one monster of a heatsink, so whatever the Alpha was packing must have been pretty serious (remember the moniker “Alpha killer” for the FDP-32?). The only reason I didn’t try one was because it wouldn’t fit on the Slotket.

Tuesday comes around the I stopped by 2CoolTek and see a news blurb. Ian says he is “simply amazed” by the results of the new Alpha. I follow the link to the socket test.

The results are pretty stunning. It blows every other ‘sink out of the water, including the FDP-32. A performance index of 70.2 (higher is better, ranging all the way down to 55.1). Could this be the solution to my Coppermine woes? If anything was going to do it, this was it. I get Tony of the excellent Plycon on the phone and ask him about it. They’re in stock! We chat about it for a bit. I decide I’m going to take the plunge. I placed my order online for the ‘sink and a 26CFM fan and patiently awaited its arrival via
USPS.

Thursday afternoon my Alpha shows up. As for initial impressions, it looks like a very well-engineered unit. Think of it as a Socketed version of the P3125: black anodized fins (thinner than on the PFH6035) and a spiffy copper inlay. The retention clip has been improved, as well: I slid it right onto my Slotket without problems. The Alpha mounted cleanly, no shims or spacers needed as with the previous version if you’re planning on mounting on a Coppermine.

This Alpha PAL 6035 is an excellent cooler. I have a few numbers here. All readings are in degrees Fahrenheit:

Interesting readings…at idle the 20CFM fan (had one lying around from a GlobalWin CPM-32) has a bit of an advantage over the Y.S. Tech 26CFM. The larger one, though, helps at 100% CPU usage (via distributed.net cracking) and the big one sucking air from the heatsink keeps it at 84 degrees. I don’t know what these numbers mean when compared against an FDP-32 or another unit but they seem pretty impressive to me.

I still wasn’t able to run the CPU any faster than 700 on the BX board. I switched out the BX board for my AOpen AX63 Pro, which has official 133MHz FSB support and was previously inside my webcam server. I was able to take the CPU to 775MHz (155*5.0) on the AOpen board (when setting DRAM speed to CPU clock minus 33MHz), quite an improvement over the BX chipset. Of course performance of the Via chipset isn’t up to that of BX, but I’ll settle for those drawbacks in return for the extra speed. Plus, there’s an official /2 AGP divider @ 133MHz FSB, so at the 155MHz front side bus the card is only running at 77.5MHz.

The Alpha helped me take a pretty big gain over what I was using previously for cooling (GlobalWin CPM-32 with the same 26CFM fan). I doubt it well help everyone else as much as it did me, but I’m happy with the results. I can’t wait to get my hands on the 550E variant of the chip – the slightly higher multiplier would make life a whole lot easier for us BX users. I’ll probably get one in a few weeks, maybe once they drop to the current prices of the 500E.

Why did I write this? I think it’s because I’m now having another pot of coffee, my second of the day, and for good measure I downed a tin of Penguin Caffeinated Peppermints for good measure, and I’m trying to get used to seeing my fingers type 5 times faster than they usually do. Anyway, I hope you take something away from it (besides these HardOCP’ish stoopid links) and I wish you success in your overclocking. Just remember: Don’t be stupid, get some protection before you go too far with a chip (all right, that gag went way too far).

I ran the two Alphas with a PIII 500E Coppermine using a slotket on a SOYO 6BA+IV. As you can see from the results in the table below, the difference between the two is negligible (0.2 C – but note the incredibly uniform temperatures). I don’t know what the pricing will be for the copper-based Alpha, but I’m frankly hard pressed to see a compelling advantage. Copper is better, but the Coppermines run so cool that in practical terms I doubt you will see a difference.

The PAL’s clip is better than the PFH’s for Coppermines, so I would tilt in favor of the PAL 6035 for that reason, assuming reasonable pricing.

SUMMARY: The new Alpha Socket 7 features more fin area and a copper insert in the base. I would have expected more of a performance difference compared to the plain-jane PFH6035 but found a minimal difference. 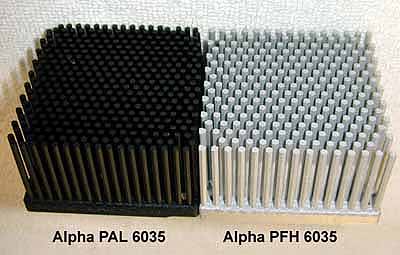 Alpha was kind enough to send me their new socket 7 heatsink, the PAL 6035 (specs HERE). A close cousin to the now aging PFH 6035, the PAL features more pin fins (hence more fin area) and a large copper insert in its base. The clip is a bit different but more robust than the original. Both are very easy to attach and detach from the socket. 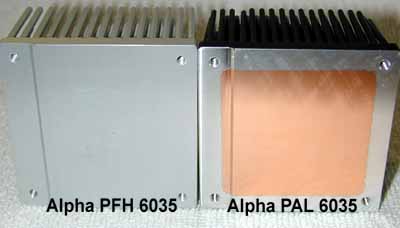 I mounted each in turn on a slotket using my BX6-2 as the test platform. A C366 @ 550 was used with thermal diode temps measured by Motherboard Monitor. I ran Prime 95 until temps stabilized, then took 300 1-second temperature samples. The table below reports results:

NOTE: Each Alpha used the YS Tech 26 cfm fan, temps are thermal diode temps reported by Motherboard Monitor while running Prime 95. The 500E tests were on a SOYO +IV.

I would have expected much more of a temp difference between the two, but 0.6 C is all I could get after multiple runs. I think Alpha is having a tough time improving on the PFH 6035 design and the PAL probably represents the best attempt without a wholesale redesign. I have found the PFH 6035 capable of absorbing a lot of heat (for example with peltiers) and it may be that the temp range of these tests does not show the PAL in its best light.

The Alpha PAL 6035 looks great and it an outstanding performer, but folded and bonded fin heatsinks are coming on strong and represent the new generation of price/performance CPU Coolers. The workmanship is outstanding but whether the performance gains are worth it remains to be seen.

After playing around with my air cooled Duron 700 for a while, I finally decided to close my computer case and finish experimenting. By then it was running quite stable at 1008 MHz under the max 1,92V my Abit KT7-R