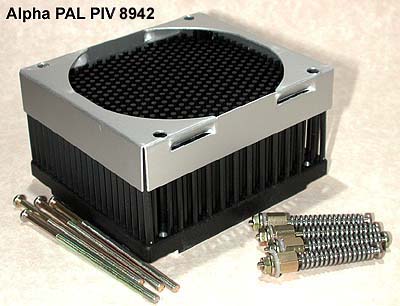 A while ago we took a look at the Alpha PAL 8045 Socket A version. It’s not a stretch (actually, it was) for Alpha to come up with a PIV version; all the elements are there (spring loaded bolts, shroud, etc) and, aside from different sizing, it looks a marginally easier to manufacture. The base 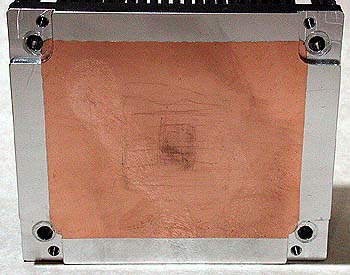 is simpler – no step for a socket cam. The base finish is very good but not exceptional – there are very fine polishing marks on it; lapping might improve performance a tad but I think not worth the effort (the marks are on the base are exaggerated by the flash angle).

The fins are typical Alpha: 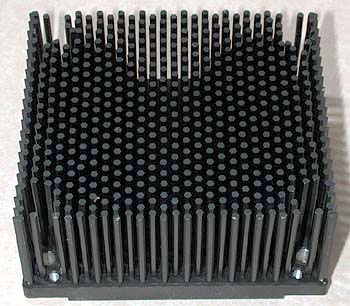 Lots of them and hexagonal shaped. All told – typical Alpha quality.

Readers have been asking for a range of fan speeds when I test heatsinks, and I’m in the process of setting up testing for this. In the interim, I tested the Alpha with the following fans:

I measured noise using a Radio Shack sound meter placed 8″ from the fan’s intake and found the following:

Manufacturers meter sound at 3 feet from the fan, so the dBAs I measured do not correspond to the manufacturers ratings. However, the relative rankings are roughly similar.

The Alpha PAL 8942 was first tested on the CPU Die Simulator which gives results that are unaffected by motherboard influences. I then tested it on a Lucky Star with a PIV 1500, which is modified to read CPU case temps directly, as an example of what users might see on their systems.

Die Simulator results place the Alpha PAL 8942, with the Delta 4800rpm, in the top rank of heatsinks tested (Heatsink Ranking).

The difference between aggressive cooling/high noise and “reasonable” cooling and noise is about 4C over 100 watts. Very low noise will cost you about 9C in cooling over 100 watts. For a CPU radiating half that, the difference starts to fade very quickly (note: 38 dBA is the generally accepted noise standard for PCs).

The upshot is that for the AVERAGE user who is not pushing the CPU and spends most of the time for surfing and email, a quiet fan, such as the Vantec Stealth, can do the job OK. Each user must make a choice, balancing cooling needs vs noise tolerance. The graph above gives an indication of what these choices might yield.

Alpha’s PAL 8942 is a fine choice for PIV cooling. Depending on how aggressive your cooling requirements are, noise can range from the sublime to the ridiculous.