When I put together my Alpha PFH6035MFC for use on my PC100 Socket 370 to Slot 1 converter card, I had to take the assembled Alpha apart three times before I found the proper way to mount it. In the interest of saving you some time with this particular installation, I’ve put together the following instructions. As you’ll quickly discover, I’m no graphic artist, but the diagram will no doubt be enough.

Note that this information also applies to a Socket 370 on a motherboard.

1. You’ll need 1 Phillips screwdriver and some thermal paste to complete this installation.

3. If you’re using a converter card, remove it from the motherboard. Don’t forget to disconnect the power cable! (In my haste to get the Alpha installed, I did!…”RIP!”…duh…)

4. Remove your current fan assembly and clean up any old thermal paste already on the CPU.

5. Take a good close look at the PFH6035MFC and included parts:

o The provided clip that will fasten the socket 370 can only be set in one direction.
o The bottom of the heat sink has an indent that will go over the exposed plastic part of the Socket 370 (the part of the socket where you see “SOCKET 370” written).
o The Socket 370 mounting clip has two different ends: one with 3 openings and one with a single opening.
o The fan shroud for air-flow control will be sandwiched between the fan and the heat sink.
o The supplied Sunon fan has markings on its side that indicate the direction of air flow.
o There are four screws, four flat washers, and 4 short aluminum standoffs provided.

6. Remove the fan shroud and the clip from the heat sink and look at the clip vertically with the 3-openings end at the top, with the middle spring section curving towards you.

7. Holding the Alpha with it’s bottom indent at the top, place the clip into the second row from the left (see diagram). The other side of the clip will go into the 4th space from the right.

When I tried to install the PFH6035MFC with the clip centered on the heat sink, I had a problem with the socket 370 ZIF lever; the heatsink would ride on the lever and prevent proper contact with the CPU. When mounting the Slot 1 adapter back onto the motherboard, positioning the 3-openings end of the clip on this end of the heat sink allows for better support at the top of the heat sink (most motherboards are mounted vertically, unless you have a desktop case, in which case this doesn’t matter). Most Socket 370 motherboards mount with PCI/ISA slots down, so this also applies.

8. Align the fan with the fan shroud so that the screw holes match up, with the fan direction arrow indicating airflow out of the heat sink (with the “Sunon” logo showing).

9. Put all four screws through the holes of the fan and shroud.

10. Put an aluminum standoff followed by a washer on each of the screws protruding from the inner side of the fan shroud, pushing them all the way to the shroud. 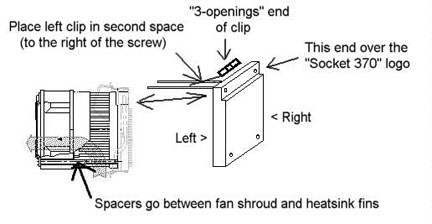 11. Mate this fan/shroud/screw assembly and the heat sink, with the mounting clip aligned as above. You’ll have to work with both horizontally so the standoffs and washers don’t fall off the screws.

12. Now tighten the screws into the base of the heat sink. Do 2 diagonally opposite screws first, and then the other two (easier). DON’T TIGHTEN TOO MUCH! This is aluminum…

13. Now you’re ready to mount the Alpha on the CPU. Apply a thin layer of thermal grease on the CPU and place the Alpha on it so the indent on the bottom of the heatsink is over the “SOCKET 370” logo. Attach the 3-openings side of the clip to the “SOCKET 370” side of the Socket 370 first (it’s easier than the other way); two of the openings will attach. Then pull down on the single end of the clip and attach it to the other side.

14. If you’ve done all this properly, the PFH6035MFC will look offset from the Socket 370, but it will sit on it without covering the ZIF lever, and will be flush with the CPU.

15. Marvel at your handiwork.

16. If you’re using a Slot 1 adapter, place it back into the Slot 1 and put the adapter support clips back. Attach the fan connector to the appropriate connector on your motherboard and lose some heat!

1. My motherboard is an AOpen AX6BC. On this board, the PFH6035MFC on my Slot 1 adapter extends over first row of my DIMM sockets (this is a big heat sink!). Since I use one 128 Meg stick, I just relocated it to the third socket. If this is an issue with you, you’ll have to shorten the screws by the length of the standoffs (using a screw cutter) and not use the standoffs. In one of my attempts at mounting the heatsink, I placed the standoffs between the screw head and the fan, thinking the standoffs were there to compensate for the screw length. The heatsink still performed admirably, the results below having been achieved with that assembly. But if you’re running the heatsink really hot, you’re probably better off using the standoffs to prevent any excess heat affecting the fan or fan housing.

2. I’ve successfully overclocked my PPGA 300A (SL36A) to 450 MHz (2.0 core voltage) using the PFH6035MFC. It wouldn’t last 10 minutes with my old heatsink/fan. The AX6BC doesn’t have a separate temperature monitor I can use for the CPU core, but so far the system seems stable (4 days now) and the system temp doesn’t seem to get above 85 degrees F (case open) – this is one efficient heatsink! I do have some concerns, as the air blowing out of the PFH6035MFC is warm (not hot) and it blows slightly over the memory chips and onto my hard drives. I’ll probably relocate my drives and provide additional case cooling eventually.

3. When I first mounted the PFH6035MFC on my CPU (before I put thermal grease), I looked at the assembly edgewise and noticed a hairline opening between the heat sink and the CPU. This is one reason why it’s recommended you use thermal paste. Turns out only two edges of the CPU were in contact with the heat sink. One person wrote to Overclockers and mentioned sanding the surface of the CPU down. Since I’m not really pushing the envelope (I’m happy with 450 MHz), I judged the thermal paste to be enough, and so far it is. If anyone knows otherwise, please let me know!

SUMMARY: A newcomer to the scene, the Fortis A102 proves to be a very competitive heatsink for Socket A/370 CPUs. Measurements: 63mm x 63mm x 58mm; Weight 371 grams. The good folks at Fortis Technology kindly send over three heatsinks

UPDATE 8/18/01: We had a few days of really cold and foggy days, and ‘THINK” went off line again. Once again, the unloaded peltier started to hover in the mid 30’s, which was too close for comfort. So I ran