When I started getting into system modding, I first built a little crappy water cooler with spare aquarium parts lying around – nothing serious. So after a bit more reading on the web, I became enchanted with the idea of phase-change cooling.

It seems like the best way to get results and even if you don’t get them, you can have lots of fun playing with compressed gas and whatnot. (I’m not going to go into the theory behind phase-change coolers as there are tons of resources on the web about it.) 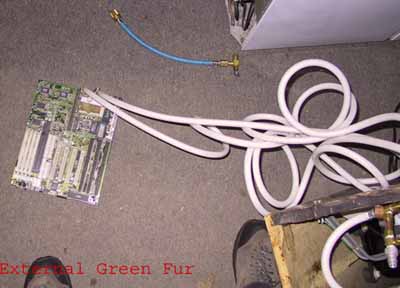 So I was cruising around my town on trash night and I saw a dehumidifier. On principle, I tend to grab anything that might work out of other people’s trash. I know it sounds weird, but people in my town will throw all kinds of working stuff away (my basement can testify to that: 2 monitors, 2 printers…). So I popped it into the trunk and proceeded to test it.

Sure enough there was one minor problem: The big fan would die after a while, drastically reducing efficiency. Having identified the problem, I kept my eyes open for another dehumidifier and lo and behold, a few weeks later I got one. This time, the fan worked.

So I began to sketch some ideas. Since this was the first phase-change system I’d made, it wasn’t going to fit in my cruddy old tower case; the compressor was just too big. So I settled for an exterior design. I had an old slashed speaker lying around (yes, from the trash) and got the idea to put everything in there and run tubes to and from the case. 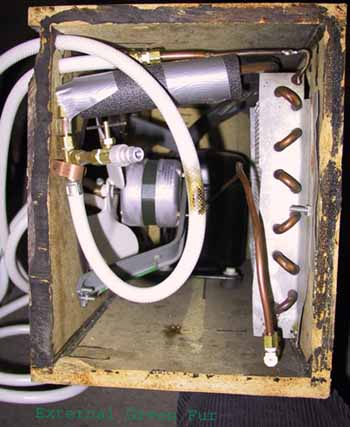 Well, to cut to the chase, I decided to put the fan where the speaker cone was, the radiator behind it (where the terminals were) and the compressor in the back. I went to Home Depot and bought lots of ¼” copper tubing, tons of goose-clamps, lots and lots of copper connections/adapters, one valve, pipe insulation, two “ice machine” cable kits, some propane torches, solder, flux, and a couple of nuts and bolts. 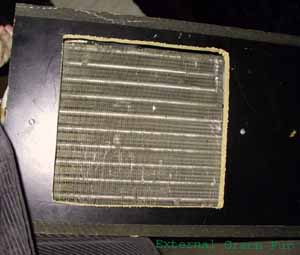 I emptied the speaker case, cut the holes (radiator rectangle, two for tubes, and cut the bottom off) and began to disassemble the dehumidifier. So what did I do with all that Freon? I let it out. I called around many recycling places and they all charge over $75 for collection. Given that the unit was probably going to burst at the landfill, I didn’t think it was too bad to let it out – after all I was learning! 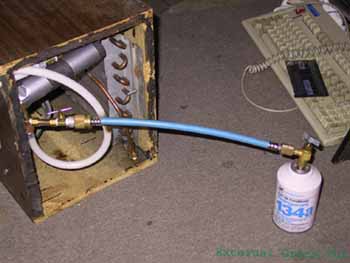 How did I fill it? R134a. I went to auto zone and bought a kit of air conditioning refill for cars. It comes with a strange adapter, which I promptly forced into a valve. That actually worked wonderfully. 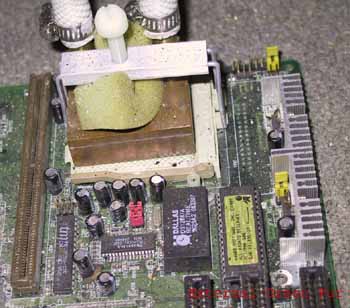 So after many failed attempts to get the copper tubing to solder the way I wanted, I got it. I put all the equipment into the box, hooked it up to a Danger Den Maze water block and filled it up.

This is where the problems started cropping up.

First and most importantly, the unit leaked. When I plugged it in, I could hear a constant “hssss” coming from various parts of the tubing. After the unit was unplugged the hissing would continue until the pressures equalized. That’s not good.

After many re-assembling sessions, I managed to cut the leakage down considerably, but it was still there. This is one of the main problems I had with the final product; if anyone else out there is planning to attempt this, make sure to either get really good at working with copper tubing adapters, or just solder everything.

Another problem I had was that I put the pressure change (change in tubing diameter on the compressed side) much too far from the water-block. As a result, the fluid was cooling all the tubing up to and beyond the water-block. So, I got ice crystals forming inside the box and on the tubes going to and from the computer.

But, here’s the good news: When it was on, it worked. The radiator got really warm and the water block got very cold. In fact I recorded temperatures around -20C. Of course, this is without load, so real temps would be much higher, but it worked.

Given the problems I had, I wasn’t about to test it on my only computer (a puny K6-2/550). I was content to make it actually work. I still have the unit in my basement, so if you want more pictures, have specific questions or just want to yell at me for adding to the greenhouse effect, drop me a line.

In the United States, they call it Telephone. You might know it as as Chinese whispers or Russian Scandal, or something else. Whatever you call it, Wikipedia describes it as: “a game in which each successive participant secretly whispers to