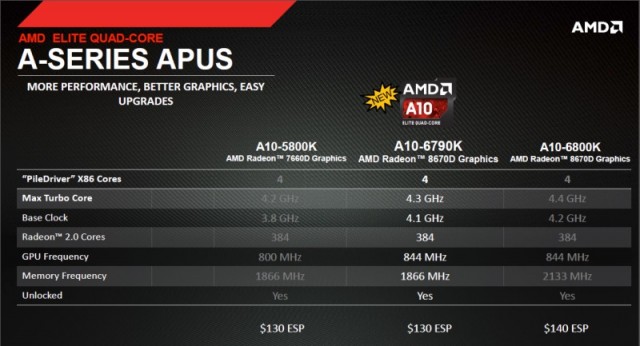 As you can see by the pricing shown in the above slide, the A10-6790K is positioned to be a price point replacement for the A10-5800K Trinity APU. AMD tells us there should be roughly a 5% increase in performance over the A10-5800K while keeping the same price level. There’s nothing wrong with that!

AMD also discussed the influx of partner A88X chipset FM2+ motherboards making their way to market. These new motherboards will support the eagerly anticipated Kaveri APUs and still offer backward compatibility with Trinity and Richland APUs. The other significant change the A88X chipset brings is Raid5 capability, which is not found on A85X chipset motherboards. 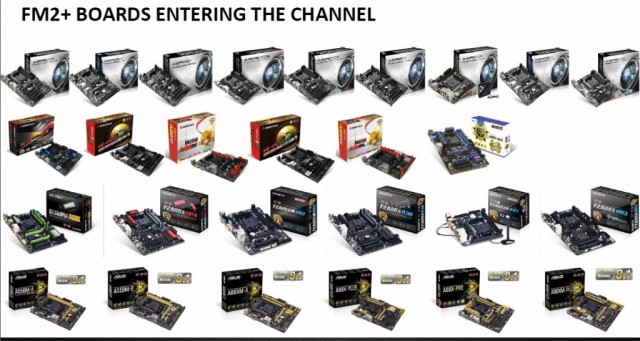 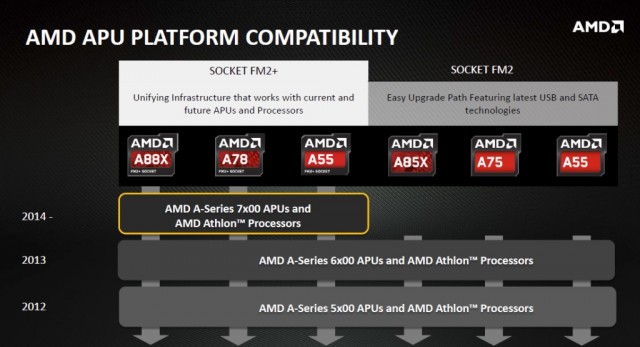 “AMD’s ‘Kaveri’ high-performance APU remains on track and will start shipping to customers in Q4 2013, with first public availability in the desktop component channel very early in Q1 2014. ‘Kaveri’ features up to four ‘Steamroller’ x86 cores, major heterogeneous computing enhancements, and a discrete-level Graphics Core Next (GCN) implementation – AMD’s first high-performance APU to offer GCN. ‘Kaveri’ will be initially offered in the FM2+ package for desktop PCs. Mobile ‘Kaveri’ products will be available later in the first half of 2014.”

In the meantime, the A10-6790K offers another low cost APU option for system builders and AMD fans to explore.

Tuesday News Roundup: The Future for Intel and AMD

AMD and Intel are making waves with new product offerings ranging from unlocked APUs to high-end enthusiast CPUs. We compiled rumors and reports from around the web.

It feels like it has been years since we’ve had an AMD CPU on hand for a review, because it has! The last part we saw was an APU back in 2014. Since those years ago, AMD has come out with a completely new architecture, moved to a 14nm process, gotten rid of those “modules” we’ve grown accustomed to, and are boasting a self-proclaimed 52% IPC gain over their previous CPU. Desktop processors now range from four cores without SMT (Simultaneous Multi-Threading) all the way up to eight cores with SMT. All of the processors have a vastly reduced TDP with the highest SKU coming in at 95W (just four watts higher than the i7-7700K). This is a huge improvement of the 220W the top Vishera CPU pulled down and the 125W of the FX-8580.

Today, specifically, we’ll be talking about the Ryzen 7 series, the flagship 1800X CPU in the lineup. IPC improvements are huge over Excavator, thread count is up (depending how you view modules the core count is up also), and I know all of us enthusiasts are excited to see the new challenger who has been looming. That said, enough from me, let’s get to the chip.