SUMMARY: If you see CPU temps much over 65 C, AMD tells us you’re too hot.

I get a number of emails asking me “My Duron/T-Bird runs at 45-50-55-60-65 C; is this too hot?” In my book, anything over ambient is too hot, a great goal but not realistic for air cooling. For an answer, I took a look at some AMD specs to see what AMD recommends. I’m going to look at two areas: AMD’s recommended temps and the difference between cooling Durons and T-Birds.

AMD’s absolute temp maximum is 90 C up to 1000 MHz and 95 C over that. Anyone even close to these temps is one step away from a toasted CPU.

C/W means that for every watt the CPU radiates, the heatsink is supposed to cool the core by C/W x watts plus ambient temp. AMD specs system temp at 45 C, which is on the warm side. What all this means when you run the numbers is the following:

Now that’s AMD’s Guideline; if you’re overclocking, my experience has been that temps in the mid 40s and up will start to impact stability. Temps per AMD are OK at normal speeds and voltages, although anyone used to Intel’s temps has a hard time when they see numbers like this – I know I do!

So if you just adhere to AMD’s spec, anything over 67 C is not recommended. Hopefully you do better than 45 C case temp, so you should knock at least 10 and better yet 15 C off the 45; this gives you something like 50 C, assuming a 30 C case temp. That’s about the upper end of “acceptable” from our perspective.

It’s no surprise that we are seeing a lot of heatsinks coming with Delta 38s – how else can they deliver cooling temps that we consider acceptable with older heatsink designs? This new crop of “screamers” is pushing C/Ws into the 0.25 range; this means, with a case temp of 30 C, CPU temps of 47.5 C at 70 watts is achievable.

For my taste, temps between 35 C and 45 C are achievable and recommended.

Now, there is a difference between cooling a Duron or T-Bird. The Duron’s diesize works out to about 97 mm² and the T-Bird to 133 mm² (same source cited above). This is NOT a lot of surface area, and when you throw a LOT of watts onto a surface this small, the cooling challenge gets pretty severe. Graphing out this relationship drives home the difference between the two CPUs: 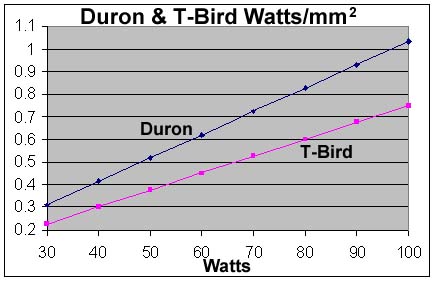 What the graph shows is that cooling a T-Bird is actually an “easier” task than cooling a Duron. For example, a heatsink cooling an 80 watt T-Bird has to deal with about the same amount of watts/mm² as a Duron running at about 59 watts. Think about a 100 watt light bulb and a 100 watt soldering iron; both radiate 100 watts, but cooling the intense, compact tip of the soldering iron is a lot tougher than the large surface area of the light bulb.

As you shrink the diesize, heat is concentrated into a smaller area. Using the same heatsink, the Duron will run hotter than the T-Bird at the same speed and voltage.

The “so what” of all this is that overclocking Durons is inherently a tougher challenge than overclocking T-Birds, and any heatsink that does well on a Duron will probably do better on a T-Bird.

The Other Side To The AMD Deal

There are inherent problems with the Abu Dhabi/AMD deal, but they’ll happen later rather than sooner, and maybe not at all.

The next great overclocking frontier. –Ed