The downside is that the amount of heat when overclocked harkens backs to Intel’s Prescott. There’s a good review HERE that puts the 955 through its paces and compares it to Intel’s i7 920 and Q9650, although from what I can see both of these are at stock speeds; this is similar to AMD’s bit of puffery shown below: 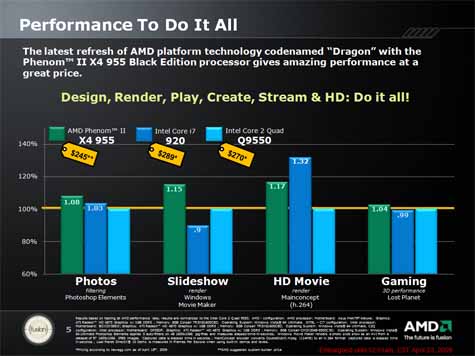 One key point that popped out was how many volts it took to get from its stock 3.2 GHz rating to 3.77 GHz overclocked: 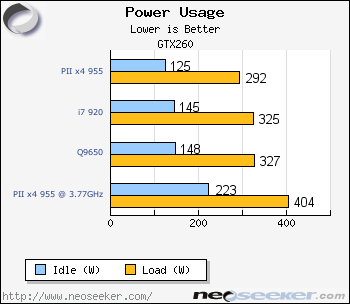 404 watts is a LOT of heat to dissipate, especially with air cooling. In addition, an 18% overclock is not all that impressive compared to what some are getting on air with Intel CPUs. There appears to be a bit of puffery in announcements of the 955 touting an overclock to 6.5 to 6.7 GHz – this is super-cooled with liquid nitrogen and liquid helium, which hardly relates to what is achievable with more normal cooling. This is what it takes to get to 6.7 GHz:
“The amount of helium required is huge. To cool a PC for 90 minutes requires 250 liters of liquid helium inside a aluminum vat the “size of a VW Beetle,” Davis said. The helium is kept under such high pressure that a leak has the potential to push all of the other gases out of the room and asphyxiate anyone inside.”

One great app that AMD is offering is OverDrive 3.0, an overlocking utility for tweaking CPU speed, HyperTransport, memory speed and voltage. How far the OC world has come!

One advantage AMD offers is the ability to use existing platforms for the new CPU series, compared to Intel requiring new motherboards for the 17 series. This is not trivial and on a strict cost comparison, AMD will come out ahead. However, the 955 is competitive with Intel’s last generation technology and if it’s pure performance, Intel’s i7 is the way to go.

Overall is you’re on an AMD platform, this is good news. If you’re considering a new system, frankly I don’t see the advantage going with the 955 compared to i7.

We and others have been less than awed by the Bloomfields.  Others have sprung to Intel’s defense, but so far, they haven’t been too impressive.

Give Deneb A Chance

People have had some time to play with the i7s a bit and figure out the various voltages and multipliers and relationships between them all needed to make them purr.

If you’re looking for AMD to become competitive against Intel’s best, it’s pretty hard to come to any other conclusion after its financial analyst day.