Makes a great paperweight – do not use for serious cooling. — Joe

We recently purchased a boxed, retail AMD CPU which is packaged with a heatsink. Not having tested one of these, I thought it would be interesting to see what AMD thinks is adequate cooling. 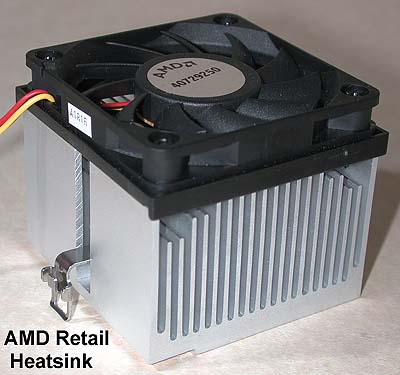 The heatsink is an aluminum extrusion with nothing extraordinary about it – smooth fins, etc. It has a fair amount of space between the fins to enhance airflow through them. 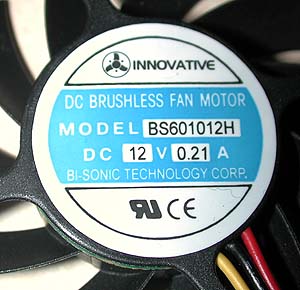 The clip rides on a half circle over the CPU’s center; it is also indexed, as shown by the picture insert. This enables consistent mounting every time. You need a screwdriver to mount it on the socket. 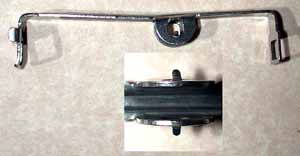 All told, AMD’s retail heatsink is about what you would expect – adequate cooling at the lowest possible cost. Let’s see what “adequate” means:

I prepared AMD’s retail heatsink by boring a hole completely through the base so I could epoxy a thermocouple above the CPU. The thermocouple is attached to an Omega HH23 Digital Thermometer. Ambient temps were measured with a thermocouple placed about 1 inch from the fan’s intake. I used Prime 95 to stress the CPU on an Iwill KK266+. Arctic Silver grease was used in all tests. CPU Case Temp is the temp at that point where the CPU contacts the heatsink.

Just to see what would happen, I also tested it using a Delta 38 fan.

Now, figuring that AMD is including this heatsink for some productive use, I tested it as a paperweight.

I aimed a housefan at a pile of papers with the AMD Retail Heatsink on top of them. The housefan was running at full blast, as shown below: 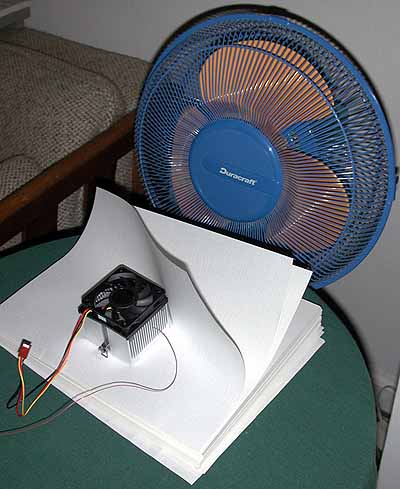 After 5 minutes of flapping papers, the papers stayed put.

AMD’s Retail Heatsink may be OK for your mother’s PC, but for serious cooling, it’s not even close. If you buy a retail CPU, figure it comes with a nice paperweight.


From Air to Water – Lessons Learned