The day is here to pre-order the second generation Threadripper from AMD at more than 80 e-tailers worldwide. This includes the Threadripper 2990WX which currently holds the world record in Cinebench R15 multi-threaded CPU test for a single socket system. 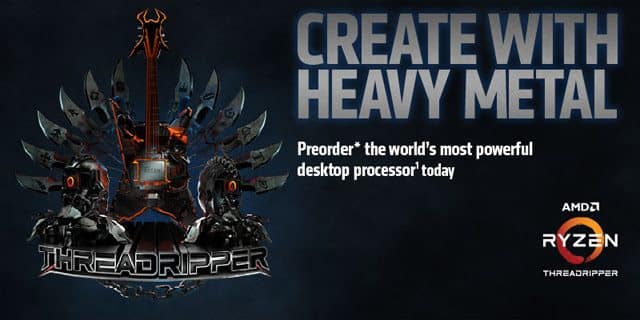 During a press event last month, the AMD Ryzen Overclocking team managed to push the 2990WX to over 5.1 GHz using liquid nitrogen. The team managed a score of 7,618 beating the current single socket record of the Core i9-7980XE of 5,828. This also beat the mysterious 5.0 GHz, Intel 28-core  CPU demoed at Computex earlier this summer which scored 7,334 in the multi-threaded Cinebench R15 CPU benchmark.

AMD is staggering the release of the second generation Threadripper CPUs from August 13th for the 2990WX, the 2950X will be available on August 31st and the remaining 2970x and 2920X will be coming in October 2018. See the table below.

All the second generation Threadripper CPUs will be supported on new and current X399 Socket TR4 motherboards available from all the major partners. Along with a wide range of motherboards, socket TR4 supports a variety of new and existing coolers such as the new  Wraith Ripper air-cooler showcased at Computex 2018 alongside the new Threadripper and it’s available from Cooler Master. With 64 PCIe Gen 3.0 lanes and quad-channel DDR4 memory with ECC support the new second generation Threadripper is tailored to HEDT(high-end desktop) delivering the ultimate desktop computing power for the most intense workloads.

“We created a new standard for the HEDT market when we launched our first Ryzen Threadripper processors a year ago, delivering a ground-breaking level of computing power for the world’s most demanding PC users,” said Jim Anderson, senior vice president and general manager, Computing and Graphics Business Group, AMD. “Our goal with 2nd Gen Ryzen Threadripper processors was to push the performance boundaries even further and continue innovating at the bleeding edge. Beginning on August 13, creators, enthusiasts, and gamers everywhere will get to experience the benefits of these new products.”

Beginning today Monday, August 6th, 2018 e-tailers such as Amazon and Newegg are ready to start taking orders for the 32-core, 64-thread Threadripper 2990WX launch. For a complete list of participating e-tailers and product launch information follow this link to www.AMD.com.

Today at CES 2017, here in Las Vegas, we had the pleasure to stop by and talk with AMD. Stay tuned for some details regarding both Ryzen CPU’s and Vega GPU’s. Read More

Industry sources reports that AMD is unable to meet the demand for its new SB850 southbridge. Some motherboards branded as 8-series products may feature last generation SB710 parts instead of the new SB850. Read More

Up on the test bench today is a DDR4 offering from Mushkin Enhanced. Their Redline Frostbyte features speedy XMP profiles and aggressive styling, but will it be compatible with AMD’s newest generation of motherboards? Memory compatibility on AMD’s X570 series platform is still problematic at best. Many of the memory kits on the market today were designed with Intel platforms in mind. Choosing a kit of memory at random and expecting it to work flawlessly on AMD platforms could end in a comparability nightmare. We’d like to explore this memory further and put it to the test on our AMD X570 based test bench. Read More