AMD just released their roadmap for the server market covering the end of of 2013 and the first half of 2014. They are proposing three types of products to encompass different types of systems, depending of customers needs. Seattle is a brand new CPU, based on ARM Cortex A-57 core, and will replace the Opteron X-series that have just been released by AMD. The new CPUs will feature up to 16 cores, will be system-on-chips (SoC) and be built on 28nm. 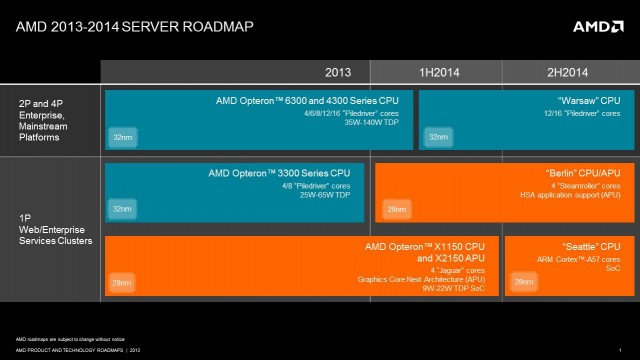 Berlin is a bit more interesting for the home user as it all but confirms the Kaveri APU. Berlin server parts will feature four Steamroller cores and it is said to support HSA. It will also be built on 28nm and should show up at the beginning of 2014. Those specifications are in line with the ones of Kaveri APU for desktop and laptops. Kaveri is expected to feature the new Steamroller CPU architecture, the evolution of AMD’s current high-performance core, Piledriver. It is also expected to have a serious update to its graphics processor, with the implementation of GCN architecture featured in Radeon 7000-series graphics. The new APU is expected to hit the market by late 2013 and, it seems, will be followed by the sever part.

The most worrisome part of this roadmap is in the high-end of the product range. Here, AMD announces a refresh of Piledriver-based products where the whole world was expecting Steamroller to show up in force. Instead, AMD officially announces Warsaw, a CPU boasting 12 to 16 Piledriver cores, built on the good old 32nm process, a manufacturing node that is already showing its age. AMD having an history of releasing its server part before the consumer part, this piece of news may point to the fact that the new Steamroller desktop processors are not coming anytime soon. Not before the third quarter of 2014 if we’re to believe this.

Now it doesn’t make much sense for AMD not to release the Steamroller architecture to the high-performance server market if it’s ready for the APU market? At this point it’s anyone’s guess, but one could think there some more performance/power optimization to be made.