While I’m sure most of you know it, or have at least read it here on Overclockers.com or elsewhere, dust can be a factor in controlling our common enemy – heat.

While we all should know this little truth, I think it is something that some of us forget – I know I did. For months, I ran my overclocked Athlon with a Chrome Orb as a heatsink. Probably not the best heatsink, but I got it cheap off Ebay when I was first building my current computer ($7.99 USD including shipping).

While I didn’t skimp on the quality of my components, I, being a poor student, was budget conscious and wanted a performance system at a reasonable cost. End result: My first home built PC for less than $900 Canadian.

Now to the task at hand. I first came to Overclockers.com when building my PC, and again and again, as I further got addicted to this hobby. I modded, and remoded, and so forth. I really went over board with fans, all for the sake of a few degrees cooler and a few more MHz. All the while ignoring this thing called dust.

I have since downsized my number of fans due to the excessive noise deafening me. I now only use one 120 mm intake, two 80 mm exhaust besides my PSU, all run at 7 volts. While it runs a lot quieter than it did, I found that the mighty 120 mm draws in a lot of dust and cat hair from the household’s 3 cats.

I never really noticed until one day I checked my system temps and found my CPU temp to be 57 C at 24 C ambient. Well within specs for an Athlon but not mine.

I shut it down, opened my case and there was hair, dust and lint everywhere – it looked like the lint trap in the dryer. Down to the computer shop in town and I picked up a can of compressed air and blasted all the fuzz away. I was amazed at the amount of dust and fuzz that was clogging my heatsink.

All said and done, I closed up the case, rebooted and started writing this article, and now my CPU is sitting at 47 C while running Seti comandline, downloading, listing to some tunes, and writing this.

Imagine: All that dust and lint being removed lowered my system temps by 9 Celsius. 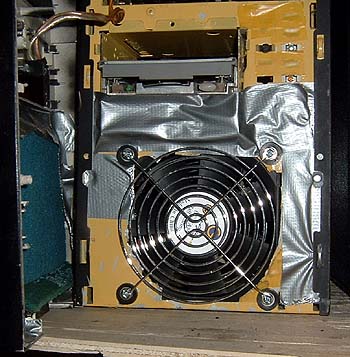 to keep that dust out for good, using some Scotch Brite pads and duct tape. 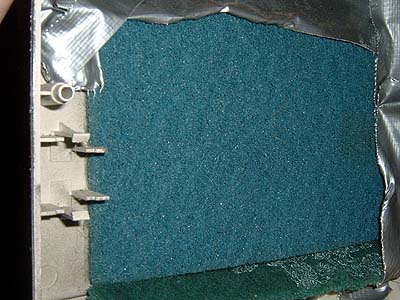