SUMMARY: The ANTEC SX635 is one of the best mini-tower cases I have seen. Well built, cooling friendly, strong and reasonably priced – worth a serious look. 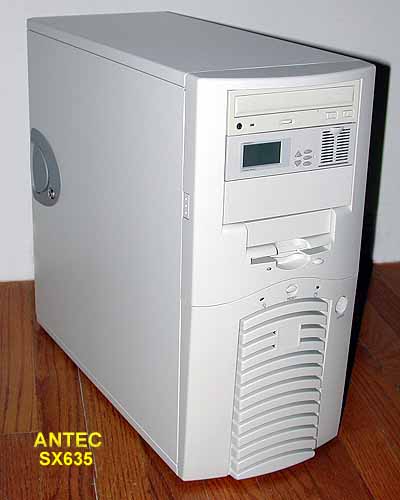 The good folks at ANTEC sent over their PC Case SX635 to test out. First thing I noticed is that this thing is HEAVY (23 pounds) – 1 mm steel is used throughout, and you can feel it right away. This case is beefy and well built.

The Power Supply is rated at 323 watts maximum. It uses two fans for cooling and I did not find it noisy (totally overshadowed by the CPU fan – a Delta 38 clone). It is ATX12V, 2.03 compliant including outputs for a Pentium 4. I found it consistently delivered voltages over 12 and 5 volts under load (12.60 and 5.15 volts) – a good indication of reserve potential.

The Antec SX635 has a number of very nice features which make it very easy to work on and add more cooling: 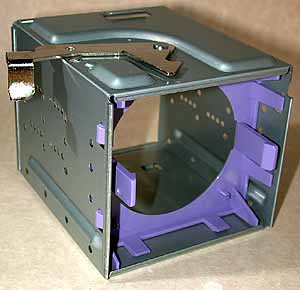 The Hard Drive cage is easily removable by sliding the top lever back and pulling the cage straight back; it holds three drives. Of even more interest is the fan bracket – you can snap an 80mm fan in place and use it to cool those hot spinning 10,000 rpm drives – a great addition. 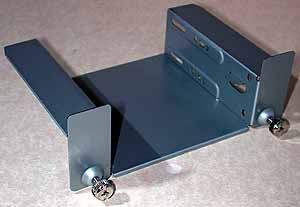 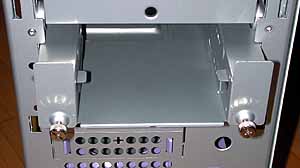 Simply remove the sleeve, screw in the drive/s, and slip into the floppy slot; the two large screws on the front hold it in place. 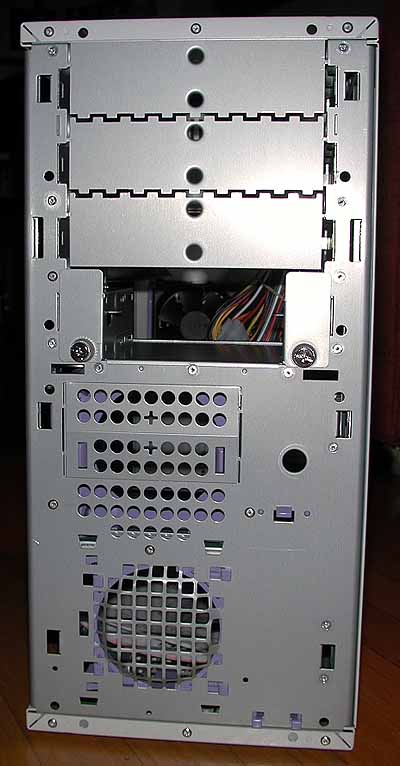 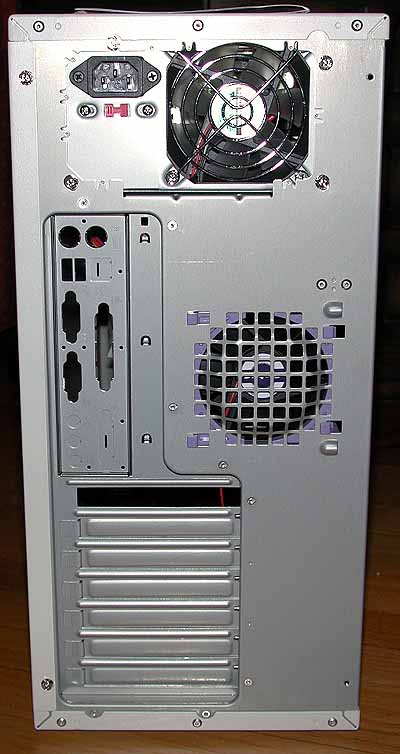 The back is very clean – only two airflow exits for the power supply and the rear exhaust fan; note the absence of additional holes. With this arrangement, air through the case flows front to back.

At the bottom of the case are guides for the CD ROMS. Attach the guides to the side of the CD ROM and then it slips and clicks securely into place. This makes insert and removal a snap. 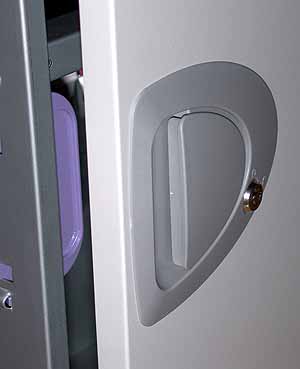 The sides pivot from the front; opening and closing the left side merely requires moving the recessed, locking plastic handle towards the front. This is the easiest side removal mechanism I have seen on a case – an absolute joy to use. If you routinely take the side cover off, this is the case for you. 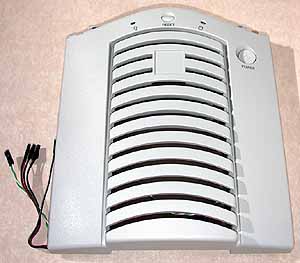 The plastic front bezel is in two pieces – I have not seen this before and it is very handy. I shot the front lower piece at an angle to show the generous openings for air flow – lots of cases cut small, choking holes that are more for decoration than anything else. This opening actually does some good. 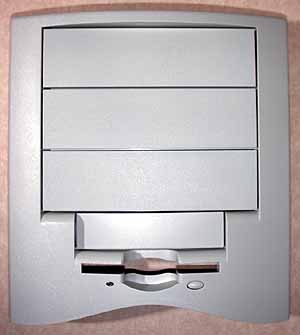 The front top is easily removable by two depressing tabs on either side. It comes off very easily, so that if you want to swap a CD ROM, for example, it takes all of about a minute to open the side, remove the cables, pop off the upper front and slide it out. 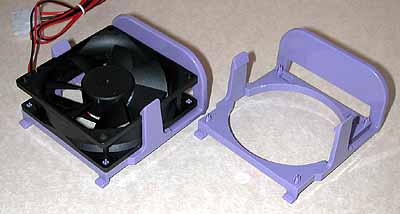 Finally, these are the plastic fan holders that are used for the front, rear and HD Fans. No screws – simple snap-ins.

All told, a lot of thought went into the design of this case to make all components easily accessible and removable. Also, more than the usual amount of effort was directed to enabling good airflow through the case. Kudos to the design team!

To test the case for airflow, I placed a bunch of sensors using a Digital Doc and some thermocouples in various places around the case, as well as recording motherboard BIOS temps for CPU and system using Motherboard Monitor.

I used the Iwill KK266+ with a T-Bird @ 1200, 1.75 volts, cooled with the noisy Fortis A102; this sports a Delta 38 clone. I found that the additional noise of the extra cooling fans was minimal compared to the heatsink fan’s noise. Frankly, I don’t know how folks using Delta 38s stand it – it’s really objectionably loud. I measured case noise with a Radio Shack Sound Meter held 8″ from the middle left side.

To test this case for airflow, I used only three 80 mm fans – two intake (one at the case bottom, one in front of the hard drive) and one exhaust (came with the case). After letting the board heat up by running Prime 95 for an hour, temps were recorded using the Digital Doc and thermocouples attached to the Omega HH23 Digital Thermometer. I then turned off fans, let temps stabilize, and recorded temps again. Locations were as follows: 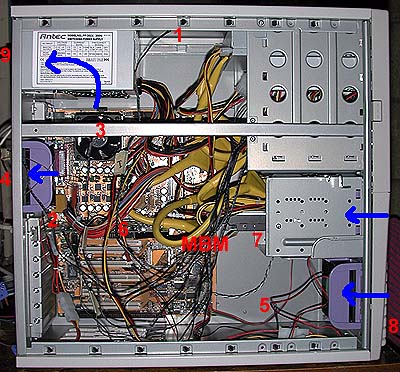 No question that a case without any additional fans is going to run hotter. Best cooling has at least one intake and one exhaust fan in addition to the PS fans. The Antec case emphasizes airflow by its use of large slits in the front bezel which allows for relatively unrestricted airflow into the case. Air movement is front to back.

Cheaper (and many expensive) cases restrict airflow into the case by using tiny air intake holes or none at all, relying on a gap between the case and front bezel or rear air holes. I routinely drill a five inch hole into my case fronts and mount a 120 mm intake fan for unrestricted airflow.

With the Antec, adding an intake fan at the front bottom lets the case breathe much more than without – a no-brainer. The CPU cooling benefit is almost 2C – almost a “gift” – with very little impact on noise.

The Antec SX635 is one of the most solid, accessible and cooling friendly cases I have seen. Based on my “cut index” (i.e., how many cuts I sustained while working on the case: 0), I give the Antec high marks for a beefy case without any sharp edges. This is no lightweight – 1 mm steel is used throughout and it is noticeably heavier and much stiffer than cheapo cases.

The cooling options in this case are welcome – it is very easy to mount additional fans with noticeable effect. If you have a hot drive, the 80mm HD fan option is especially welcome.

Couple all of this with the easiest side-opening case I have ever seen and the ability to remove the front bezels with no trouble at all – I’d have to say, the Antec is worth the money if you’re looking for this size case. Those of you looking for a LAN case might want to consider this one – although not light, its construction is well above average and looks like it can take some rough handling.

Thanks again to ANTEC for sending this case our way to test – a pleasure to test! 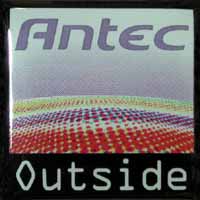 That’s the number of Opteron servers estimated to have been sold last quarter. That’s not a lot. Less than 1% marketshare. About double the number of Itaniums, but Itaniums aren’t selling for as little as $180, either. For those who

In the next few months, we’ll begin to see sizable flash-based hard drives show up. They’ll be expensive and relatively slow compared to what we’ll see two-three years from now, but that’s not what’s interesting about them. What is interesting

We asked yesterday if you would prefer an all-in-one electronic Swiss knife that could do everything, or prefer separate components for different functions. Well, the iPh— (don’t want to get the Cisco people any madder than they are) and its