Slowing down the fan. – Charles Smutz

When building a budget AMD system, I found the ThermalTake Volcano 12 and purchased it because it was relatively inexpensive for a large copper heatsink and it offered an interesting number of methods to control fan speed. What I really found attractive about this cooler was that it ties fan speed to CPU temperature. The kit includes a thermal sensor which is placed under the CPU and is connected to the fan control unit using very thin wires.

I wanted my system to be nearly silent when it is at idle. I don’t mind if it makes a little audible noise under full load, however. The problem with the Volcano 12 is that by default it runs about 2000 rpm at 20C and about 5,500+ rpm at 55C, according to the manufacturer. I found this to be true to the degree that I can accurately measure the CPU temp and fan speed with on board monitoring.

The fan’s noise level is near silent at about 2000 rpm and still seems to adequately cool an idle AMP XP at 1.65V. The problem with this, however, is that most aircooled AMD CPUs don’t idle at 20C, and the ones that do are in such cold environments that the owner probably wouldn’t care much about noise because he’s probably already wearing earmuffs to keep warm. At normal temperatures, the fan runs at 3,300 to 5,000 rpm; this is overkill not only because my CPU temp is never significantly above the case temp at these speeds, but also because this is unacceptably loud to me.

So out of the box, the thermal fan speed control turns out to be not everything it is cracked up to be – no matter how hot the CPU is, it runs too fast. My mod tamed this beast by allowing the user to slow down the fan using a manual control but also maintain some thermal scaling.

The Volcano 12 has two unique inputs for fan speed control. Both the thermal and manual controls connect to the fan using two pin connectors, but each is of a different type so that they are not interchangeable. The manufacturer’s supplied instructions specifically state that you can not use the thermal and manual (rheostat) controls simultaneously. I tested this and don’t recommend others trying this while the fan is running, especially if they have a history of heart troubles – I nearly wet my pants when I plugged the second one in and the Volcano erupted, spinning up to nearly 6,000 rpm and causing me to fear that my fingers might be sucked into it.

I experimented and by trial and error I determined how to use both control methods at the same time:

Connect both the manual and thermal control in series, then connect that to one of the fan’s speed control inputs on the cooler.

I wanted to do this mod without removing the cooler or CPU from the computer, soldering wires, or doing anything else too difficult, dangerous, or tricky. I managed to do so and will give some hints to those who want to do the same. All you need is:

Of course, you could perform this mod in a number of ways, but I will tell how I did it for those who want to do it quickly and easily. The easiest way to make solid connections without soldering is to use the provided connectors as solder-less joints. To do this, first remove one of the metal parts of the connector from the plastic part of each connector. This is accomplished by using the small screwdriver to push in on a little prong on the connector that prevents the metal from sliding out of the plastic.

After you have one of the metal connectors out of the plastic, strip bare about 1 cm from each of the wires on your extra two prong connector and wrap the bare part of each one of the leads around one of the two metal connectors you just removed from their plastic holders. You could stop there and put electrical tape around them or solder them, but I think it’s cleaner (and less permanent) if you use the connectors. Re-insert the metal part of each of the two of the connectors into their respective plastic holders and you have just finished the hardest part.

Now strip bare the solid core wire. Use it as a jumper between the two metal leads that you didn’t use in the last step. When finished, you should have one lead of each of the original connectors connected to one of the leads on your new extra connector. The other two leads (one in each of the two original connectors) should be connected using the bare wire jumper. This should result in the two fan controls being hooked up in series. Plug the new connector into one of the fan controls on the fan (either should work, but I used the one for the thermal sensor because it fit well) and you are done. The finished product should look something like this rough sketch: 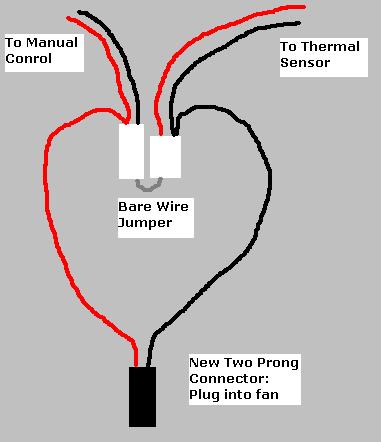 I have mine set so the manual control is one tick away from the max setting, or parallel with the slot it is in. At this setting, the fan runs about 2200 rpm at low temps (35-40ºC). It depends how the manual control is set, but when it starts heating up a little (~42ºC+), the fan will run anywhere from 2300-2800 rpm. I can just barely hear it speed up when it goes over 2500 rpm, but anywhere under 3000 rpm is acceptable noise-wise.

If for some reason it heats up (~48ºC+), I have seen it top 3200 rpm for a while until the CPU temp drops. If it gets hotter than that, it would scale higher. This setup works very well for my processor at 2.2 GHz and 1.65V. I can sleep a lot easier now that the fan runs at 2200 rpm most of the time, as opposed to over 3500 rpm. If I run above 2.4 GHz and above 1.8V, then the fan has to run at much higher speeds to effectively cool the CPU. The best part is that it is totally adjustable according to my overclocking settings, acceptable noise levels, etc, but it doesn’t require that I constantly monitor CPU temps because the fan speed automatically scales with the CPU temp if it does get hot.

Hopefully others will find this useful,