SUMMARY: Anything but the “razor blade” works well.

Applying thermal grease to get a uniform pattern is an important part of getting the most out of CPU cooling. It used to be that the accepted method was to apply a thin coat using a razor blade of the edge of a credit card. Most performance thermal compounds in use today are lightly bulk loaded thin or wet compounds that spread easily, but a compound that has a bulk loading >90% will not spread using the razor blade technique.

Alternatives to the razor blade have included a number of patterns. To ascertain how effective these are, I applied thermal grease (Tuniq TX2) to a pane of glass and then clamped a second pane over it to simulate heatsink clamping to a CPU’s IHS. It was baked for about ten minutes at 150ºC to accelerate spreading. I tried five different spreading schemes:

The following pic shows these patterns:

After clamping and baking, the following pic shows how the grease patterns fared:

Grease Pattern After Clamp and Bake

The WORST pattern was the razor blade – blame my application technique, but when you think about it, any ridges or gaps in applying grease may result in coverage gaps – a closer view: 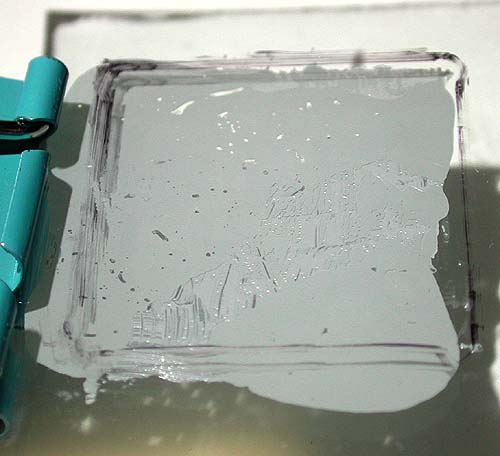 Of the other techniques, all of them will spread nicely over time. I think, however, the best method is to use any technique that starts with grease in the center of the IHS and spreads from there. Personally I believe the best technique is the “pea” approach – this concentrates grease over the hottest point of the IHS (the center) and spreads out uniformly from there. Any excess will be squeezed out.

Forget the razor blade and go for the pea.