SUMMARY: An entry level water cooling system that’s easy to install and adaptable to a wide range of CPUs. Although not as high powered as larger kits, it is a much quieter cooling solution than noisy, high speed fans on air cooled heatsinks.

Jason Hsu at InfiniPro sent me an Aqua Cool Watercooling Kit to test. The kit retails for $88 and the radiator for $62 for a total of $150 for a soup-to-nuts kit. Looking at the size of the tubing and water pump, I was skeptical that it could be used for serious cooling. I’ll review what’s included and then the performance of the kit on some very hot AMD CPUs – a real test of its abilities. 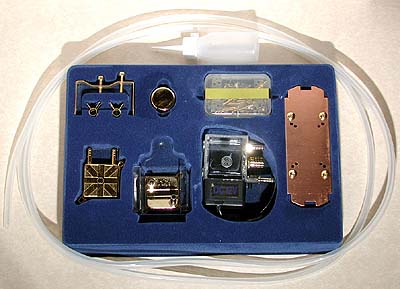 The kit comes in a small plastic briefcase and includes everything you need to hook it up to any CPU you might have – Slot or Socket. Included are 9 feet of 1/4″ tubing, two waterblocks (CPU + VGA), thermal grease, self-contained water pump and enough hardware to adapt to just about any conceivable situation. A 60 page Instruction Manual is included, and although the English may not be Shakespeare, it is better than a lot of others I have seen. 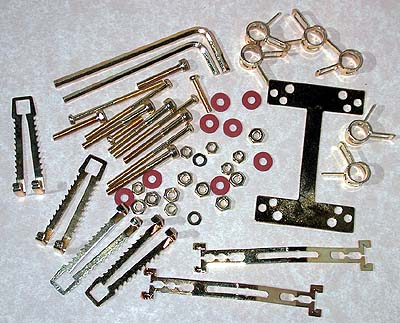 As you can see, the parts included with the kit nicely made and capable of adapting to just about anything you want to engineer; in fact, the Aqua Cool is gold plated for corrosion resistance. The Manual contains LOTS of pictures, and if you want to improvise a clamp, for example, you get some good ideas from the manual. All told, a nice package. 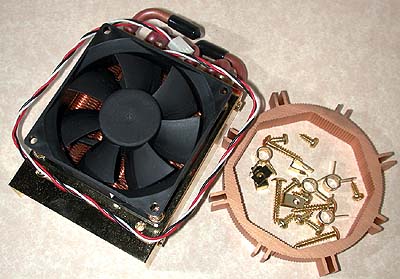 The radiator is about the smallest one I have seen for CPU cooling. It is 5 1/2″ x 3 1/4″ x 2 1/4″ deep. It includes a round mounting bracket that can be used to mount the 80mm fan/radiator to a case. The instructions picture a variety of positions using magnets that come with it. These are not puny magnets – they will hold the fan in place, although I would not use them myself (I don’t like magnets around computers).

The water pump does have 3 magnets glued to it and is effective at holding it in place. However, it will resonate on a metal case and I would prefer to soft mount it with some sound insulation to cut the noise (Aqua Cool tells me they are using a newer pump, although I don’t have one to test). 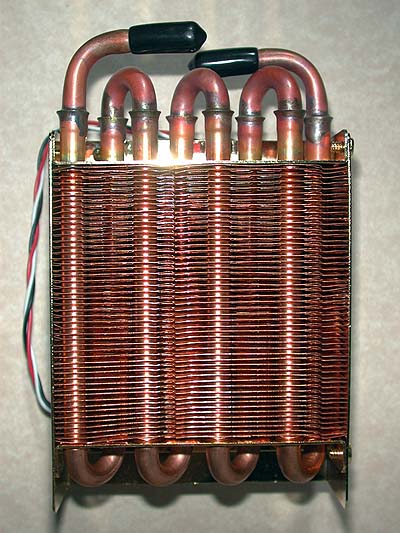 The radiator is not puny – although small, it has a fair amount of surface area and tubing for its size. All in all, the total kit gives you everything you need to get started – no trips to the hardware store are needed to round up a stray clamp. 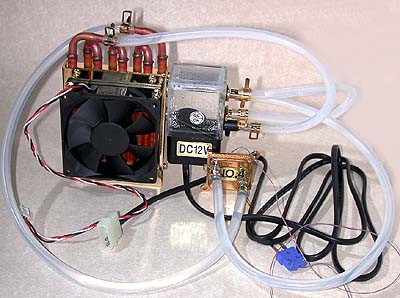 This is what the kit looks like all assembled; took about one hour to set up. The kit comes with a small bottle for adding water (nice touch). I ran the water pump for about three hours to see how it performed. At first, it was a tad noisy (like a loudly ticking clock) but it quieted down to almost a whisper after about six hours. I measured the water flow and it measured out at about 11 gph – not a barn burner by any means.

I also measured the noise at 8″ from the fan and water pump assembly – 63 dBA. This is about as noisy as a YS Tech fan at the same distance, so it’s not even close to an objectionable level. In contrast, a Delta 38 fan at 7000 rpm will be up in the 70s at the same distance. If noise is a concern, this kit is on the low side.

For temperature testing, I cut a groove into the base of the CPU waterblock and epoxied a thermocouple into the groove above the CPU’s core. The thermocouple is attached to an Omega HH23 Digital Thermometer. Ambient temps were measured with a thermocouple placed about 1 inch from the fan’s intake. I used Prime 95 to stress the CPU on an Iwill KK266, running a Duron and T-Birds under stress as a test of its cooling abilities. Arctic Silver grease was used in all tests. 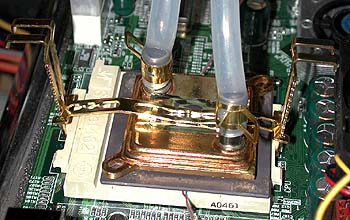 The pic above shows the CPU waterblock on the KK266. Now you look at that and say “You must be kidding!” I was leery of its size and started slowly, running a Duron 800 at 800, 1.6 volts. It did OK, so then I started jacking it up, with the following results:

Well I’ll be damned! As you can see, I got progressively bolder as I monitored results. All tests were run for at least two hours each, so this is not a quickie snapshot.

The Duron is a tougher cooling challenge due to the smaller die size, hence the higher C/W. What surprised me was the way this little guy handled the T-Bird at 1430 MHz – not bad! In fact, impressive! Water cooling is so inherently more efficient that it does not take much to tackle big cooling jobs.

However, Aqua Cool is not up to what a larger water cooling unit will do. For comparison purposes, I ran the T-Bird 1133 @ 1400 MHz using a Danger Den Cooling Cube, Be Cooling waterblock and Danner 1.5 submersible pump: 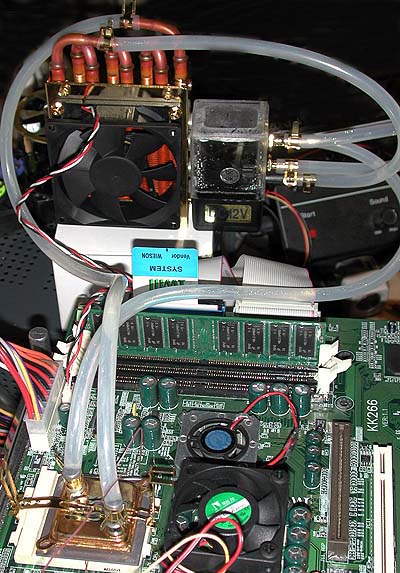 The Aqua Cool on the Iwill.

In practical terms, a larger kit will get you about another 10 C cooler. I would also expect that the larger kit has more “overhead”, so that adding a peltier, for example, to the Aqua Cool is not an option; I think you begin to see that in the increasing T-Bird C/Ws in the first table. A larger kit does take more effort to install, as the radiator is larger and requires case modifications to install it (an example HERE).

The Aqua Cool can be easily installed, although I would hard mount the components rather than use magnets. Although the manual suggests that attaching the radiator to the rear of a case is an option, I’d be leery about knocking it off by mistake. If you mount the radiator to the front of a case, I would strongly suggest cutting an 80mm hole for air flow.

The Aqua Cool’s use of 1/4″ components can be a barrier to upgrading; all the watercooling gear I am familiar with have standardized on 3/8″ or larger. Any upgrade must accommodate smaller tubing, which may make the upgrade a questionable move.

The Business Development in me wonders about product positioning: Aqua Cool can do a credible cooling job on some hefty CPUs with clear benefits as to noise and cooling effectiveness. However, its performance is about on par with the best, noisy air cooling that’s available at far less. Total kit pricing is on par with other larger, more complex kits available that will perform better.

Having said that, however, there is no doubt that Aqua Cool will get you into water cooling quickly, easily and with very little fuss. I could certainly see it as a perfect gift for the budding overclocker or computer nut. Aqua Cool effectively lowers the “fear hurdle” that water cooling seems to engender in some because it’s so “cute”, it’s non-threatening.

If you’re a hard core overclocker looking to add a watercooled peltier, this is not the way to go. If you want better cooling and substantially less noise, the Aqua Cool is an easily installed option that will deliver. If you like cute gadgets, this is a must.

Thanks again to Jason at InfiniPro for sending us the Aqua Cool to test out.

SUMMARY: Watch out copper; here come new waterblocks that can cool CPUs as well as you but at lower costs. Chip Eckert over at Overclock-Watercool sent me three very interesting waterblocks. The first one is a bored out aluminum block