In this story, you will learn how the new, but bad Arcticooler did. As you might know, there was a bad batch of them, but I got a good, working cooler. I also tested the Alpha PAL6035 along with it for comparison, and an FDP32 just because it was lying around. I had to modify the FDP32 to accommodate my celly FCPGA. All I did was put a standard copper cold plate under it. 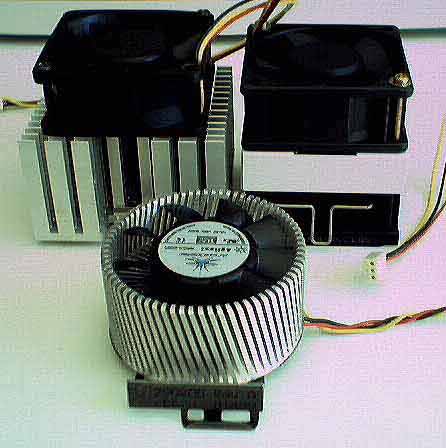 Global Win FDP32, Alpha PAL6035 and the Arcticooler in the front. 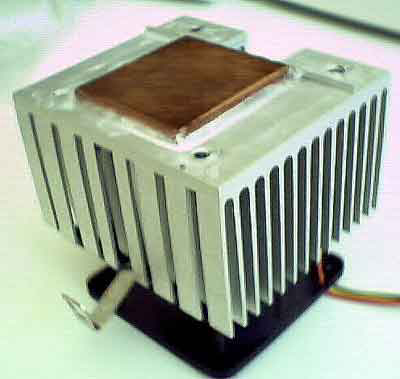 Here’s a diagram of my case fans: 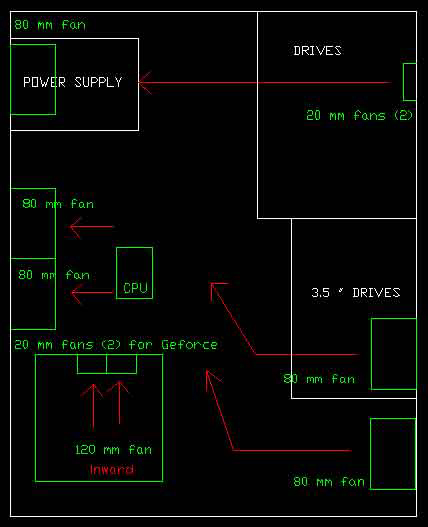 As you can see, there is MAJOR airflow in the case. I will also like to thank my school for…providing AutoCAD.

Alpha PAL 6035
Blowing IN
Blowing OUT

Hmm… Not bad. It did better than I thought it would. As you can see, sucking sucks. My system is designed to get rid of CPU air, so I don’t have to worry about re-circulation. The heatsink was interesting, because the clip makes it hard to put on. I had one heck of a time getting the PAL, but I got it and it was in good condition. Here’s the temps for the Arcticooler from Agilent, the measuring company:

Arcticooler
With PAD
Without PAD

Oddly enough, the CPUIdle loaded temps are better with CPUIdle; that’s why I put them in in the first place. It’s not a significant difference, but it’s there. But the big thing is the thermal pad. The pad is pretty good, but at higher temps, it’s pretty much the same with or without it at no load, but it does show off at higher loads. So… it seems that it can’t keep temps lower than a certain rate, but it can keep high temps down.

I did have some trouble installing it; the Asus slotket had the clip bending downward, making it hard for the cooler to fit in the clips, but I got it in nonetheless.

When I got the Arcticooler, it was a hot day out. I opened up the box and ripped the cooler out of its packing. It was HOT, at least 140-150 degrees. I quickly plugged it into my brother’s computer to lower the temp of the sink. In less than two seconds, the metal was ice cold. Wow.

Next up on the agenda is the FDP32. There’s a reason I kept the supposed paperweight last. The copperplate really did something to it:

So… It blew the competition away.

If you take a look at the high temps, the high load with CPUIdle doesn’t affect the temperature in any way. Also, the copperplate gave the FDP a boost over the others. Unfortunately, its out of production, but if you look hard enough you’ll see some still for sale.

Anyway, even though it performed the best, it’s still big. Very big. Not all motherboards will support it, but if you put the copperplate on, it’ll probably work. If you read the article by Joe (HERE), you’ll notice that the clip on it wasn’t very powerful, thus needing a stronger clip. Right now, the clip I’m using is strong, because there is something else under the sink besides the processor, adding height to the clip. Well, I don’t have another clip anyway.