SUMMARY: A waterpump designed exclusively for PC watercooling – about time! 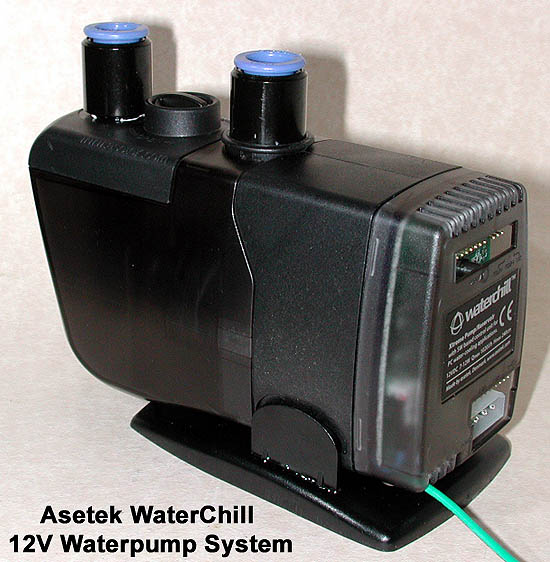 The good guys at Asetek were nice enough to send a sample of their WaterChill 12V Waterpump System to try out. The key word here is “System” – usually manufacturers hype products with overblown ad copy, but in this case it is accurate – this is more than just a stand-alone waterpump.

The key distinction of this waterpump is the control package that comes with it, best visualized with this screen display: 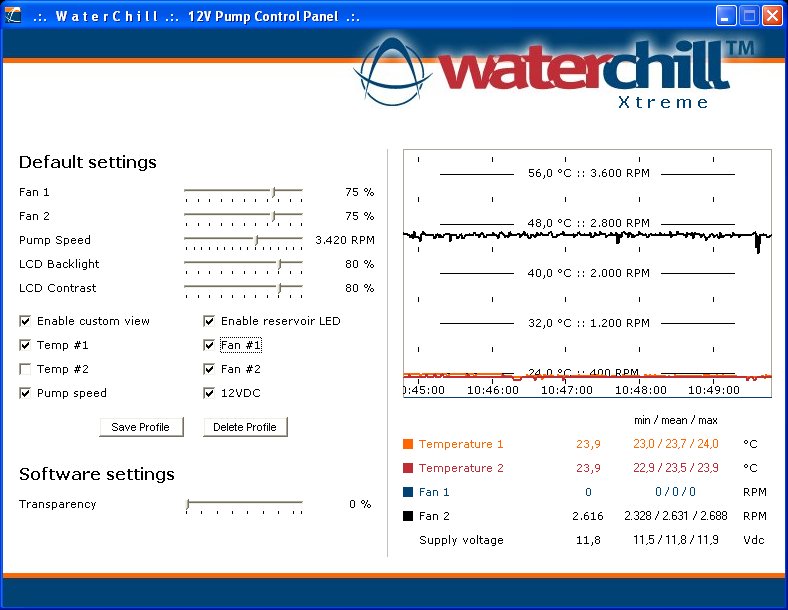 Not your usual waterpump! This waterpump is built around a PCB and controlling software that allows users a number of control and monitoring functions (Note: Windows XP only!):

The waterpump itself looks pretty sleek: 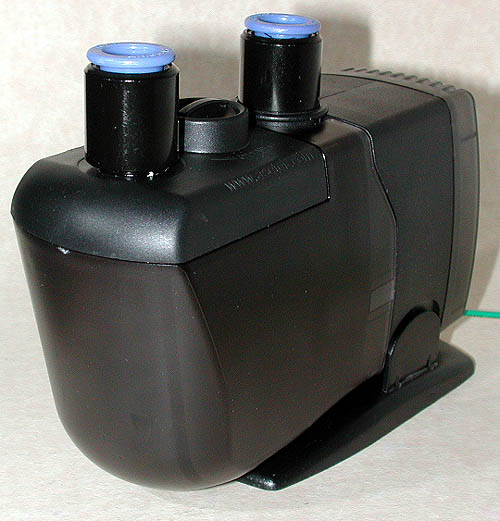 The business end is at the back: 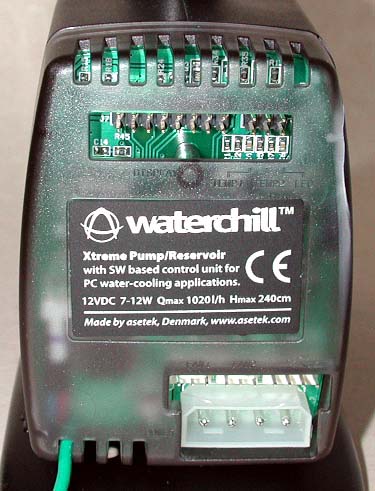 This is where the PCB resides with hook-ups for

The back opens to reveal the PCB: 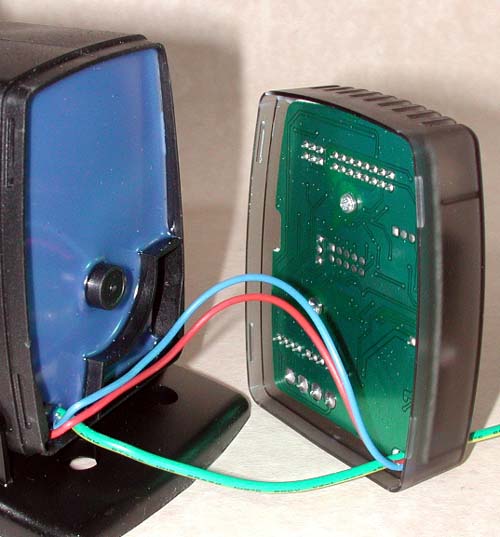 You can change the back with different colored pieces: 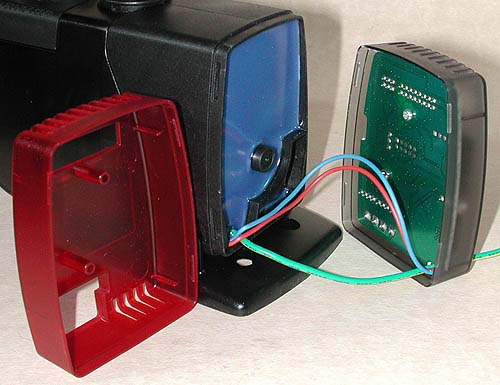 Remove two screws and you replace the backs – the PCB revealed: 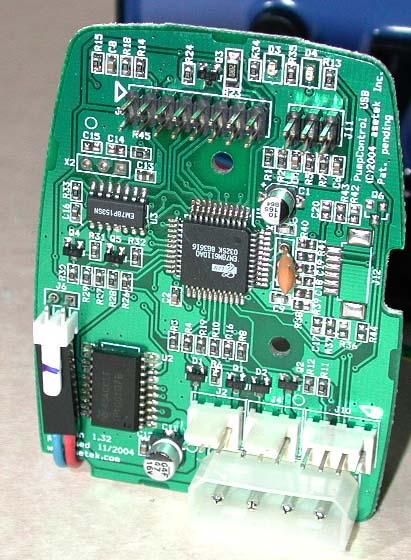 You can also change the reservoir with six different colors 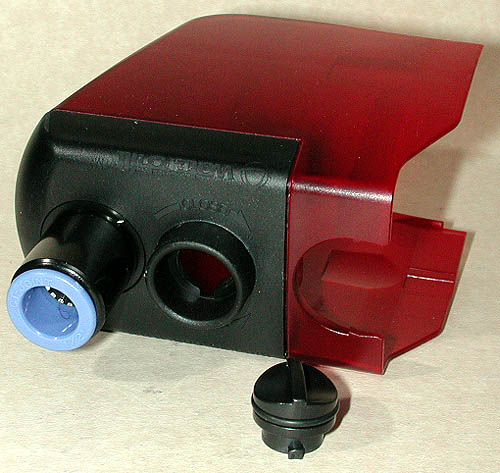 The fill plug is tight and small – I found it difficult to remove. 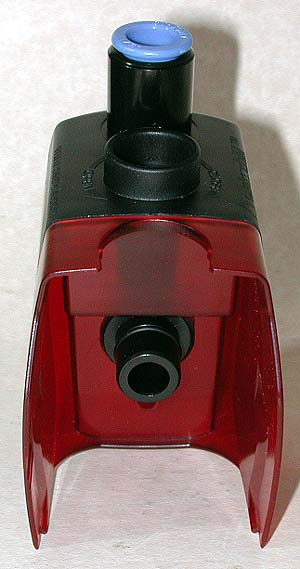 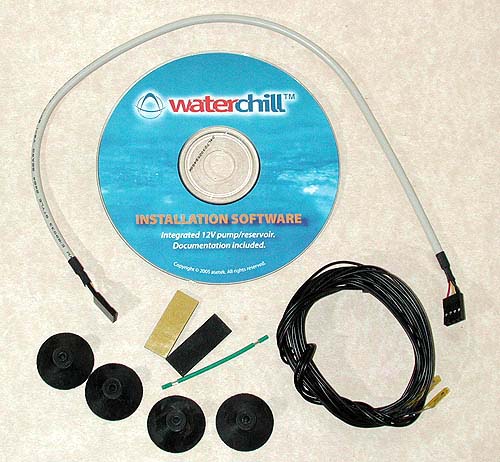 After running the Asetek waterpump for a while, I found the following:

All features worked correctly even though the screen displays for some items were incorrect; I can not test every available USB device, but some may interfere with the unit in ways I did not experience². This version lacks the flexibility to change screen display settings, although a working HELP function might correct this.

Even so, the functionality of Asetek’s WaterChill 12V Waterpump System is very good, although users should recognize its limitations and it’s limited to users with Windows XP.

Asetek responds and fixes the issue on page 3…

Thanks again to Asetek for sending this our way – a very interesting product.

²I received this email from Jonathan about Asetek’s USB issues:

“I’d just like to make you aware of an issue inconveniencing a large number of Asetek’s customers currently. It seems that if you have a Logitech peripheral plugged into any USB port on your system, the ChillControl panel for your Vapochill XE DOESN’T WORK. They’ve been promising an update to the app since May with no results.”

I received the following email from Per Adamsen of Asetek which clarifies the issues I identified in the review:

“As the main programmer of the WaterChill Control Panel I have a few comments to your summary on our new pump. Some of the issues could have been avoided if you had been able to read the manual – but I’m apparently not going to make that an easy task 🙂

1) The System Tray “Help…” should be working. However, after the release of the first version we discovered that if e.g. notepad wasn’t associated with *.1st files the readme.1st file wouldn’t be opened. If this is the problem you encountered you should simply associate *.1st files to notepad? Otherwise you should be able to locate the readme file in the installation dir.

2) The graph min / max values can be changed by right-clicking the mouse while on the graph area. A new window emerges where you can change both min / max y-values and the display interval.

3) Multiple user profiles are available. Doubleclicking the line displaying “Default settings…” enables you to change the name of the profile. Hitting the “Save profile” button saves the profile and adds it to the System Tray menu.

5) The min / mean / max values will be corrected in the upcoming release.

6) The USB pen drive problem seems to puzzle me – I guess using floppy disks are out the question ;-D It’s most likely that the software was reading junk during initialization and registered this junk as a max value. After the first 5 minutes the min/max values should read the correct values since the data buffers are then filled with actual readings instead.

Hopefully, this has shed some light over the bugs you are describing.

Btw. this is not a Hydor pump.

AMD has essentially gotten first silicon out on Clawhammer and demonstrated it at IDF. It’s not up to speed and nowhere near ready yet, which is no big deal for a processor/chipset that isn’t supposed to be out until the

The Inquirer has reported that Bartons are supposed to be “introduced” on February 7. They are supposed to come in 2500+, 2700+ and 3000+ flavors. A few cautionary points: “Introduced” Doesn’t Mean “Available”: I’m sure they’ll have a dog-and-pony show

The last week has had a number of news items: South Korea fines Intel $25 million FTC opens formal probe of Intel chip business Trial for AMD lawsuit against Intel delayed ten months until February 2010 There will no doubt