The good guys at Asetek were nice enough to send their watercooling kit, the Asetek WaterChill, for a test spin. This is Asetek’s first entry into the watercooling market.

Upon unpacking the kit, I took a close look at its major components:

The radiator arrived with the hoses attached: 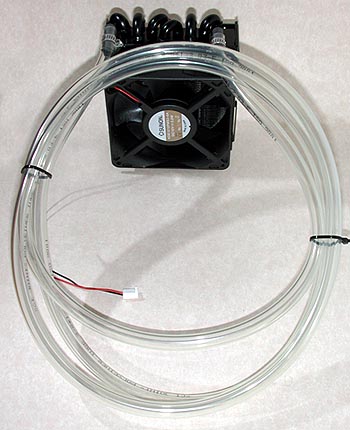 I noted that there were two rubber sleeves on the intake/outake ports to accommodate the attached 3/8″ ID tubing: This is because even though the Radiator’s copper tubing is 3/8″ OD diameter, the intake tubes measured 9/32″ OD. After removing the clamps I found it very difficult to remove the tubing from the radiator – I wound estimating how long I needed each segement and cutting the tubing in place. 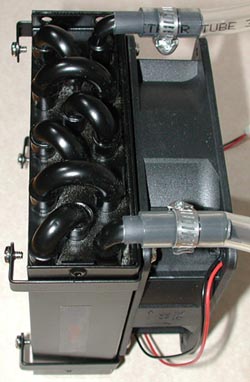 Note also that the radiator is about 1 1/2″ deep. This is due to the staggered tubing design which increases the tubing’s coolign surface area. 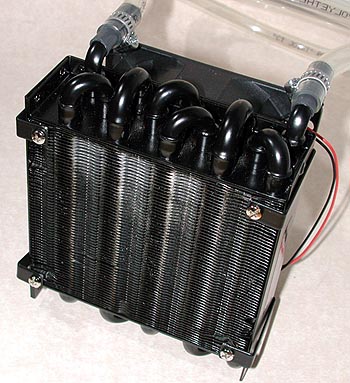 However, the cost is reduced flow through the radiator – each 90 degree turn reduces flow, and there are 12 turns with this design.

The reservoir is a nice design: 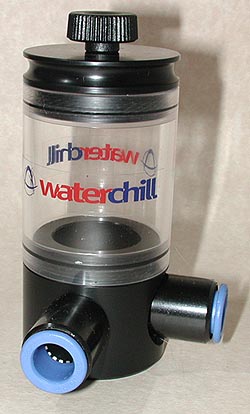 All other tubing fittings are “quick connect” – push the tubing into the fitting and its secure (carefully read the directions on this). The reservoir has a cap the is held in place by rubber “O” rings – there is no way this can slip out by holding it upside down. The knurled knob can act as a vent hole shen bleeding the system.

The pump is a Hydor L20 (test results HERE): 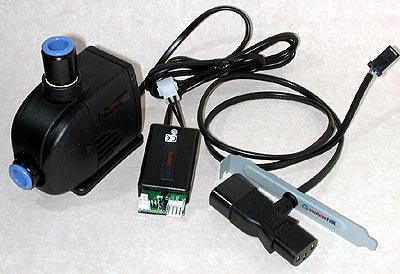 This is rated at 700 lph (0 head). Supplied with the pump is a PCI slot cover that serves to connect an AC 110/240 volt external power source to the pump. The pump is controlled by an external relay which is hooked up to the power supply through a floppy power pin – power up the PC and the pump turns on: 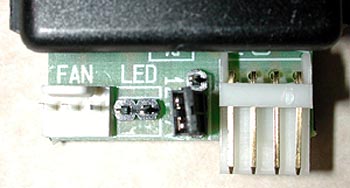 In addition there are plugs for the 120mm fan (7 and 12 volt options) and an optional LED connector – lights up when the system powers up (you supply the LED).

The pump’s front cover slips off: 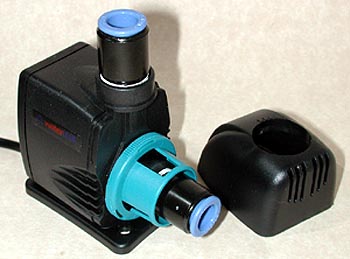 The blue retainer ring secures the pump chamber to the main body – remove it and you can inspect the impeller for wear, etc.
{mospagebreak}

The waterblock features a 3/8″ thick acrylic top bolted to a copper base with four allen bolts: 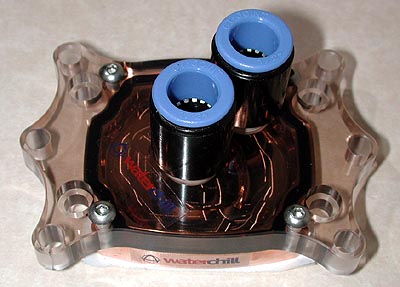 The base of the quick connect fittings used in the system are a bit smaller than the 3/8″ ID of the tubing – they measure 9/32″ at the widest point: 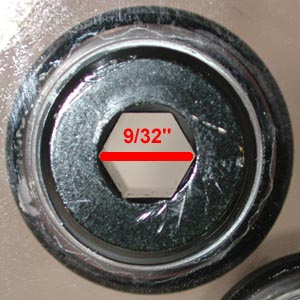 The base features a “half moon” design: 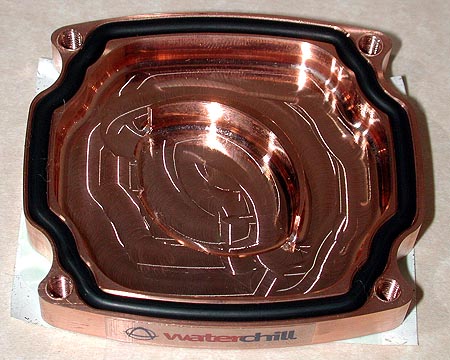 Machined into the base is a semicircular wall located off the to side of the intake nipple. This serves to increase turbulence within the block. The light streaks you see in the picture are machining marks from the cutting tool used to hollow out the base – these are small ridges in the base. 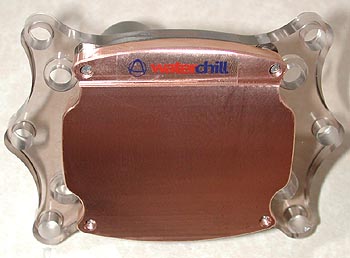 appears well machined – I could feel no ridges.

The parts shipped with the kit include: 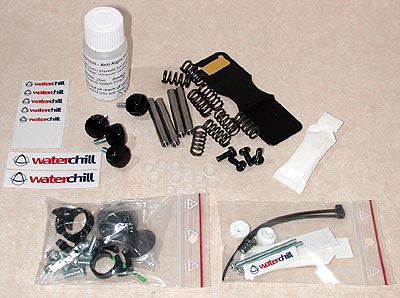 The mnanual is quite good and comprehensive – take the time to read it first, then proceed step by step to install the system. In addition to these parts, Asetek was nice enough to include for testing a Hydor L30 waterpump, 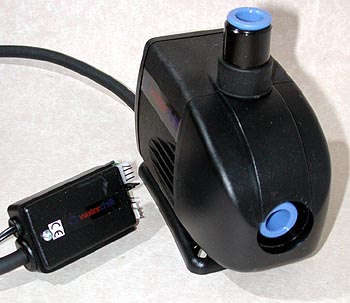 rated at 1200 lph, and their chipset cooler: 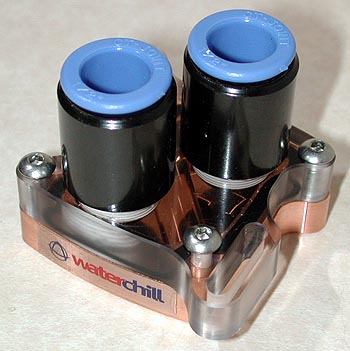 The base, as for the CPU waterblock, is well finished: 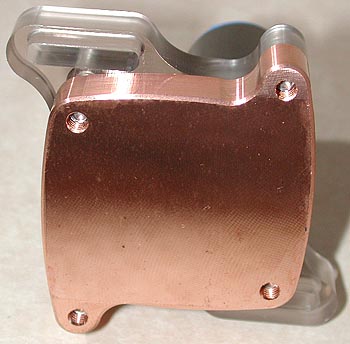 All told, the Asetek WaterChill appears to be a well made kit with enough parts and instructions to fit just about any system. What I also like is that Asetek has been around enough that you have some comfort that they will be there to help if you need it and will stand behind their products.

I feel that system resistance will be a shade on the high side, due to the number of 90 degree turns in the radiator and the slightly smaller internal water passage dimensions due to the nipple’s base.

The waterblock, save for the “half moon” design, is a no-frills approach – no pins or pressure nozzles.

Overall, I would expect to see very good performance but not outstanding.

Asetek was nice enough to include a Hydor L30 to test with the system as well – this gives an opportunity to compare a higher flow pump (1200 lph) and its impact on performance with this system.
{mospagebreak}

The Asetek WaterChill was tested on the CPU Die Simulator which gives results that are unaffected by motherboard influences. I tested using both the Hydor L20 and L30 waterpumps and ran the fan at 7 and 12 volts. Fan rpms were recorded with a digital tachometer.

Results between the Hydor L20 and L30 show little difference – I would conclude that the WaterChill system as configured is just fine with the L20; not all that much is gained with higher flow. Also note that running the WaterChill at 7 volts will degrade performance by about 2 C – for many an acceptable tradeoff if a low noise system is desired.

Considering the difference between running the WaterChill with the L30 at 12 volts and the L20 at 7 volts is only 4 C, the noise/performance tradeoff is quite acceptable.

Asetek’s WaterChill is a very good kit for the money. The Sunon fan was on the loud side at 12 volts and much quieter at 7 volts. Considering overall performance, the Asetek WaterChill is a good choice for those looking for a quality kit.

Thanks again to Asetek for sending this our way.

An Introduction To Extreme Cooling

Want extreme cooling for your PC but already have a heatsink and fans. Cool it down with dry ice, liquid nitrogen, or liquid helium.

Make a silk purse out of a sow’s ear? Joe


BE Cooling Water Block and Fastener

Ok, I’ve tried to keep my head about this. I complained to a few online fellows and have heard similar responses from other people delving into the water cooling arena. I recently purchased a BE Cooling water block from 3DCooling.