Today, ASRock announced its newest addition to the family, the Z77 OC Formula motherboard. ASRock’s high-end Fatal1ty boards geared towards gamers and suited Overclockers quite well, but the introduction of the Z77 OC Formula ushers in a whole new lineup specifically built for Overclockers. In fact, the motherboard was designed by (at least partially) by one of the top clockers in the world, Nick Shih. We give you a preview to tide you over, to give us time to thoroughly test the product and complete our performance review.

The board is rather large, CEB form factor (like dual processor motherboards) to be exact, so I expect it to be jam-packed with features to make any overclocker salivate. ASRock split the features up into three main categories, or kits, perhaps to resemble an aftermarket car turbo kit to mesh with the stunning performance car theme design. Let’s hope what’s under the hood lives up to its good looks. Below is a quick glance at each kit: 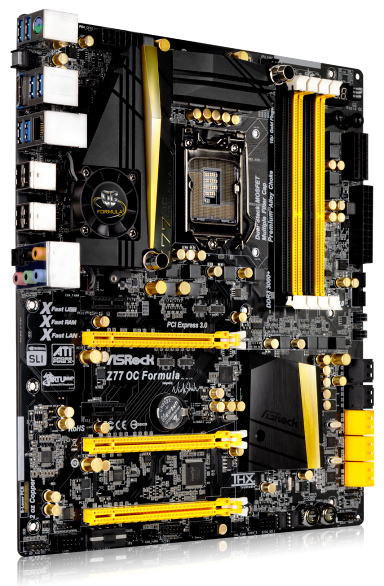 This group of features is designed to provide stable and efficient power to all components, a cornerstone of overclocking. Highlights include:

On paper, these features sound pretty good. Ultimately, with high-end boards like this, it usually comes to down to the actual components used and build-quality of the motherboard. All overclocking boards are built with stable power current in mind, so the only way to assess the validity of ASRock’s claims is to take the OC Z77 Formula for a test drive.

Now we can take a look at a really unique feature that sets this board apart from the competition (although I recall having seen it on a prototype EVGA board at CES in January), Twin-Power Cooling. In a nutshell, the onboard components are cooled by a heatpipe as usual, but plug your water cooling loop in for even stronger performance. I have yet to really give extreme overclocking a go on the Z77 platform, but if it is anything like X79 in terms of heat, cooling motherboard components can actually go a long way in squeezing out those extra few MHz. The motherboard is also kept cool by an 8-layer PCB, with 2 inner copper layers, although I am personally skeptical as to how much this really does. Rounding out the cooling kit is a bonus tube of GELID GC-Extreme Thermal Compound, which is designed with sub-zero cooling in mind.

The Z77 OC Formula features high-density power connectors, which ASRock claims can reduce power loss by up to 23% and decrease temperature up to 22 °C. I was not really aware power connectors could cause such issues while overclocking, but it is definitely something to learn more about once this board gets out to reviewers. Also, the memory slots and CPU socket are made up of 15μgold-inside design or gold pins. I’ve heard of high-quality audio components using gold connectors or wires, so it seems like the same idea is being employed here.

Now that the three main kits are out of the way, there are a few other notable features of this board, including a completely tweaked UEFI. Designed with overclocking in mind, the UEFI offers tons of voltage options, Timing Configurator (for all those memory tweakers out there) and Multi-Thermal Sensor, which provides temperature readings for several different motherboard components. Also included is an option called NickShih’s OC profile. I am not sure what that entails, but ASRock states it “provides a taste of Nick’s secret recipe for overclocking.” Some of us (me, specifically) need all the help we can get! Last, but not least, there are Rapid OC buttons onboard as well as voltage probe areas. 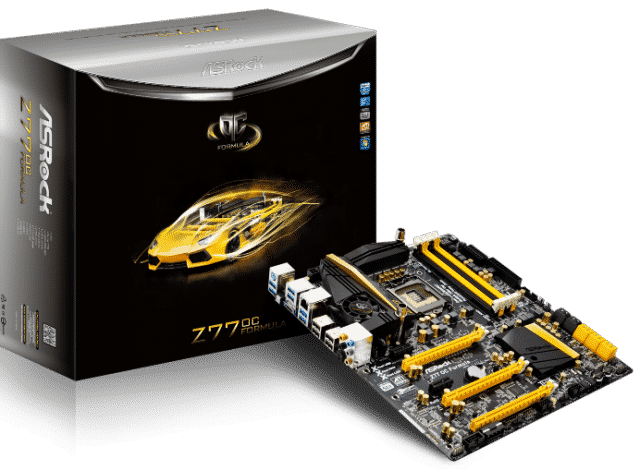 First Take and the Competition

All in all, the OC Z77 Formula has some pretty enticing bells and whistles for overclockers. Even more exciting, in my opinion, is that it looks like this might be the first of many in a long lineup of overclocking boards from ASRock. It’s nice to see them get into the ring with other major players like ASUS, Gigabyte and EVGA to duke it out for overclocking supremacy. More competition means better features, pricing and options for users as the manufacturers battle for market-share. All this spells great things for end-users.

Stay tuned for a review of this board in a couple of weeks!