SUMMARY: In a special to Overclockers.com, Jing Fong (our man in Taiwan) reports on the ASUS – ABIT Merger.

In a stunning, surprise announcement, ABIT and ASUS revealed that they have merged the two companies into a new company called ABSUS. Capping an involved, long, but very secret negotiation process, ABSUS is aimed at serving both the OEM and Consumer markets with dual function products.

“We both feel that this merger will bring forth new products that combine the respective strengths of our companies” a company spokesman stated. “ABSUS will continue to serve the OEM market while, at the same time, provisioning its products with those features most desired by consumers in the performance market.”

As evidence of this new design philosophy, ABSUS unveiled a new motherboard, the ABSUS KA7V133AB. This KT133A motherboard incorporates features designed to satisfy both OEM and Consumer needs (see picture below): 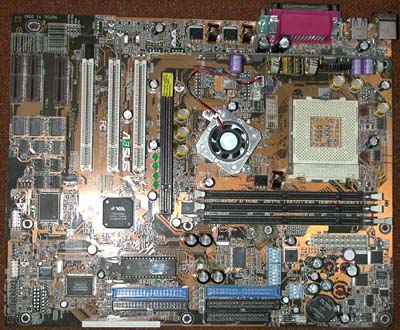 A company engineer stated that all settings are adjustable in BIOS; users merely configure the three dipswitches to OFF settings, enable jumper J10 to “BIOS”, set the VCore jumpers to “Default”, load the special “AB BIOS”, and choose appropriate settings from Column A and B. Users must choose one BIOS setting from Column A and one from Column B – no substitutions allowed.

Sharp eyed readers will notice that the KA7V133AB uses TennMax’s Lasagna chip cooler on the Northbridge chipset. According to one source, inspiration for this came from the combined design committee from ASUS and ABIT while eating at an Italian restaurant. Rumors also have it that the idea for SoftMenu IV’s unique AB arrangement was similarly inspired at another restaurant.

ABSUS is also aggressively pushing AMR technology. Inclusion of multiple AMR slots is a first, and ABSUS has developed a series of AMR connectors for enabling on-board Video and Sound. “AMR is definitely the wave of the future” according to one company insider, “ABSUS will lead the way on this one.”

ABSUS has also designed RAID Version -1 with Promise Technologies; this version allows users to emulate the first set of IDE ports as a second set, using ATA133 technology. If the first set should corrupt, the second set seamlessly becomes the first set. “Redundancy such as this enables both OEMs and Consumers to rest assured that their disk drives will always be current” said one engineer involved with its development. Included with the motherboard is a set of special AB drive cables to enable this feature.

In addition to these design innovations, ABSUS is also giving more attention to RMA policies. In contrast to current policies which involve a payment for returning a defective board, all ABSUS products can be replaced with a new motherboard at no charge. “All a customer has to do is exchange the motherboard at our RMA office in Taiwan” said a company spokesman. Only walk-in RMAs will be allowed.

While final pricing is tentative, the ABSUS KA7V133AB should retail for “at least $200” according to one source. OEMs will pay less – a price of $87.50 is rumored, with quantity discounts starting at two units. When queried on this unique, two tier pricing policy, a company spokesman, Yung Fat Fuul, said that a pricing committee composed of accounting representatives from the two companies designed this structure during an all night session at the Taiwan Hilton’s bar.

ABSUS has embraced the concept of “Dual Design Teaming” to merge the best policies of the two companies into ABSUS. The concept is embraced by a Chinese saying that loosely translates to “Neither Ox nor Horse.” We wish ABSUS well in its future endeavors and look forward to a continuing series of unique products.

There Ought To Be A Law

From an article in PC World: “A small group of PC owners has quietly filed a class action lawsuit against Intel, Gateway, and Hewlett-Packard alleging the companies misled them into believing the Pentium 4 was a superior processor to Intel’s

New Kid On The Block

Update 3/28/01: Most of the criticisms found here are statistical in nature. Due to the nature of what’s being done here, this opens up the possibility of more accurate analysis that simply has not been possible with a user-based database.

The differences between prices on high-end and low-end Intel chips have never been closer. There’s less room for profit in remarking than ever before. And NOW all of a sudden remarkers crawl out of the woodwork and are all over