With the pending release of the new NVIDIA 900 series graphics cards, ASUS will offer two new video cards from their STRIX line at launch. Based on the NVIDIA GM204 Maxwell GPU, these cards will feature the ASUS proprietary DirectCU II cooler with 0dB fan technology, be factory overclocked, and come with 4 GB of GDDR5 vRAM. Below is the press release we received from ASUS today. 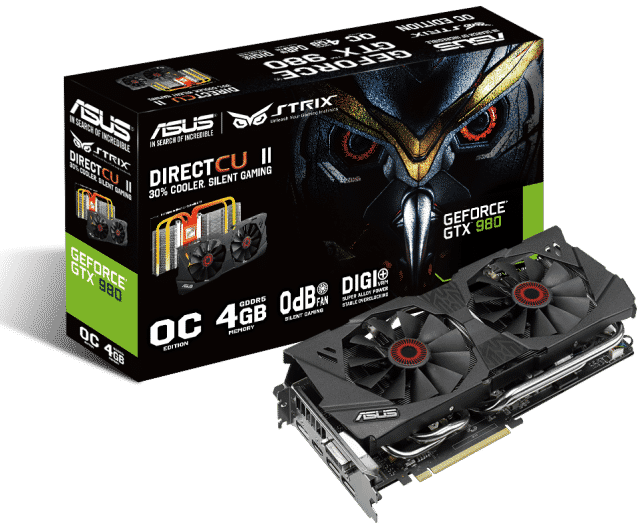 Play League of Legends® and StarCraft® in silence!

The STRIX GTX 980 and STRIX GTX 970 both come with the ASUS-exclusive DirectCU II cooling technology. With a 10mm a heatpipe to transport heat away from the GPU core, operating temperatures are 30% cooler and 3X quieter than reference designs. Efficient cooling and lower operating temperatures allow STRIX graphics cards to incorporate an intelligent fan-stop mode that can handle games such as League of Legends[1] and StarCraft[1]passively, making both cards ideal for gamers that prefer high-performance, low-noise PCs.

The STRIX GTX 980 and STRIX GTX 970 come with GPU Tweak, an exclusive ASUS tool that enables users to squeeze the very best performance from their graphics card. GPU Tweak provides the ability to finely control GPU speeds, voltages and video memory clock speeds in real time, so overclocking is easy and can be carried out with high confidence.

GPU Tweak also includes a streaming tool that lets users share on-screen action over the internet in real time, meaning others can watch live as games are played. It is even possible to add a title to the streaming window along with scrolling text, pictures and webcam images.

Are these new Maxwell based graphics cards going to be the new king in PC gaming? We should be receiving a review sample or two, so we’ll certainly be finding out soon enough.

Today we’re going to look at another NVIDIA GTX 670 card, this time by ASUS – their GTX 670 DirectCU II TOP. While the name is long and a bit cumbersome, the card is sleek and fast. So grab a cold one, sit back and enjoy the show.

With CES 2021 ramping up this week, we are seeing lots of new releases including the array of six new Z590 motherboards from ASUS. You’ll see support for new Rocket Lake processors from familiar faces like ROG, TUF, and Prime. Check out the press release from ASUS Blog below for more details on the full lineup.

With the release of Intel’s Skylake “K” series CPUs, today also brings the release of Z170 chipset motherboards from various manufacturers. One such release is the ASUS Z170-Deluxe, which we’ll take a good look at today. Sitting at or near the top of the ASUS Channel series motherboards, the Z170-Deluxe is packed with a ton of unique features that take full advantage of this new platform.

Can the fanless mode be disabled for those who prefer lower temperatures while running GPGPU apps?

Didn't the MSI version review better, Brando, or was that just the 970?

actually now i'm thinking about evga. the new acx cooler is supposed to be better but i can't find anything about the pcb. one of the great things about asus non reference cards is the upgraded components. no weird squealing noises! come to think of it i don't even know if the strix has custom pcb. hang on double checking lol.

I don't care too much if another brand gets another 20mhz max oc or whatever. asus dcu2 cards have served me well and don't squeal when i play games. what's the point of getting a card with a fancy cooler if it still sounds annoying? plus apparently evga doesn't have lifetime warranties anymore. i must have missed the meeting. bummer. anyways i was almost considering getting a 780 strix just for the silence and then this came out so great!

actually now i'm thinking about evga. the new acx cooler is supposed to be better but i can't find anything about the pcb. one of the great things about asus non reference cards is the upgraded components. no weird squealing noises! come to think of it i don't even know if the strix has custom pcb. hang on double checking lol.

EVGA are all reference or near reference cards with option to get SC/FTW with higher clock and ACX cooler. Except slightly higher clocks and different cooler all their cards are so far the same. I bet that the same as with 700 series only Classified will be fully non-reference but it will take some time till they release them ( or we will see it in 980Ti only ).

I'm not sure what about ASUS GTX980 but GTX970 is kinda weak. I mean only 1x8 pin power connector what gives max 225W and in most reviews OC results are lower than the competition. For comparison MSI has 6+8 power connectors ( 300W max ) and fully non-reference design. Gigabyte the same but probably 1 phase for memory more.
I wanted ASUS but after what I saw in various tests and reviews I'm not convinced at all. I won't pick MSI because of warranty stickers and I won't pick EVGA as their cards are just like reference with standard power section etc. I will think about Gigabyte and maybe Zotac Extreme if they will be available soon. Galax is not available in local stores and other brands are not even worth to mention.

Lifetime warranty means ( if it's not clearly said otherwise ) that they will replace/fix it till about 1-2 years after end of manufacture what means about 3-4 year warranty. Simply 3 or 5 year warranty is almost always better than lifetime but all depends from manufacturer. Gamers are changing gfx cards more often anyway so I would care more to not see my card in RMA at all during the warranty period.

it's probably the single plug on the 970 that does it. whoever thought that was a good idea needs to be demoted to janitor. i can't speak for everyone but i couldn't care less about only needing one plug. if a power supply has an 8pin vga plug at all it's almost certain to have another one i would think. i bet the 980 oc's just fine but i'll wait to see of course. as far as warranty i guess it's not just the length for me but the quality of customer service. i just have a feeling that if something goes wrong with evga they would take care of it painlessly but everyone swears asus warranties make you want to kill yourself. i haven't had to use one yet fortunately. if i have to choose between quality and warranty i'll take quality.

GTX980 is like GTX680. One more time the same story. It's not the top series but it cost like one and in maybe 2-3 months will be big drop in prices while GTX970 won't be much cheaper.
When you have GTX780 then I see no point to change card for gaming unless you are using 2-3 monitors above 1080p. FPS gain looks better in % but if you compare it in games then it's like 70 vs 80 or something. It doesn't change much as in both cases all will run good.
I will grab GTX970 when they will be available in local stores just because I see they have high OC potential and I can replace GTX780 1:1 ( already sold it ). I'm not playing much and my daily PC for gaming has GTX580 what is enough for everything I need.

i play at 1440p. in bf4 on ultra settings it usually stays around 60fps+ but somehow it still feels like it slows enough during really heavy action to throw my reflexes off a bit. mainly when there are lots of players and tons of smoke/flares/explosions at once. if i'm going to have a nice pc i want to really do it right and make sure i have all settings high with no issues. turning down graphics hurts my soul.

ok i know somebody has some strix 970's out there. let's see some max oc numbers. i need to know. been contemplating dual strix 970 sli. the single 8 pin shouldn't be a big deal if these things are such power sippers.