Before I ordered my ASUS P3V4X motherboard, I researched a lot about
motherboards…probably not enough. First I bought a SuperMicro i820-based motherboard (PIIISCA). Before UPS could deliver the motherboard, I had done more research and found out that the memory performance pretty much stank; not just for the SuperMicro
board, but i820 boards in general. The entire reason I ordered the i820 was because it accepted regular SDRAM as well as RDRAM.

Well, RDRAM costs more than college so I figured I’d just slap my old PC100 on it and wait for the prices to fall. Memory bandwidth on Intel i820 chipset-based motherboards with SDRAM is extremely poor because it has to go through a Memory Translator Hub (MTH). UPS delivered the motherboard and I sent it right back.

The next motherboard? The ASUS P3V4X! What an A-W-E-S-O-M-E motherboard! This board has everything and a bag of chips. All the reviews of the 133a chipset I read mentioned that it supported a new SDRAM called "Virtual Channel
Memory" or VCM for short. NEC makes VCM and at the time of this
writing, Kingston is the only manufacturer who has VCM for sale. All the articles I read about VCM stated that it was far superior to regular SDRAM. So I got some. Here is a picture of the label: 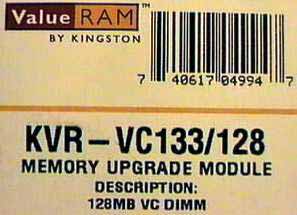 Constantly I see respected hardware review sites attempt to compare the new 133a chipset to the aged Intel BX chipset and boldly state that the 133a chipset has "terrible" memory bandwidth. Each time I’ve confronted those sites, they "cop out" saying that they didn’t actually test some VCM for themselves but they "heard" it wasn’t worth the silicon it was made of.

Well, I’ve compared this memory to other high-quality PC133 SDRAMs and it performs well. Here are some Sandra 2000 benchmarks on the P3V4X. Each of the benchmarks below was performed at memory settings of (2-2-2-5) except for those marked with a special *. Kingston’s VCM memory performed F-L-A-W-L-E-S-S-L-Y at 155 MHz at those memory settings. What is interesting to note is that VCM memory would not successfully boot into Windows above 155 no matter what the memory timings were set to.

It should be painfully obvious that Kingston’s Virtual Channel Memory is seriously putting the "hurt" on Mushkin’s HSDRAM all the way up to 155 MHz. After 155, however, the Kingston RAM won’t handle the clock speed no matter what memory and I/O voltage settings I threw at it. Another curious observation is that the HSDRAM’s CPU/FPU ratio was much higher than that of the VCM.

What does that mean? Well, it probably doesn’t mean too much other than applications (or games) that are memory intensive and do a lot of floating-point math are going to get about an 11% memory performance boost by using the HSDRAM. Then again, this could just be mathematics playing a cruel joke on us! Even so, VCM will still outperform the HSDRAM on an Apollo Pro 133a
chipset-based motherboard.

And now for the BX-lovers… I would love to get my hands on some more PC133 memory sticks… and I will soon. As for the most awesome PC133 on the planet (HSDRAM) compared to some generic PC100, there doesn’t seem to be much difference in raw memory bandwidth. You can even see that the generic PC100 pulled a "Rocky" and took the 120 MHz round by a decent margin.

Mushkin’s HSDRAM is far superior to the PC100 as you can see that it performed as high as I could take it (see the P3V4X chart for the 160 MHz score). I was tired so I didn’t test the HSDRAM at 115 which would have caused me to swap memories once again. That score will be in an update.

I have quite a bit more data that is not shown here for brevity…I know…too late. I’ll try to make something meaningful from that data soon.

I’d like to thank Dan Edgar of Overclockers.com
for his initial HSDRAM scores on the ASUS P3V4X which prompted me to order some. His setup uses two 128MB sticks of Enhanced Memory Systems HSDRAM. It’s a truly amazing system!

And here’s a big fat picture/chart for you modem users. This HSDRAM really rocks! You’ll notice that the BX/HSDRAM combination is a clear winner. I do not have any data (yet) for generic PC133 or even high quality PC133 memory so I can’t say if it will be able to post these kinds of scores… that will be coming soon. 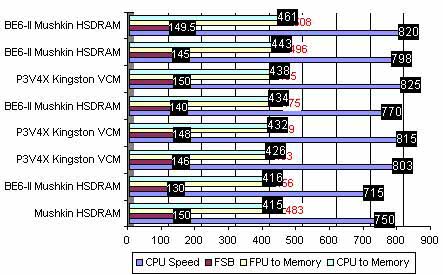 IF the BE6-II had a +33% memory setting, it would be really nice for those of you who are restricted to FSB speed <= 120 and it would (probably) be unbeatable; except up against VCM on an Apollo chipset. The HSDRAM seemed to run extremely well at 3-2-2-6 RAM timings but couldn’t keep up with the VCM at high FSB speeds at the 2-2-2-5 RAM timings… "keep up" meaning it wouldn’t even make it into Windows without crashing. VCM, on the other hand, ran great up to 155 at 2-2-2-5 but wouldn’t go any higher no matter what the RAM timings were set to.

Why Does The A7V Boot So Slowly?

What a PCI IDE or RAID controller essentially does is fool the motherboard into thinking it’s some sort of SCSI device. SCSI devices need some time to look around and figure out what’s attached to it, even if there’s only

ABIT KT7A: Should You Do DDR?

UPDATE 2/5/01: I realized my AGP video card was dying on me and causing instability at 150 MHz. I swapped it out for a cheap PCI card, and much to my surprise I got the board up to 155MHz! The

Part One: Upgrading The Asus P2B is one of the most popular 440BX based Slot 1 motherboards around. Originally the P2B was designed to be used with the Slot 1 Intel PII and early PIII Katmai CPUs. Although the newer