I was looking at your site about overclocking and focused on the diode method of measuring heat for CPU’s. I’m an Infrared imaging technician based in Minneapolis, MN, and was wondering if there would be any interest in some infrared thermograms showing the actual temperature variations on a motherboard.

Here are 2 IR images taken of my Asus SP97-V Socket 7 board running a Pentium P233MMX, 128MB RAM, Vision S-3 video, AHA-2940U2W and AWE32 soundcard. The lighter areas in the thermograms indicate heat, with the lightest areas being the hottest. Both images were taken using a Windows NT4 workstation along with Soundforge 4.5 doing a file conversion of the same file to be consistent. 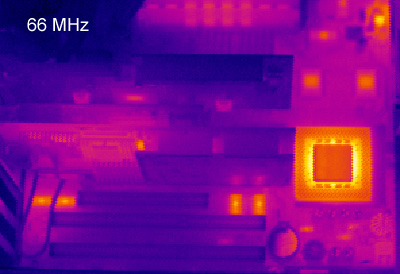 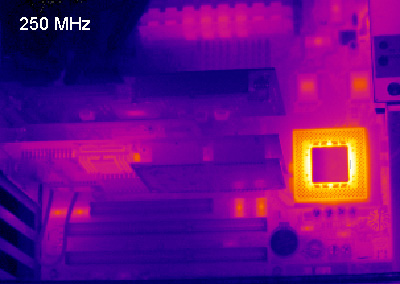 The heat pattern around the copper chip cap indicates the MMX chip with its “sandwich” design leaves a lot to be desired in terms of real cooling. The copper hat is rather cool with the majority of the heat being dissipated through the laminated carrier.

If you know of anyone in the Minneapolis/St Paul Minnesota area with a PII or better who would volunteer their system for some infrared imaging, feel free to contact me by email. I would perform the service for free however I cannot involve the company in this.

[NOTE: These are really interesting and it would be a great service if someone close to Zachary could drop him a line and do some thermal imaging for the rest of us. Of particular interest would be the heat pattern in a PII or PIII’s CPU and cache chips – Joe]

Hi, I’m Nasdak from France. You might want to show this on your site. Xtreme cooling (and Xtreme noise)! I used my vacuum cleaner on my PAL6035. Results : 50 deg on Tbird [email protected] full charge 1.90 V . .

SUMMARY: Intel embraces the GPU overclocking market – how well remains to be seen. This Inquirer article caught my eye: Overclocking capabilities are a main feature of Intel’s 4 series chip set “Intel used to lock down its chips to

Just What Do You Do With All This Space?

Among other things, I’m looking for some new hard drives. I’m particularly looking at the Western Digital drives with 8Mb cache. There’s only one problem: What am I going to do with all that space? (OK, I can buy the