If you don’t Water Cool

You are dismissed to go read other things, like how Semprons will one day rule the universe, or how LED bejeweled accessories really define your overclocking accomplishments.

Those of you still seated, welcome to the lunatic fringe.

Though I’m certain that I am not the first person to stumble onto this, I have not seen it spoken of in the OCForums or here on the front page, so I thought I’d pass it along.

I recently finished a two week stint experimenting with a water block design that left me in a quandary over perceived mounting issues.

Every time I remove a block from its mount on my motherboard, I always pause to examine the thermal grease displacement pattern – it’s more revealing than your typical tealeaf or goat entrails reading. I saw a pattern emerging where the grease was displaced more on the lower half of the core surface than the top half. It was a small difference, but a difference all the same. I was concerned that I was not achieving optimal heat transfer under that circumstance, or worse, placing uneven pressure (mechanical stress) on the fragile core. Even my quality finished, commercially made, control block was experiencing this phenomena.

Initially, I suspected the cause was the fact that the A64 employs only two mounting holes as opposed to say, the Socket A, with its four mounting holes. This wasn’t unfounded, given the fact that two holes only provided a single axis attitude control when paired with the small supporting area of an exposed core. Countless experiments with gimbal type mounting mods and pressure equalization shimming yielded no change in result though.

Last night, as I sat there numbly staring at my mounted block, my attention was drawn to the ZIF socket cam block peeking around the top of the waterblock. For the uninformed, the cam block is the one end of the ZIF socket where the locking lever goes in: 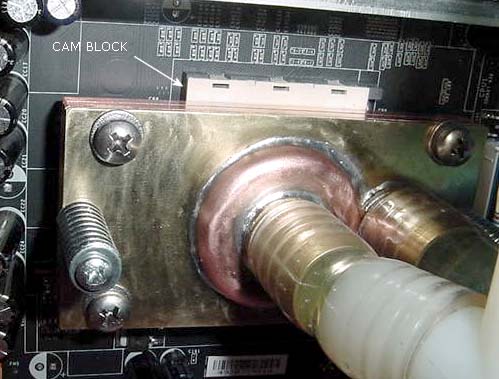 In one of those moments of revelation, I tore a small strip of paper off and tried to slide it between the face of my water block and the cam block. No Go! Hmmm…Click…Whir…

I removed the block, went upstairs and rummaged around for a piece of rice (real thin) paper. I held a strip of it over the cam block while I tightened the waterblock mounting screws. I tugged on it and it was stuck tight. Upon removing the block, the rice paper had “SOCKET 939” boldly embossed into it. I sprang into action. I cut a sheet of 220 grit wet-or-dry into small strips and wrapped a strip around a piece of one half inch square wood stock.

I began sanding down the top of the cam block. Several strips later and after an in-depth vacuuming session I repeated the rice paper process. It was not embossed, but still pinched snugly. I repeated the process until a strip of regular paper would slide effortlessly between the top of the cam block and the face of the waterblock. I applied some dielectric grease to the core, remounted my waterblock and upon removing it, the grease was evenly displaced. Eureka! I got the same result with the commercially made control block.

Okay, I got everything cleaned up, degreased, new thermal grease applied and remounted. Upon firing up my system, I was rewarded to see the core temperature, as reported in the BIOS, to be 1ºC lower than previous readings and that was even before the AS5 had a chance to “settle in”. Given my concerns with the way the thermal diode is read by my MSI K8N Neo2 Platinum, I haven’t gotten all warm and fuzzy over a ~1ºC temperature change, but that’s not as rewarding as knowing that I’m not mechanically over-stressing the core of an expensive CPU. After running Prime95 Torture for a day and a half, the temperature has dropped ~2.5ºC.

I don’t have any air-cooled HSFs for an A64, so I don’t know if they have the base face relieved in the area of the cam block like the older Socket A ones did, so I can’t speak for them. I know from experience that different motherboard manufacturers use different sockets and perhaps this problem is unique to my particular board, but I somehow doubt it.

The bottom line is, A64 cooling devices, whether air or water based, are designed to mount with the IHS in place.

The IHS makes the CPU height great enough that clearing the cam block is a non-issue. With the IHS removed, all bets are off. In case you’re not getting this, here is a diagram (not to scale) that emphasizes what I think is the issue. 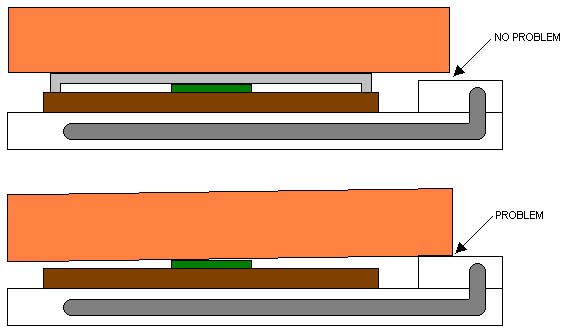 If you’re one of the lunatic fringe who removed your IHS and were non-plussed with the result, try the paper strip test the next time you have the cover off. You could gain some cooling performance and possibly avoid damaging your investment.

Say hello to the Physics Processing Unit. The core concept behind this is that you’re better off in a game having dedicated silicon handle the physics calculations required to simulate grass swaying or bullets hitting, etc., etc., etc. While one

To a large extent, I will be repeating some things I’ve said in the past, but some things bear repeating. In one sentence, over the next number of years, the true pace of improvement will be determined not by silicon,

A “New” Processor From AMD

We’ve talked about Intel’s Atom and nVidia’s Tegra (there’s also the Via Nano) processors and why they’re important as precursors to the tinyCPUs running the tinyPCs in the decade ahead. We’ve also wondered where AMD was in all this. Well,