SUMMARY: Put away your pencils – AMD’s “Golden Pits” on the XP made the multiplier fix a lot harder. 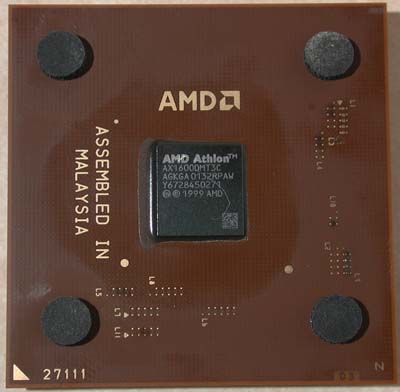 This is it in all its glory – lots of bridges compared to T-Birds.

This shows the L1/L3 “pits” that are dug by laser into the CPU’s ceramic carrier. Normally the pits are dark, as shown by the two L3 pits. If you carefully scrape the dark area, the gold contacts are uncovered. 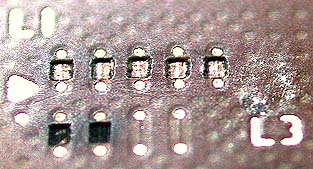 This is a shot with the flash set at a low angle to show the pit’s depth.

We are literally playing with this now. We’re using rear window defogger paint to do this and it’s not easy. We’re seeing posts in the Forum by others that indicate it may take 2 or 3 applications to get the dots connected.

Our first shot at it got it up to 11X133 – others are having the same experience, so we’re in good company!

He then tried the chip on the MSI K7Master with BIOS revision 1.3, but this board now just functions for a little while before dying, which it did with this processor, too.

We did run it on Iwill’s KK266+ – it booted up at spec speed, although the BIOS did not identify it as an XP. We could vary the voltage no problem, but not the multipliers. For the first run, we varied FSBs up to 166 MHz. No stability testing yet, just playing.

We have tried closing the L1s, and the CPU now boots at 11 rather than 10.5 but that’s it. We suspect this is a BIOS issue – we’re going to play with this thing some more and see what we can do with it.

I ran some quick benchmarks and found them interesting when compared to a T-Bird at the same speed. Please note, though, that this was on a motherboard that was not recognizing
the XP as an XP, and thus no SSE enhancements, etc. (We’re looking to buy the Epox 8KHA+ for some serious testing).

Looks like the XP is a definite improvement over the T-Bird, but let’s face it – for most of us, we’re not going to see the change on screen. For those of you into image processing, the XP will show performance gains.

Cooling is a tad easier with the XP – at 1400, the T-Bird radiates 72 watts compared to the XP at 63 watts. A little easier, but not even close to Intel’s ice cubes.

We’ll continue to play around with it and see what we can do.

Give Deneb A Chance

People have had some time to play with the i7s a bit and figure out the various voltages and multipliers and relationships between them all needed to make them purr.

AMD: We’re Getting Coal For Christmas

They just announced that they expect revenues to be down 25% from last quarter, when you’d normally expect an increase of 10% of more.

Intel officially launches the new “Lynnfield” CPU series and the results look like a love-fest.