Finally, I made my decision to go get a Radeon. Now let me tell you that the system I am using at present is an old PIII @450 MHz, o/c to 558 MHz on an Intel 440 Bx motherboard equipped with 128 megabyte 100 MHz ram. So results for my Radeon were obviously not what I was looking for as the CPU was not fast enough (I have heard that 700 MHz+ are best for these Radeons). Anyway I wanted to see what was the maximum MHz I could get from it.

First of all, I would like to tell you that the market here in Saudi Arabia is really really low tech, say not even a quarter of the market in U.S. This means no cooling kits – no nothing! (I was amazed I found this card here). So the point is that I had to be innovative and use my mind and some techniques.

So what did I do?

Well I got two CPU heatsinks and had one cut in 4 equal
parts to make the ramsinks. The second one had its two sides cut to
form a heat sink which was fit for the GPU. I sprayed them to form that
chrome color. 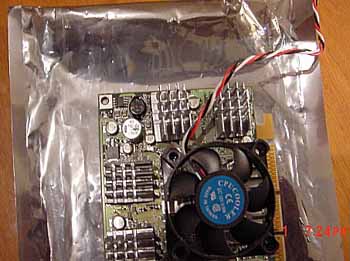 To remove the stock heatsink, I placed the card in its anti-static bag and placed it in the freezer for 15 minutes. And then it easily came off – no strength put in, no danger of breaking your card. Then using epoxy, I cemented the sinks to their respective locations. The fan was also fixed on the GPU heatsink. I had a problem about one ramsink being a
link between the capacitors, but then after consulting I found out it was no big deal. 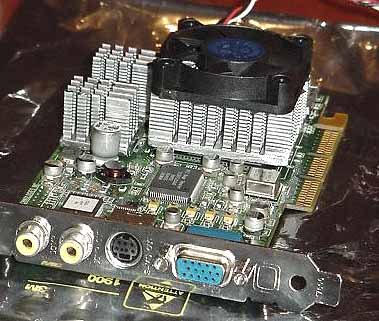 Using the latest drivers from Ati, Direct x 8.a and Rage3d tweak 2.5, I had this baby go up to 233/215 MHz. But bear it in mind that my Riva TnT2 driver files were still roaming on the hard disk. My card was rock stable – no artifacts or anything unusual.

The main objective was the cooling for the card, which was done well. I’ll post my 3d Mark results in about a month. Yeah, I know a lot is gonna’ change in a month, but hey – until my card is giving me great fps and quality, that’s all I need.

By the way, you Nvidia fans tell me one thing: Use your brain for what I am gonna’ say. Now, the Radeon 256 is perhaps a bit slow compared to the GeForce 2. But hey, if Radeon 256 can compete with GeForce 2, then Radeon 2 is most certainly going to be a good competition for GeForce 3.

And now that Ati has stepped into this field, I believe in some months time the 3d market is going to change a lot. Radeon rocks man, I don’t care what 3DMark says. I believe in what I see.

UPDATE 4/11/01: TennMax was not thrilled with the test results, so I retested the Lasagna and Stock heatsinks using a different method: For this test, I milled a small groove in the base of each heatsink; the concern I had