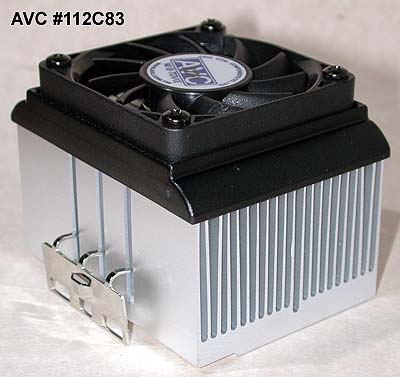 The good folks at AVC were nice enough to send a sample of their OEM heatsink, the AVC Part #112C83 (note: The link shows a 15mm fan). This is listed as an OEM heatsink – basically, a price item.

The copper plug is well finished: 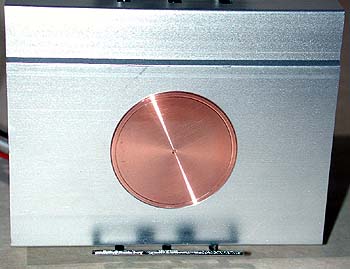 When I ran my nail over it, I could not feel or hear any ridges. The clip is a good one – engages all three socket lugs – although considering it’s a light-weight heatsink, it borders on overkill. However, I’m sure you could drop a PC off a building with this heatsink and it would not come off. You must use a screwdriver to mount it.

In summary, a aluminum heatsink with a copper plug insert with a very secure clip – low noise.

The AVC #112C83 was first tested on the CPU Die Simulator which gives results that are unaffected by motherboard influences. I then tested it on a Shuttle AK31, modified to read AMD’s on-die diode, as an example of what users might see on their systems.

About what you’d expect – maybe OK for mom, or maybe grandma.