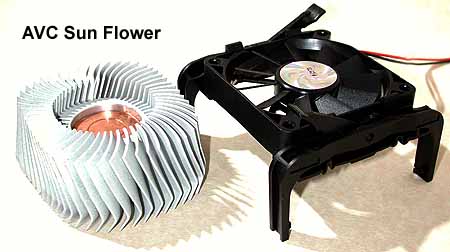 AVC was kind enough to send me a sample of their PIV heatsink, the AVC Sun Flower (part # 117140). What caught my eye when I saw this design was the angled fin structure 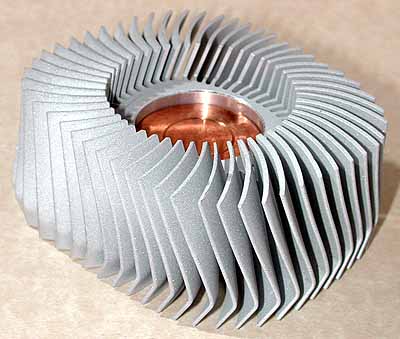 as this pic clearly shows.

Air comes off a fan’s blades at about a 45 degree angle. Fins that are angled to accept air at an angle are more effective than straight fins. Another way to straighten airflow off the fan is to incorporate vanes into the fan’s base to straighten flow – Delta uses this technique.

By designing a heatsink such that the fins conform to the airflow’s path off the blades, flow through the fins are maximized (although I don’t know why the bottom of the fins are reverse angled – maybe to enhance turbulence?). AVC incorporates this into its design by angling its fins

as shown in this pic. Looking down into the heatsink 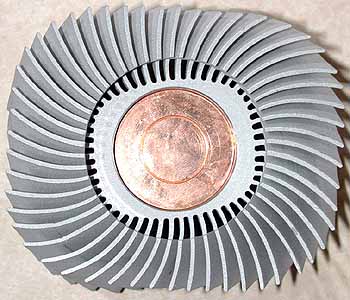 also shows how the fins conform to the circular airflow off the fan’s blades. 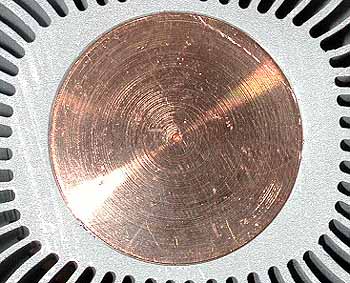 shows the copper plug surrounded by the aluminum fins. Quality control is important, as the thermal efficiency of this design depends upon a close fit between the copper core and aluminum fins. Note that the plug does not contact all of the PIV’s top plate: 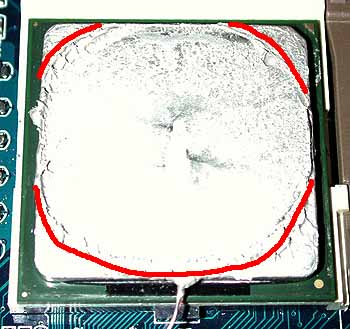 I outlined the contact patch in red. This is because the copper core is slightly raised above the aluminum fins.

The Sun Flower mounts on the standard Intel PIV base (included). The legs clip into the side slots and top levers secure it against the CPU – very secure. The lip on the four mounting lugs is a tad on the high side, making dis-mounting a little harder than I would like, but not terrible.

The fan is a 70 x 15mm, rated at 33 cfm @ 5000 rpm. I measured its noise at 64 dBA with a Radio Shack sound meter 8″ from its intake, about as loud as the YS Tech 26 cfm (note: Manufacturers measure fan noise at something like 3 feet away, so comparisons to their dBAs are not valid).

Overall, the AVC Sun Flower appears well made and is an elegant design.

The Sun Flower was tested per the Intel Specification for Heatsink Testing. I have modified a PIV 1500 (57.9 watts) which allows me to read directly PIV Case Temperatures with a thermocouple. The thermocouple is attached to an Omega HH23 Digital Thermometer. Ambient temps were measured with a thermocouple placed about 1 inch from the fan’s intake.

I used Prime 95 to stress the CPU on a Lucky Star P4A845D. Arctic Silver grease was used in all tests. CPU Case Temp is the temp of the CPU’s top metal cap and MBM Temps are Motherboard Monitor readings from the PIV internal diode.

In addition, the Sun FLower was tested on the Simulated CPU Die Tester. This is the “purest” test of a heatsink’s performance as extraneous factors, such as secondary heat path effects, are not included, which may or may not be beneficial to performance. Heatsinks with high airflow, for example, will generally perform better on motherboards due to higher secondary path cooling on the motherboard.

The Sun Flower distributes air off the heatsink in an omni-directional pattern. This contributes to its effectiveness by cooling secondary heatpaths, such as capacitors and the passive heatsink on the northbridge chip. Performance is quite good, especially compared to Intel’s retail heatsink. These results place the AVC Sun Flower in the upper rank of PIV heatsinks we have tested (Heatsink Rankings HERE).

Thanks again to AVC for sending this our way. The Sun Flower is available at Cooling Gears.