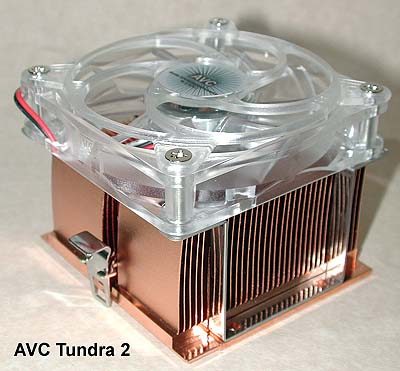 The kind folks at AVC were nice enough to send a sample of their latest heatsink, the AVC Tundra 2. This is a copper skived unit with a 70 mm AVC fan featuring transparent hub and blades. The fan blades (9) feature an angled tip:

It’s an effort to prevent the formation of tip vortex as a means to reduce noise.

The fan sits on four legs and is raised above the heatsink – another effort to reduce noise.

The base is well finished but not highly polished: 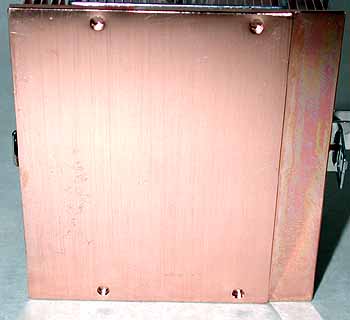 The clip is a good one – it engages one lug on each side of the socket and can be mounted by hand – no screwdriver required.

In summary, a copper skived heatsink with a very easy to use, secure clip.

PS: Included with the Tundra 2 is this magnet: 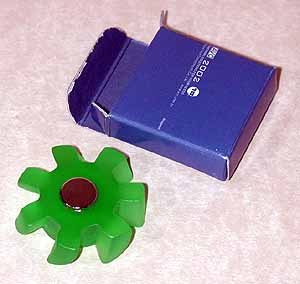 You can use it to hang something on your refrigerator; under NO circumstances use it around your PC – the magnet is a good one and can probably wipe a drive if it gets close enough.

The Tundra 2 was first tested on the CPU Die Simulator which gives results that are unaffected by motherboard influences. I then tested it on an Iwill KK266+, modified to read AMD’s on-die diode, as an example of what users might see on their systems.

The AVC Tundra 2 is an OK cooler for non-aggressive cooling. The magnet is a good one, but keep it away from your PC.