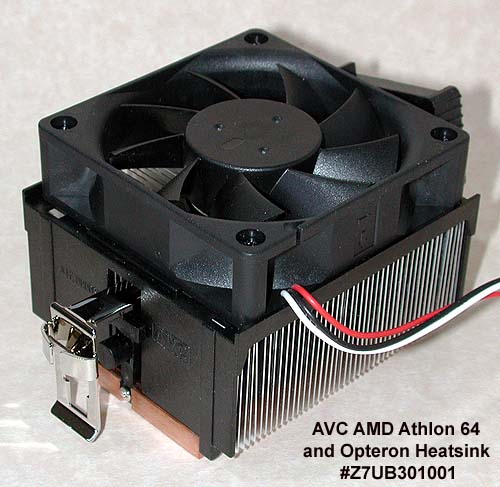 The good guys at AVC were nice enough to send their latest heatsink for AMD Athlon 64 and Opteron for a test spin, the AVC #Z7UB301001

The base is not very well finished: 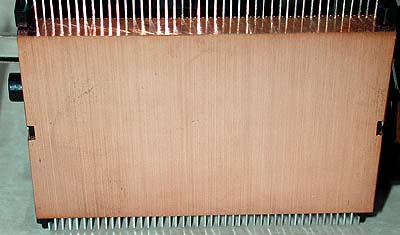 When I ran my nail over it, I could feel ridges – they are also quite visible.

The mount features a backing plate: 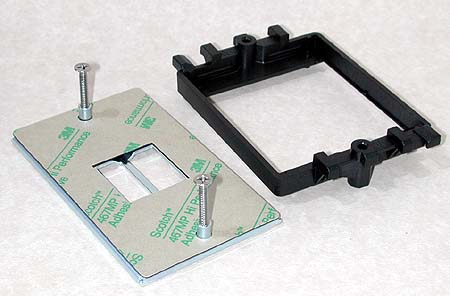 The “3M Performance” is protective paper for the sticky tape on the base plate; once installed, the backing plate should not move. The heatsink is held on by a lever

which swings down to engage a clip on the mounting base – very secure and simple to mount. This heatsink ships with a TIM which was removed for this test.

The AVC was tested on the CPU Die Simulator which gives results that are unaffected by motherboard influences. For testing, I varied voltages to give a range of rpms so users might have a better understanding of noise levels under different load conditions.

Sharp-eyed readers will notice that fan rpms, under different power loadings, did not vary; the design of most thermally controlled fans places the thermistor in the fan’s hub, as does the fan for this heatsink: 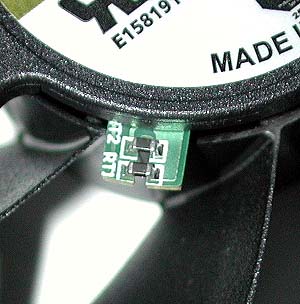 However, in a closed case, ambient temps may increase as power increases due to heat dumping into the case. In this situation, you will most likely hear an increase in rpms as you stress the CPU. Also note that C/Ws do not substantially change with power load – heatsinks deliver the same C/Ws regardless of power load (under spec loading).

AVC’s #Z7UB301001 is an OK choice for AMD 64 bit cooling, although I would not use it for aggressive cooling. For “normal” use where CPUs will not be overly stressed, AVC’s #Z7UB301001 looks like a good choice.

¹Note that manufacturers measure fan noise usually 3 feet from the fan; I measure noise 8″ from the fan’s intake.
²There may be limited thermal feedback from the heatsink, but this does not correlate well with CPU temps.

How to Mod a Senfu Waterblock