A few years ago, there was a standard, ISA, Industry Standard Architecture. Anyone who’s seen the guts of an older computer will tell you there is something different about these cards compared to the new PCI and AGP cards. They’re backwards. Or rather, perhaps PCI and AGP are the ones that are backwards.

Look at how airflow works in an ATX case, which is by far the most widespread used case standard today. Generally, air comes in the front, passes over the components, and is exited out the back of the case: 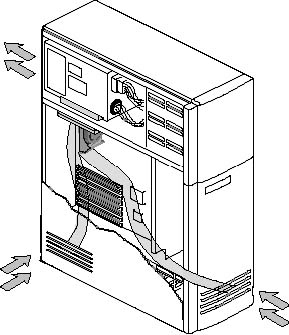 This is a picture of my current graphics card, an ASUS V9570 TD: 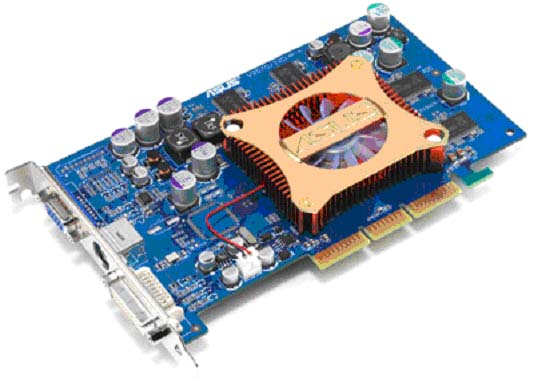 A nice looking card, and some thought was put in to the heatsink to make it look good, but there really is no point in the heatsink looking good except to sell the card. All AGP and PCI cards face downwards in the slots on motherboards. What you end up seeing when you open your case is the back of the card. Now, this is a minor problem, but still. It would be nice to have your expensive high end card that screams detail viewable when you look through your window.

The bigger problem is for those who insist on keeping their computers cool with air:

The GPU is on the part of the card that faces down.

The fan is over top of the GPU. Hence, the airflow is either sucked in from the sides of the card or directly above the fan. In some systems that rely on onboard equipment, this may be no big deal. But in a loaded computer, there are often cards directly below graphics card. In the case of some heatsinks, they require an extra slot to exchange air. In most cases, you lose the PCI slot directly below the graphics card simply due to cooling. Even with watercooling, I still lose the PCI slot under my AGP slot.

But it doesn’t have to be this way. As I mentioned earlier, ISA cards faced in the opposite direction. Hence the GPU would be facing up, the heatsink that required a lot of thought and effort to create, build, and look cool would be viewable when the case was opened or via a window. The card would no longer expel heat towards another card, heating up the lower left portion of the case. The fan could be set to blow air upwards, towards the rear case fan and outside of the case.

Clearing the airflow up by switching the way a graphics card facing may not be as easy as I make it seem, I don’t doubt. But it’s been done in the past and it can be done again. And somehow, when companies can put 222 million resistors in a square inch, I have faith that they can switch the way a card faces.

Now that GPU’s are hitting 500 and more MHz, we’ll soon run into the same problems that we had with CPUs:

A lack of proper cooling.

RAM on the cards already requires active cooling. We now have PCI-Express graphics cards coming, but from what I see, they still face downwards. The only PCI-Express card I have seen is HERE, but I have hopes that eventually, Nvidia and Ati will come to their senses and turn their cards around.

I saw this posted in our Forum and thought it would be make for interesting reading – Joe. I’m new to Overclockers.com’s Forum, so I’d like to say Hi! to everyone and tell you a little about my long road

The Road To Sempron

90nm Semprons should start showing up in a few weeks, maybe as soon as next week. We mentioned a little while back that we thought Semprons would be the way to go for the average person reading this. The initial